The European Central Bank announced on Thursday that it is moving interest rates into negative territory, charging banks for maintaining deposits with the ECB rather than paying the banks positive interest. The hope is that lower (now even negative) interest rates may provide some stimulus to the European economy which might help bring European inflation closer to the ECB’s 2% target. Here I offer a few thoughts on this move.

Let’s start by clarifying what the measure will not do. The measure is not intended, as many people seem to suppose, to get banks to “lend out” their ECB deposits. The reason is that when an individual bank makes a loan or buys an asset, what they do is instruct the ECB to transfer the deposits from their account with the ECB to the bank of the counterparty who received the loan or sold the assets. The deposits of Bank A go down, but those of Bank B go up, with the result that some bank somewhere must always be left with those deposits at the end of the day. Actions by the ECB itself, or direct borrowing or cash withdrawals by banks from the ECB, could change the aggregate level of deposits that banks hold in their accounts with the ECB. But the lending and investment decisions of individual banks would not change aggregate ECB deposits.

But that doesn’t mean that individual banks won’t try to free themselves from this extra cost. If you know you’re going to be charged 0.l% (at an annual rate) for deposits you end up with at the end of the day, but see a 3-month government security paying say 0.2%, you’d want to buy the security on the open market. When Bank A makes that purchase, it gets itself out of a 0.1% loss and into a 0.2% gain. But Bank B receiving the deposits will realize that they’d also be better off using those deposits to get the 0.2% return, so they’ll also be buying any short-term securities that yield 0.2% in hopes of not getting stuck paying a fee on deposits. None of these efforts will change the fact that some bank somewhere will be left at the end of the day paying the 0.1% fee. But if all banks are out there trying to buy short-term government securities as a result of these incentives, what’s likely to happen is that the price of short-term government securities gets bid up above par. Once that happens, the 3-month securities effectively offer a negative return just like deposits with the ECB, and banks would be indifferent between buying the government security and getting stuck with the bill for reserves. For example, that’s what we saw happen to the 3-month yield when Denmark’s central bank implemented negative deposit rates in July 2012, an experiment that the Danes abandoned this April. 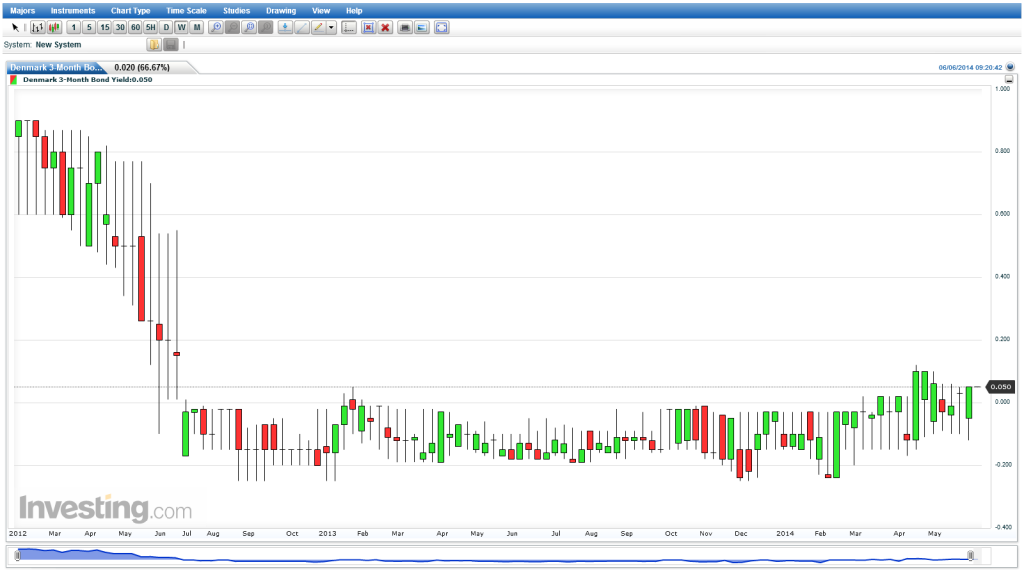 But if 3-month government securities only offer a negative return, banks might then also bid the yield on longer-term government bonds down, or be willing to lend to customers at lower rates or make higher-risk loans than they otherwise would, or try to buy assets denominated in something other than euros, driving the value of the euro down relative to other currencies. Again none of these efforts would change the aggregate volume of deposits, but instead would shift the entire constellation of returns to be consistent with the new -0.1% rate at the short end of the yield curve. The hope is that more borrowing, inflated asset values, and a weaker currency might all encourage more spending and ultimately help the ECB achieve its 2% inflation target.

Though speaking just for myself, an extra 10-basis-point spread on Greek debt relative to German bonds wouldn’t make me any more keen to be holding the former, despite the insult of taking a sure (but small) loss on the latter.

And of course there’s a fun game for an enterprising entrepreneur here. Offer a bank (or anybody else settling for a -0.1% return) a service where you’ll accept physical cash from them and hold it for 3 months for a 5-basis-point annual fee. You take the cash and simply hoard it for 3 months. You earn 50 cents on every $1000 over the year playing entirely with somebody else’s money. The bank gains too, being better off paying you 5 basis points than paying the ECB 10 basis points. The New York Times reported this quip on negative interest rates from Harvard’s Greg Mankiw:

the only thing you’ll generate is a demand for safe assets– and by that I mean . . . they’re going to be buying a bunch of safes so people can put their money in their safes rather than in the bank.

And there are some obvious downsides to the ECB’s strategy. For starters, it’s unambiguously a tax on the banking system that undermines efforts to replenish capital buffers. If you have concerns about financial stability, such a move is contraindicated. A variety of institutions– money market funds, customers’ accounts with private banks, brokerage accounts– are all set up on the assumption that the customers won’t lose any money held in those accounts. Remember that “breaking the buck”– the possibility that investors would discover they’re vulnerable to a capital loss on money market funds– was a key concern of U.S. policy-makers in 2008 as something that could have triggered a run on some financial institutions and instruments.

It may be possible that the measure matters more as a signal of future ECB intentions beyond the direct effect of lowering the short end of the yield curve by another 10 basis points. Certainly the mere announcement two years ago by ECB President Mario Draghi that he would do “whatever it takes” to preserve the euro seemed to have a pretty dramatic effect, even if nobody was quite sure what that expression meant.

This week I think we learned that it means, “whatever I can think of.”