On Friday the Bureau of Economic Analysis released its second estimate of U.S. 2015:Q1 real GDP growth. The BEA now estimates that the economy contracted at a 0.7% annual rate rather than grew 0.2% as originally estimated. The number is discouraging, though I see some silver linings.

The primary factors that brought GDP growth down from the BEA’s original estimate were stronger growth of imports and a smaller inventory build than originally anticipated. Both components can be volatile, and I would not interpret the latter as a sign of fundamental weakness. 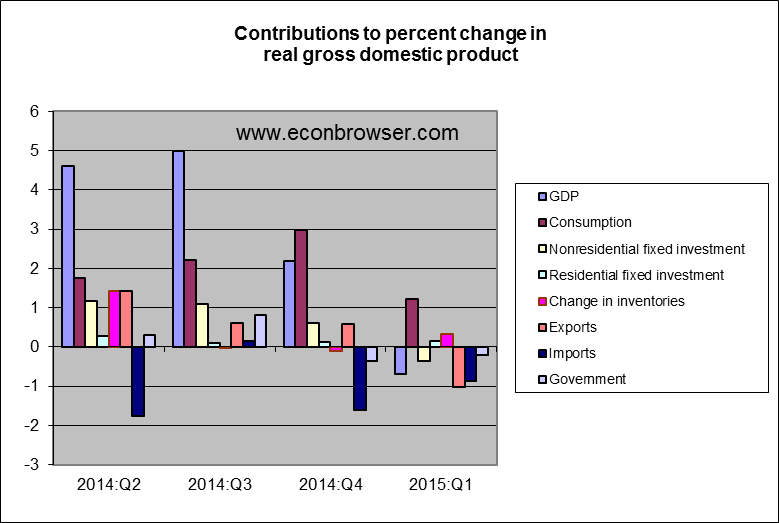 The new BEA data also allow us to calculate an alternative estimate of GDP, building the estimate up from income data instead of expenditures. In terms of the underlying concepts, the income-based and expenditure-based calculations should produce the identical number for GDP. But because the data sources are different, in practice the two estimates differ, with the difference officially reported as a “statistical discrepancy.” While the expenditure-based GDP estimate showed a 0.7% decline at an annual rate, the income-based GDP estimate implied 1.4% growth for the first quarter. Moreover, using the statistical method for reconciling and combining the different estimates proposed by Aruoba, Diebold, Nalewaik, Schorfheide, and Song (ADNSS), the best estimate of first-quarter real GDP growth based on the existing data might be about 2%. Another factor contributing to the weak first-quarter GDP number was harsh winter weather. This is becoming a pattern, with the “seasonally adjusted” Q1 estimates coming in consistently below the other three quarters for the last decade. Jason Furman had this comment:

The debate so far over the cause of first-quarter underperformance has tended to treat residual seasonality and weather effects as analytically distinct explanations. However, to the extent that worsening winter weather is part of a long-term trend rather than a random occurrence, changing weather patterns may be related to residual seasonality. A seasonal adjustment algorithm should adjust for effects of normal weather within a particular quarter—and to the extent that global climate change leads to a new “normal” for weather, seasonal adjustments will eventually catch up. 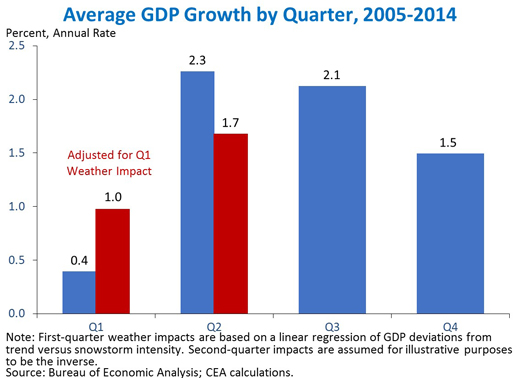 Many analysts seem tempted to simply brush aside the contraction in real GDP in [the first quarter] as a function of transitory factors– harsh winter weather, the port strike– that will have no lasting effect. We caution against treating the first-quarter GDP data so cavalierly, as doing so overlooks the more structural forces that weighed on the economy in [the first quarter]– the ongoing pullbacks in job counts and investment in the energy sector and related industries, still uncertain global growth prospects, and the stronger U.S. dollar.

It’s certainly true that signs of weakness are not just showing up in GDP and are not confined to the first quarter. The latest numbers on industrial production, retail sales, and durable-goods orders all suggest the economy may have hit a soft spot that extended into April. 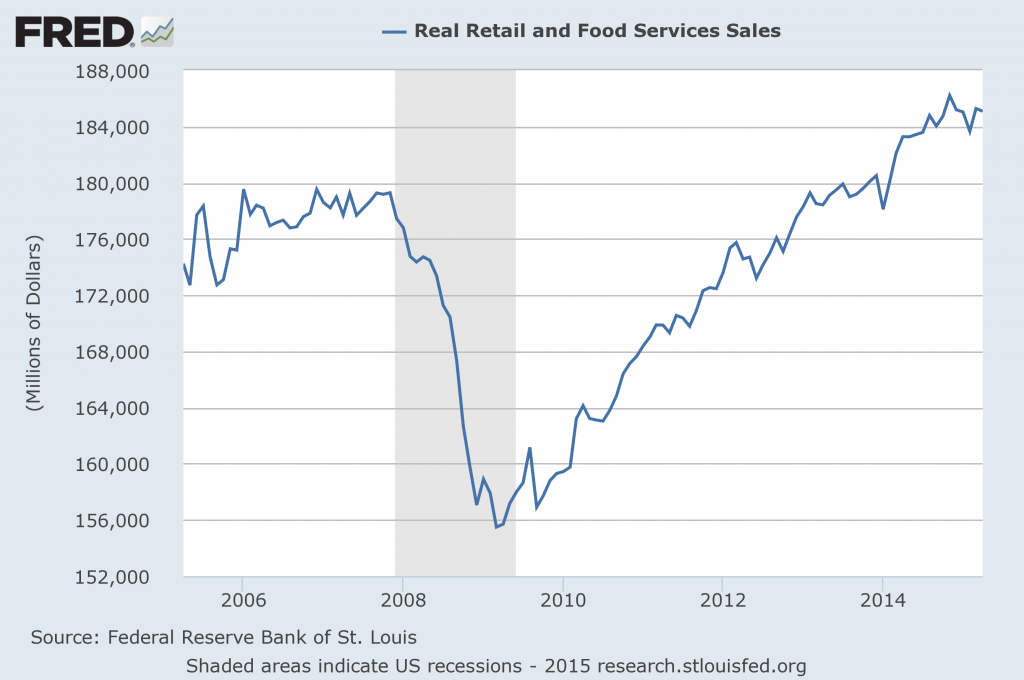 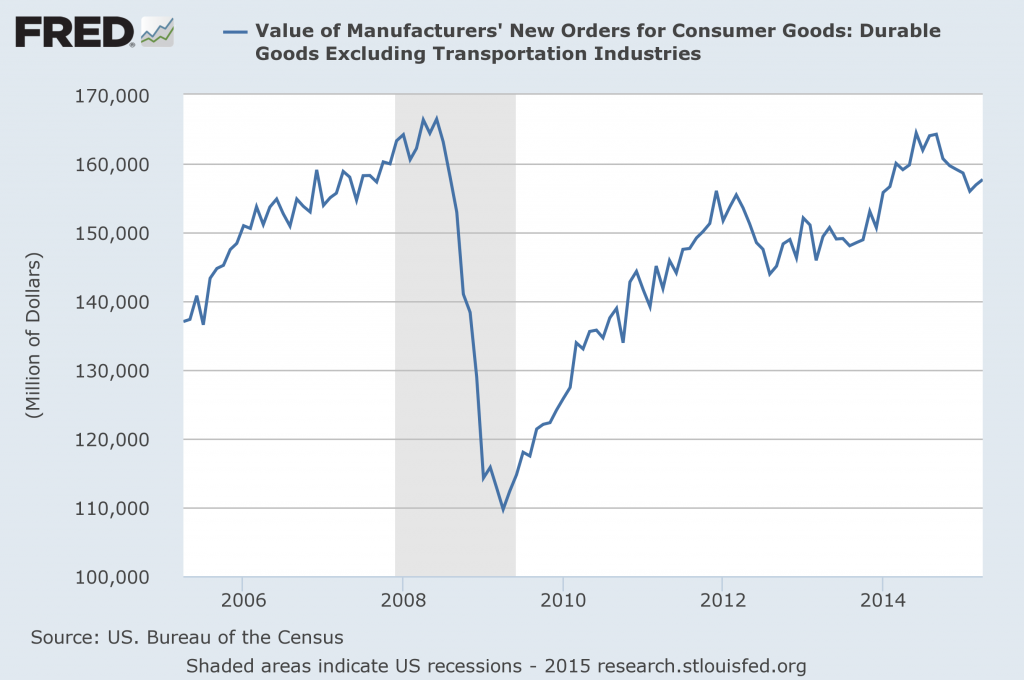 But Bill McBride explains why he’s still sanguine about housing: 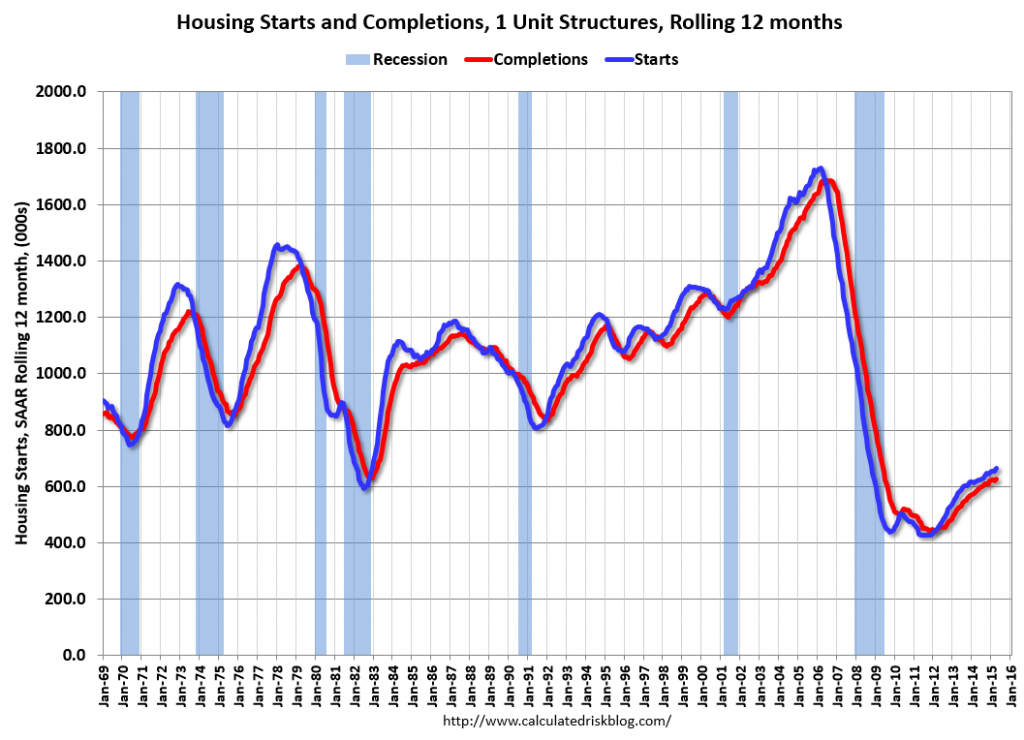 But the key is ongoing gains in employment, which still show solid momentum that should carry the economy forward. 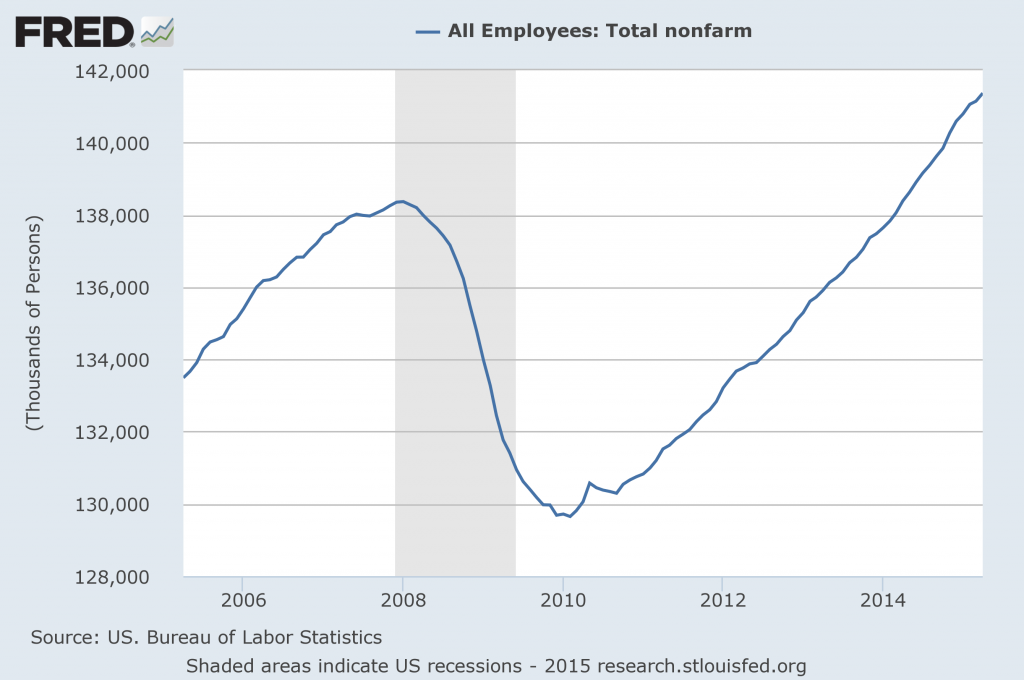 Overall, I can’t quarrel with this summary by Council of Economic Advisers Chair Jason Furman:

The first-quarter slowdown was the result of harsh winter weather, tepid foreign demand, and consumers saving the windfall from lower oil prices. The combination of personal consumption and fixed investment, the most stable components of GDP, has grown 3.4 percent over the past four quarters. This solid long-term economic trend complements the robust pace of job growth and unemployment reduction over the last year. 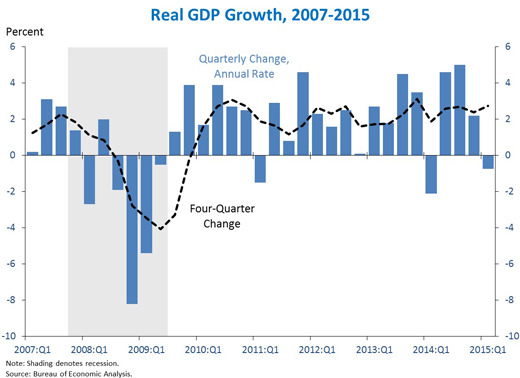 33 thoughts on “Current economic conditions: not as bad as it sounds”