How much does the U.S. government owe? The number that is subject to the recurrent debt-ceiling wrangling includes intra-government debts that the Treasury is imputed to owe to other Federal government operations. For example, Social Security taxes have historically exceeded benefits paid out. The surplus was used to pay for other government programs, and the Social Security Trust Fund was credited with corresponding holdings of U.S. Treasury securities representing the accumulated value of those surpluses. Many of us think of this as an I.O.U. that the government issued to itself. Economists usually subtract those intra-government debts when talking about the size of the federal debt, relying instead on the Treasury’s measure of debt held by the public. Although many of us have made use of the latter numbers in academic research, policy analysis, and lectures to our students, those data are also getting less reliable in recent years.

Here for example is a graph of the official numbers for U.S. debt held by the public at a monthly frequency. It has the rather astonishing implication that the U.S. Treasury issued over half a trillion dollars in net new debt to the public in the month of November 2015 alone. 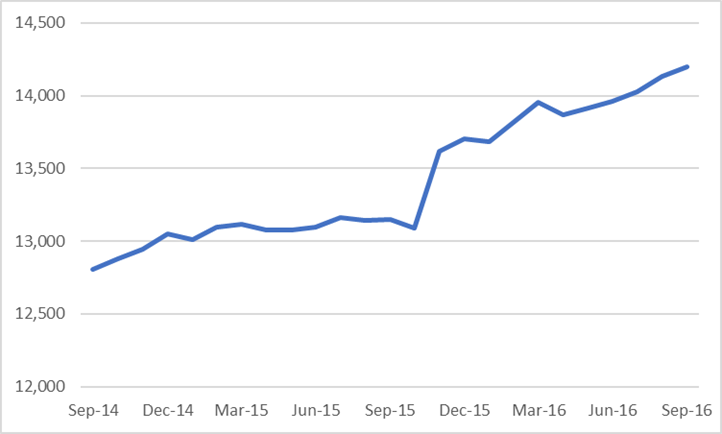 Recent theories that claim that quantities of government debt held by the public may matter for interest rates– for example, the entire theoretical underpinning of the large-scale asset purchases conducted by central banks around the world over the last decade– would have quite a challenge explaining how such a volume of new debt could be absorbed by private buyers with nary a ripple in bond markets. Who bought a half-trillion dollars’ worth of new Treasury securities within the space of a few weeks?

Digging a little deeper into these numbers, we find from Table 6 in the November 2015 Monthly Statement of the Public Debt that the Civil Service Retirement and Disability Fund increased its holdings of Treasury securities by $139 billion that month– a 19% increase. This is a defined-benefit retirement program that Federal employees pay into, which, like Social Security, has so far had an inflow of funds greater than payments, with the surplus used to invest in Treasury securities. Federal employees also have the option of investing their own money in a Thrift Savings Plan, similar to a 401(K). The holdings of the Thrift Savings Plan in Treasury securities jumped up $207 billion in November 2015.

The explanation for this lies in the extraordinary measures that the Treasury has come to rely on when Congress does not authorize an increase in the debt ceiling, as was the case in the fall of 2015 and as we are facing again now. When Congress has called for spending in excess of tax receipts (as it did in both instances), of course something has to give whether or not Congress has separately authorized additional borrowing. The Civil Service Retirement Fund and Thrift Savings Fund are two of the main cookies in the jar that the Treasury has relied on to square the circle. Specifically, during a “debt issuance suspension period,” the Treasury temporarily suspends reinvestments of these funds in new Treasury securities. Here’s the description on page 16 of the Civil Service Retirement Fund’s 2015 annual report of what this meant:

instead the amount suspended, $140.6 billion for the CSRDF, was recorded in Fund Balance with Treasury instead of Investments in Government Securities,

which I interpret as replacing Treasury debt with more I.O.U.’s, as a way to artificially reduce the volume of officially acknowledged Treasury debt. Of course CRSDF was perfectly willing to “buy” $140 B in new securities once the shenanigans were lifted when the debt ceiling was eased in November, namely converting the Fund Balance back into regular Treasury obligations.

I draw two lessons from all this. First, users of the recent federal debt data need to be very careful– off-balance-sheet asterisks are more important than ever. To update Everett Dirksen, a hundred billion here and a hundred billion there, and pretty soon you’re talking real money.

25 thoughts on “Treasury debt held by the public”