The Bureau of Economic Analysis announced today that seasonally adjusted U.S. real GDP was 9.5% lower in the second quarter than it had been in the first quarter, which they reported as a decline at an annual rate of 32.9% (0.9054 – 1 = -0.329). That is four times as large a quarterly decline as anything since the BEA began reporting quarterly GDP in 1947, and represents a 10 sigma (10 standard deviations) event. 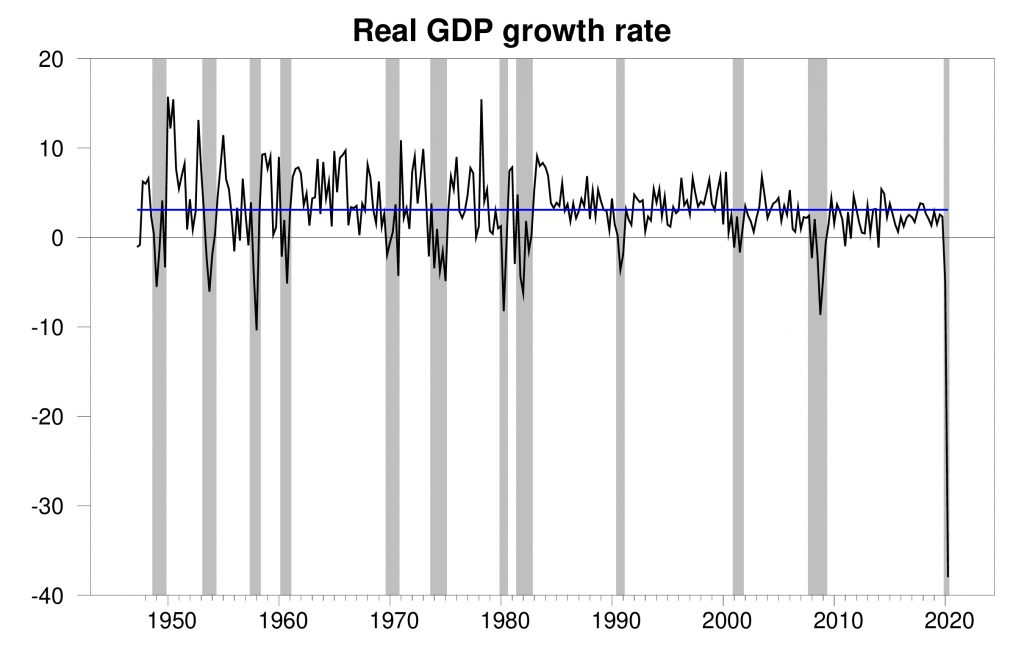 I’ve been reporting a GDP-based recession indicator index each quarter since we started the blog in 2005. What I’ve been doing up to this point is re-estimating the parameters of the model (the numbers that describe what happens in a typical expansion or a typical recession) every time a new GDP observation gets released. If you try that with the data set from 1947:Q2 through 2020:Q2, the latest drop is so dramatic that the maximum likelihood estimates would put 2020:Q2 in a class all by itself, a severe recession unlike anything seen previously. What I have done to keep the index going is to fix parameters at the values estimated as of 2020:Q1 and interpret the 2020:Q2 data from the perspective of the historically observed patterns. This calculation results in a value for our recession indicator index for 2020:Q1 of 97.1. In other words, based on the historical record of GDP growth, the current numbers would lead us to conclude that there is a 97.1% probability that the twelfth postwar recession in the United States began in the first quarter of this year. This is not surprisingly the same conclusion that the Business Cycle Dating Committee of the National Bureau of Economic Research reached on June 8. The NBER declaration is a judgmental interpretation, whereas our index is a purely mechanical summary of the GDP data alone. As usual, the two approaches reach a very similar conclusion, though ours needed to see the 2020:Q2 GDP release to be able to make a definitive call. 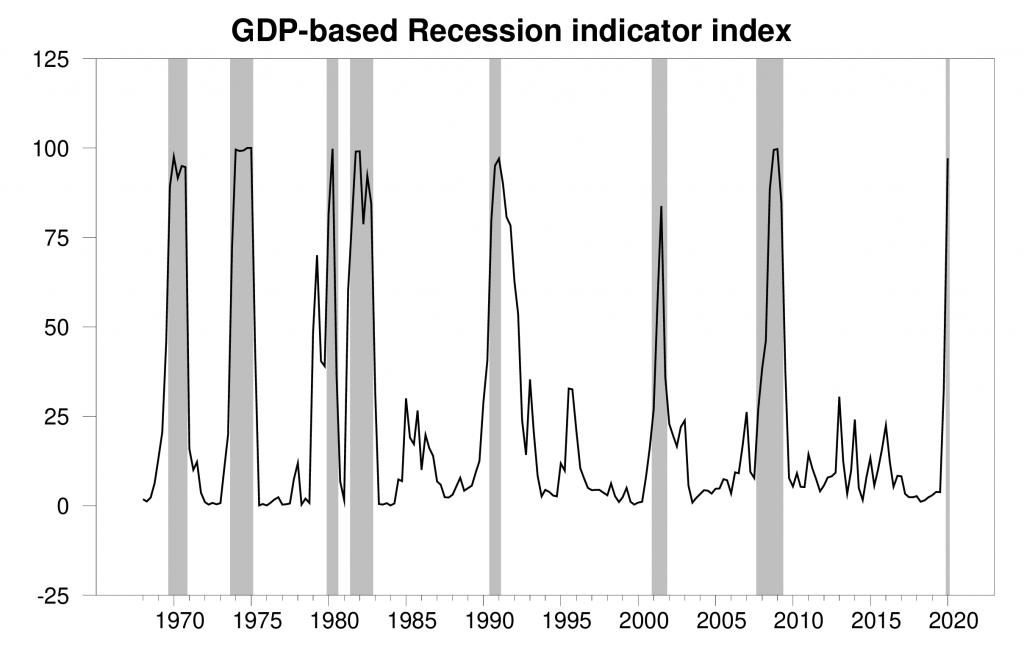 GDP-based recession indicator index. The plotted value for each date is based solely on the GDP numbers that were publicly available as of one quarter after the indicated date, with 2020:Q1 the last date shown on the graph. Shaded regions represent the NBER’s dates for recessions, which dates were not used in any way in constructing the index.

The drop was across the board in terms of the traditional components of GDP. Consumption spending was the single biggest factor in the drop, offset a bit by the fact that a significant part of the lower consumption spending came in the form of lower spending on imported goods. But even if consumption and imports had held constant, lower fixed investment alone would have led to a -5% annual GDP growth rate, and lower exports by itself would have produced a GDP annual growth rate of -10%. 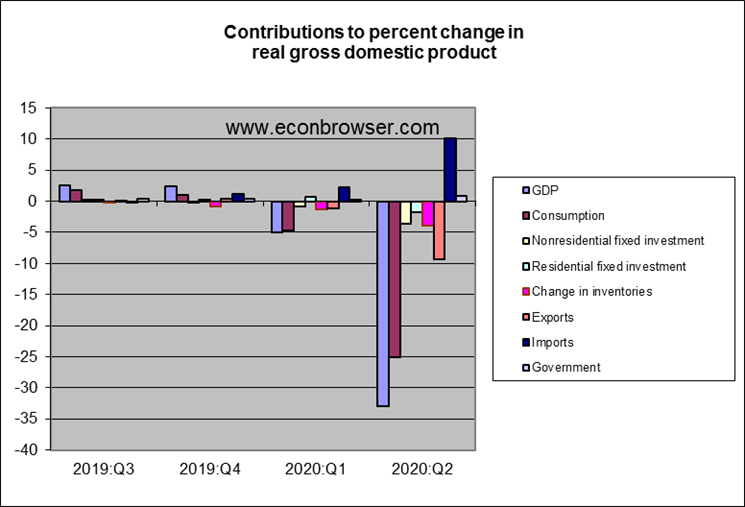 It’s also helpful to break down the consumption spending. Spending on consumer services accounts for 47% of GDP. Service spending is usually quite stable even in severe recessions, while durable spending takes the brunt of the cutback. Not so this time. Durable spending was about the same in Q2 as in Q1, while services fell 43.5% at an annual rate. Investment spending is usually the biggest factor in a typical recession. The drop in residential and nonresidential fixed investment this time is similar in absolute size to what we see in other recessions. It only looks small in the graphs above in comparison to what happened to services consumption. 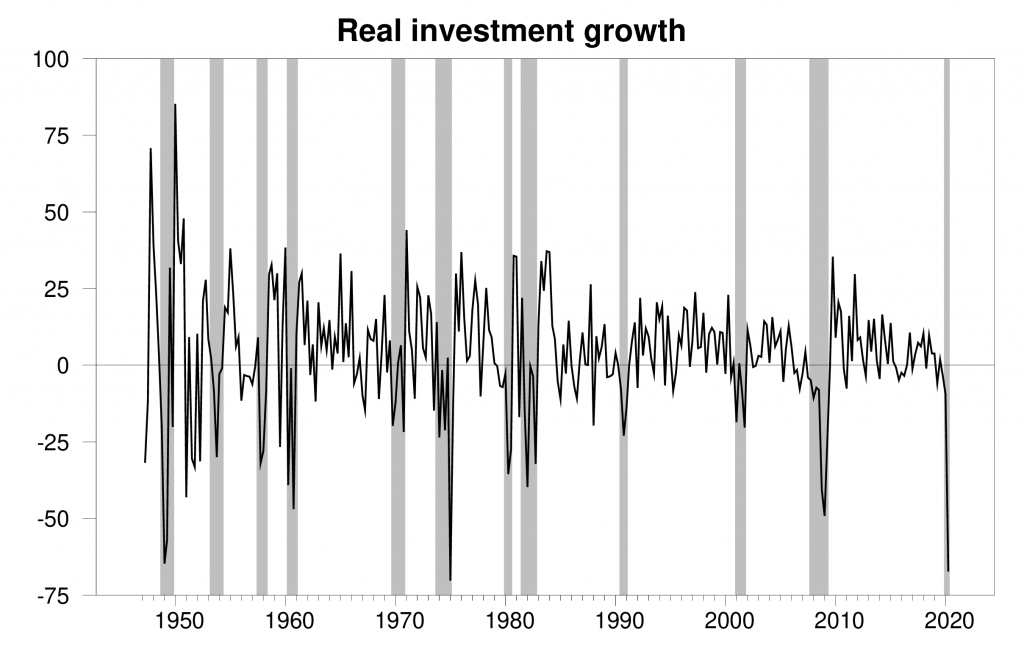 Percent change in real investment spending at an annual rate.

The biggest single factor in lower services spending was health care, as people stayed away from doctors, dentists and hospitals as much as possible. That presumably will rebound. But other categories of spending, such as restaurants, hotels, recreation, and air travel could take quite a while to recover. 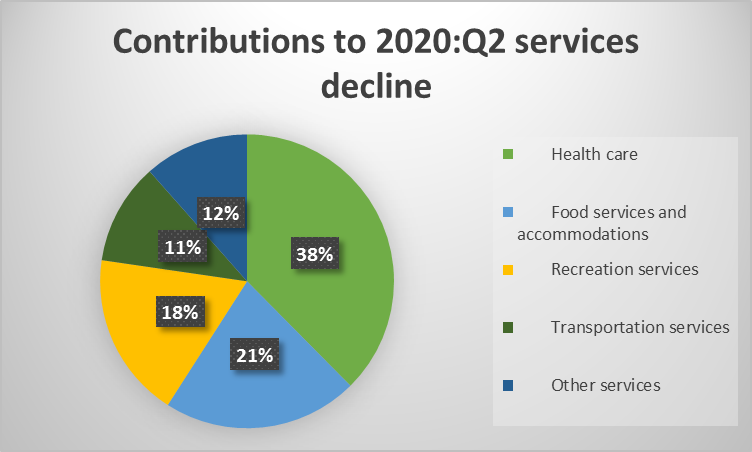 Where do we go from here? The increase in the unemployment rate in April was the biggest increase on record. But the drop in June was also the biggest decrease on record. I would not be surprised to see something similar with GDP. Almost mechanically, real GDP in the third quarter has to be a bigger number than the second quarter. So, we may have seen the bottom, at least as far as GDP is concerned. But it could be a long time before we’re looking out over the top again. 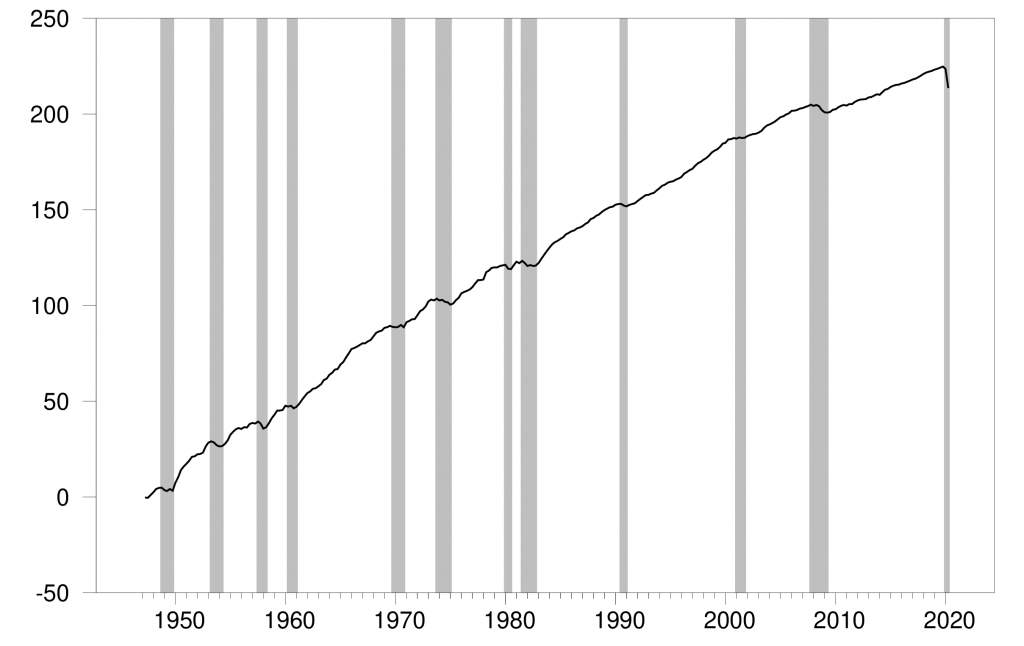 Cumulative change since 1947:Q1 in 100 times the natural logarithm of U.S. real GDP.

77 thoughts on “Record-breaking drop in GDP”