In Suskind’s The Price of Loyalty, Paul O’Neill attributes to Dick Cheney the statement that “Deficits don’t matter. Reagan proved that.”

Given that the US government has been, and is running for the foreseeable future (see here), large deficits against a backdrop of low household savings without nary a budge in long term interest rates, one might think that Vice President Cheney’s conclusion is correct (although it must be said that he denies having made this remark). A variety of studies suggest that debt and deficits matter, but these effects have been masked by the tendency of foreign monetary authorities and individuals to save U.S. Treasuries. (Note that there is some evidence that long term rates are now finally rising despite this effect of capital inflows.)

A recent (2/17) Deutschebank study finds a significant role for current budget deficit and the current government debt stock (as a share of GDP). When log Asian foreign exchange reserves are included, the model predicts the current long term interest rate within 30 bp (as opposed to 130 for the standard model).

Similar results are obtained in Chinn and Frankel (2005), and Warnock and Warnock (2005). In the first instance, the debt-to-GDP ratio expected two years ahead has a positive and statistically significant coefficient; a model excluding foreign official intervention overpredicts the US long term rate by about 200 bp. When official purchases are included, the coefficient on this variable is negative and statistically significant. In the second instance, Warnock and Warnock’s study uses the deficit-to-GDP ratio, the fed funds rate (and so addresses the “conundrum”), and more refined and up-to-date asset data. They find that excess capital inflows account for about 105 bp of the deviation of long term interest rates from the predicted value from a baseline model. 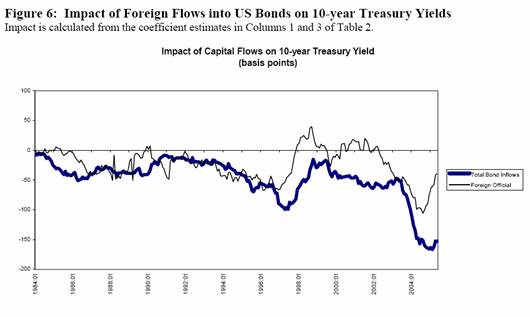 
(The dark line is the deviation due to all capital inflows, while the narrow line is that attributable to official capital inflows.) All this suggests that if there is a cessation of above average capital inflow, if combined with chronic and incipient budget deficits, will lead to a substantial increase in long term interest rates. Of course, this effect may be masked in the immediate future by an economic slowdown or recession that depresses private demand for credit.

8 thoughts on “Do (budget) deficits matter?”