The 2007 Economic Report of the President was released Monday afternoon. Chapter 7, entitled “Currency Markets and Exchange Rates,” is a laudable exegesis on the determination of exchange rates. 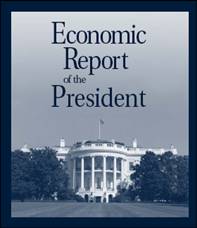 After an extensive primer on interest rate parity and purchasing power parity, there is this discussion:

For a long time, China had a fixed exchange rate with the United States. To maintain its fixed exchange rate, the Chinese government had to stand ready to buy or sell yuan, China’s domestic currency, for U.S. dollars at a fixed price. From 2000 to July
2005, this price was set at approximately 8.28 yuan per dollar. Over this time period, Chinese productivity growth was much higher than U.S. productivity growth and Chinese prices on average grew much more slowly than U.S. prices. High productivity growth implies a high return to investment in China relative to the United States. The slow growth of Chinese prices implies that, holding the exchange rate constant, Chinese goods were becoming cheaper relative to goods in the United States. Therefore, both in terms of maintaining interest rate parity and in terms of maintaining PPP, there was pressure for the yuan to appreciate relative to the U.S. dollar. How did the Chinese authorities prevent the appreciation?


The Chinese authorities prevented the appreciation by buying U.S. dollarsand exchanging these dollars for yuan. The pressures for appreciation of the yuan implied that the yuan was facing higher demand — that more goods could be purchased for dollars converted to yuan, and investments in China delivered, on average, a higher return. To offset the increase in demand, the Chinese government effectively increased the supply of Chinese assets and decreased the supply of U.S. assets. Chinese foreign-exchange reserves increased from around $150 billion in early 2000 to almost $1 trillion by September 2006, a truly remarkable increase. In other words, the Chinese prevented an appreciation of the exchange rate by effectively printing yuan and using those yuan to accumulate U.S. dollar assets.


By fixing the exchange rate, the Chinese monetary authority is unable to use monetary policy for any other goal. By printing yuan, the Chinese raise the amount of currency in the country, which in turn, holding all else equal, raises the domestic price level, thus raising the economy’s inflation rate.


But if they are just printing enough to buy and hold U.S. assets, from where does the domestic price pressure arise? The price pressure arises as the yuan, which are used to purchase the dollar assets, flow back into the Chinese economy. In other words, the prices increase because of foreign demand for Chinese goods. On the surface, this foreign demand appears to arise as a result of the Chinese exchange-rate regime; however, this demand is the same demand which was originally putting pressure on the Chinese exchange rate. At the old prices, there was not enough supply of Chinese goods to meet all of the demand. Because the exchange rate was unable to adjust, the price of Chinese goods had to adjust.


Could the Chinese conduct a monetary operation to lower inflation? To lower inflation, the Chinese would need to remove yuan from circulation, perhaps by selling domestic bonds. This transaction is sometimes referred to as sterilization. The action, however, will tend to raise the value of the currency: the currency would become scarcer as a result of the reduction in supply. As the currency becomes more valuable the foreign-exchange value of the currency would tend to appreciate. Any monetary action the Chinese undertake to reduce domestic inflation tends to undo their exchange-rate intervention (see Box 7-4).

I think of this exposition as basically the Monetary Approach to the Balance of Payments [ppt] (see a longer exposition here [pdf]). In this view an excess of money supply can only induce a short term trade surplus, if the exchange rate is held fixed. That is because over time, the price level will rise to reassert equilibrium.

In Richard N. Cooper’s famous discussion of three views of the effects of devaluation (“An Assessment of Currency Devaluation in Developing Countries” (1971)), he pointed out that the elasticities, absorption and monetary approaches to the balance of payments roughly corresponded to the short, medium, and long run horizons. How is that point relevant to the question of China’s case?

Well, this means that while the ERP‘s reasoning is not incorrect, I wonder whether their conclusion that the peg is irrelevant to relative prices applies in a meaningful way to the time horizons we’re interested in — namely over several quarters to several years.

Really, the equivalence result holds immediately if prices are as flexible as exchange rates. If you are a believer in sticky prices as an empirical phenomenon, then you might question the equivalence result posited in the ERP. Furthermore, while it may be the case that sterilization (which China has been pursuing vigorously) does raise interest rates and hence the attractiveness of a currency, extant capital controls and financial repression might allow for effective sterilization.

So, in my view, the Mundell-Fleming model (IS-LM-TB) with low capital mobility is a more appropriate way to analyze the implications of the Chinese peg and managed float (see here [pdf]). In the short term, the real exchange rate can be affected by the exchange rate regime.


That being said, neither approach says anything about what constitutes currency manipulation (although the Mundell-Fleming model would suggest that the current value of the renminbi is not attaining internal or external equilibrium).

See here for a discussion of last year’s international finance chapter of the ERP.