Last week, I wrote a post examining what the measures of central tendency for the dollar’s trajectory were, based upon some standard forecasts. This week, I want to examine more closely whether we should anticipate more depreciation, in real terms, by way of discussing alternative measures of the dollar’s value.

As I’ve discussed in elsewhere [pdf], most real measures of currency values weight by some measure of economic interlinkages. While some more recent ones are linked to assets or liabilities, the most common by far is the trade-weighted measures. The standard ones, including the IMF’s, the BIS’s, and the Fed’s, are based upon changes in bilateral real rates. That is, the index is based upon a base period, then changes in bilateral real rates are weighted by trade flows, and added to that base value. This calculation is discussed in this post.

While this calculation makes a lot of sense, it has several interesting attributes, one of which is best highlighted by an example. Suppose the US trades with a country — call it X. Suppose the bilateral real exchange rate against X stays constant, but the amount of trade between the US and country X increases dramatically. Invoke ceteris paribus, and in the standard calculation, what will happen is that the overall measured index of currency value will be unchanged.

What happens if instead one calculates using levels of exchange rates in real, common terms? As recounted in a previous post, the trend value of the US dollar looks a lot different. The series I’m going to rely upon is the (revised) Thomas-Marquez-Fahle [pdf] index [Note: This measure of U.S. international relative prices is not officially produced by the Federal Reserve Board. In other words, it is not the FRB-measure of U.S. international relative prices.]

I’ve rebased both the standard Fed real broad index of the dollar’s value and the Thomas-Marquez-Fahle index to 1985q1=0 (in log terms). What becomes obvious is that the dollar peak in 2002 was as high as that in the mid-1980s. What’s the implication then (this is my interpretation)? That the dollar was — and remains — relatively strong. Rebasing the series to 19851, one finds the two series have diverged by 18.4% (in log terms). Of course, this calculation is not insensitive to when one rebases the series — if one rebased them to equal 0 in 2002q1, the gap would be only 5.4%. The point is that, taking into account levels of exchange rates, the dollar is stronger than what one might perceive on the basis of conventional divisia indices.

Readers of this blog will know that I have spent a lot of time trying to model in a partial equilibrium (some would say old-fashioned) approach the determinants of the US trade balance (see here). I can usually obtain sensible estimates of price and income elasticities using multivariate cointegration techniques, but usually have to incorporate some deterministic trends (see these papers: [1], [2], [3] [pdf]). From a statistical standpoint, these trends make sense. From an economic perspective, I am always queasy about having these trends explain a lot of the time series behavior of the variables of interest. The Thomas-Marquez-Fahle index eliminates some of that reliance on “trends”, even in the “ocular-regression” context. To see this point, consider the figure below. I plot the net export (ex. oil) to GDP ratio in blue. I’ve also inverted the log real exchange indices so that we now have exchange rates instead of currency values plotted, and lagged them 8 quarters to account for lagged adjustment.

What’s apparent is that the Thomas-Marquez-Fahle series tracks the trade balance much better. The authors confirm this point for exports: 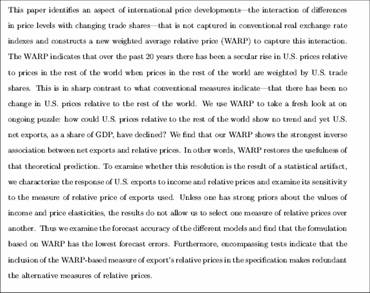 This suggests to me (this is not asserted in the Thomas-Marquez-Fahle paper) that there is still substantial dollar adjustment required in order to get the net exports ex-oil to GDP ratio to something around 1% of GDP. This conclusion, by the way, is not inconsistent with the view forwarded by Brad Setser that the dollar has declined by a sufficient amount to induce some adjustment. It’s also a view consistent with why we haven’t seen more global rebalancing. It’s definitely not consistent with this view, and measures of central tendency cited in this post. This suggests to me that in order to reconcile the two perceptions, some low-probability event (at least as perceived by the markets) has to happen. Some examples are here.
[minor corrections/deletions in notes to Figure 2, 5pm Pacific, 12/12]

11 thoughts on “Is the Dollar Near the Bottom (II)”