The Administration’s forecast calls for real GDP to continue to fall in the first half of 2009, with the major declines projected to be concentrated in the fourth quarter of 2008 and the first quarter of 2009. An active monetary policy and Treasury’s injection of assets into financial institutions are expected to ease financial stress and to lead to a rebound in the interest-sensitive sectors of the economy in the second half of 2009.

Part of the Bush CEA’s optimism (relative to other forecasts [1], [2]) is based upon this correlation: 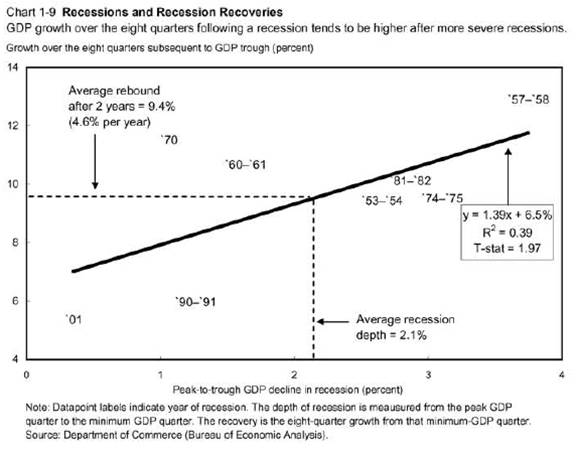 My one observation is that the last two recession observations (’90-’91; ’01) are substantially below the regression line. One aspect of the 1990-91 recession that seems particularly relevant is the fact that it was accompanied by a capital crunch — that is a crisis that required injections of capital into the banks. In that sense, that recession was conjoined with a financial crisis and a housing crash (see IMF analysis discussed here). So, while I’m hopeful, I’m not too sanguine [4].