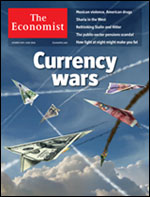 With the cover page of the Economist [1] [2] worrying about currency wars, and various analysts arguing whether the US can or cannot win such a “war” (see Naked Capitalism for a discussion), I thought it would be useful to see where we now stand, in terms of “competitiveness”, as understood by open economy macroeconomists.

Open economy macroeconomists typically defined competitiveness as the relative price of traded goods. Below, I’ve plotted the trade weighted value of the dollar against a broad basket of currencies in nominal (blue) and real (CPI deflated) terms (red), as measured by the Federal Reserve. Notice that by this definition, “up” is an appreciation.

Figure 1: Nominal trade weighted value of the US dollar against a broad basket of currencies (blue), and real, CPI-deflated (red). Blue square is for 10/15 observation. An appreciation is denoted by an upward movement. Source: Federal Reserve Board.


What is interesting is that the dollar is weakening against other currencies, including the East Asian currencies. (For calculations regarding the Chinese yuan, see here.) Much of the depreciation has occurred as talk of QE2 has mounted.

The CPI-deflated value of the dollar has also depreciated. It’s important to note that, as I discussed here [paper], the CPI might not be the most appropriate deflator, since it includes many nontradable goods and services; and in fact there is a theory which states that real exchange rates should appreciate over time as productivity rises relative to partner countries (see [3] [4]).

One might be more interested in the cost of produced goods, as opposed to price (see for instance this paper by Golub, as well as this paper). This suggests the use of unit labor cost deflated real exchange rates. In Figure 2, I plot the ULC deflated value of the dollar.


Note because it is difficult to obtain ULCs for many emerging market economies on a timely basis, the ULC-deflated index pertains to a narrow basket of currencies, excluding China. This limits the usefulness of the measure, but one can still see how US productivity and wage trends affect the index. Arguments that high labor costs have made US goods uncompetitive (at least relative to a couple years ago) seem unjustified. (One caveat: as pointed out in this post, divisia indices potentially miss out on big level effects.

I find it interesting that some people have argued that a depreciating currency will not have a large impact on US output. I tend to agree, but arguments based on low price elasticities of trade (as in this post), do not seem entirely convincing to me. In the past, I would have agreed that US trade (particularly import) elasticities with respect to the real exchange rate are low [5]. However, my more recent estimates, based on data going through 2010Q2, indicate the long run elasticity of exports is close to unity, suggesting scope for substantial impact from dollar depreciation [6] [paper].

Just because the US dollar has depreciated does not mean that we can necessarily “win” the currency wars. In fact, I’m not sure what “winning” means in this context. In particular, Barry Eichengreen notes that a far better way to stimulate economies would be in a coordinated fashion, with transparent declarations of what quantitative easing means and goals would be.

On the other hand, I do think the US can influence the US dollar real exchange rate even if other countries (including China) are less than willing to cooperate. Paul Krugman has observed that quantitative easing that involves further purchases of short term Treasury debt will have limited impact on exchange rates given the high substitutability of money and (short term) bonds at the zero interest bound. I have two observations: (i) if long term bonds are purchased, then quantitative easing/credit easing should have an impact, given the lower degree of substitutability. (ii) while no countries are on a classical gold standard right now (in contrast to the interwar years), if quantitative easing leads to more inflation than would otherwise occur, that would induce more rapid depreciation of the dollar. Of course, (ii) incorporates a big “if”.

The Fed has another tool, which it is unlikely to fully utilize, that could have a big impact on the dollar — namely changing the interest rate paid on reserves. That rate influences the money multiplier that links money base to the money supply. And I think few doubt that an expansion of the money supply has an impact on the exchange rate.

A cooperative solution to monetary policy (and macro policy coordination) [7] is clearly more desirable than a noncooperative solution. But in the absence of that, there are actions that can be undertaken to improve the US situation.

The quantitative impact of QE2 depends on the magnitude of the purchases. Chris Neely’s results, discussed in this post, is summarized thusly in a recent Deutsche Bank Global Economic Prospects:

…the St Louis Fed has calculated that a
total of $1.725trn asset purchases resulted in an
accumulated decline in the dollar of 6.5%. On this basis,
a $1 trn purchase of Treasuries might therefore cause the
dollar to decline by 4%. …(Peter Hooper and Torsten Slok, September 29, 2010)

The Neely results are contained in this paper.