In our book Lost Decades, Jeffry Frieden and I tried to be as comprehensive as possible in documenting the history we described, the analytical results we reported, and the data we used. We had intended to rely to a greater degree on graphical depictions, but for a variety of reasons, not all the proposed graphs made it in. Hence, we present the graphs that didn’t make it into Lost Decades. (And, by virtue of the just-in-time nature of the web, updated!). The graphs are organized by chapters:

Chapter 1: Welcome to Argentina: How America Borrowed Its Way into a Debt Crisis

The magnitude of the fiscal and external deficits the United States experienced over the last decade are displayed in Add-Figure 1.1. (The structural budget balance as of October 2010 is depicted here).

The increase in Federal debt held by the public was to a great degree manifested in greater holdings by foreigners. Add-Figures 1.2 and 1.3 present long term Treasury (about 42% of total short- and long-term debt held by the public) and long-term Treasury and Agency debt holdings by foreigners, as of mid-2008, on the eve of the financial collapse. 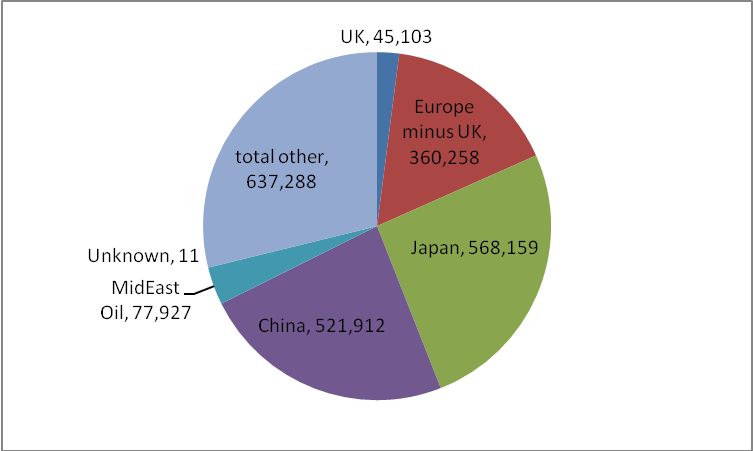 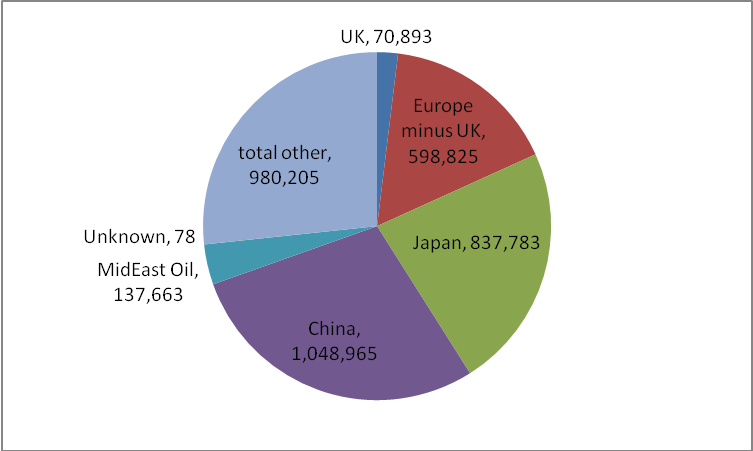 Half of the holdings of US Treasury securities and Treasury and Agency securities were held by China and Japan. While the Chinese and Japanese holdings were about the same size, China’s had caught up quickly, over the preceding five years.

As the slow recovery from the first G.W. Bush recession continued, the Fed dropped the policy rate to record lows. With positive inflation, the real interest rate (with expected inflation proxied by the previous year’s CPI inflation) dropped to record lows.

Before describing the collapse, we needed to illustrate the boom in lending associated with mortgage backed derivatives. Add-Figure 4.1 shows the boom.


The boom in the shadow financial system, as measured by asset backed commercial paper, started taking off in 2004, and peaked in 2007. The collapse in this market began over a year before the Lehman bankruptcy.

It’s important to remember there were “deniers” in the crisis area, just like in global climate change. The sunny assessment by Chari et al. (2008) (Minneapolis Fed WP 666), which pointed to the increase in bank lending as an indication that the crisis was not severe, is a memorable case in point. Credit spreads were signaling something else.


The breakdown in global financial markets is highlighted by the TED spread, the gap between risky and riskless rates at the three month maturity. Clearly, financial markets were in crisis in the aftermath of Lehman. The reported TED spread likely understates the risk premium to the extent that there were almost no transactions at the time of the peak in the spread.

The response to the crisis occurred along several dimensions (fiscal, monetary, financial), and across countries. Add-Figures 5.1 and 5.2 highlight the fact that the fiscal [discretionary] stimulus in the US was rather modest, in relative terms.


The decline in growth rates in mid-2010 was in some sense not so surprising. The stimulus was not very large as a share of GDP (and not particularly large relative to the output drop, as we now know, with revised GDP data [4]), and reduction in the growth rate of government spending and transfers was going to exert a drag on GDP in 2010 and 2011, even if GDP was higher than it otherwise would be [5].


Highlighting the fact that the US stimulus was not particularly large in comparison to what other countries did. The Chinese fiscal stimulus was a percentage point larger (and that figure did not include quasi-fiscal stimulus delivered through the banking system).

One of the points we make in the book is that the concentration in income growth, and stagnation in median incomes, over the past decades led in part to policies that led to asset booms. With the deflation of these booms, the higher income groups still reap a very large share of income, as shown in this post. Add-Figure 6.1 shows how hourly wages have evolved.


By this measure, income inequality has deteriorated over the past forty years, but the deterioration has accelerated in the past decade and a half. Note the near constancy of real wages at the 20th and 50th percentiles.

It is not clear to me that reducing the tax rates on the highest income earners, reducing regulation, and cutting unemployment insurance and SNAP will address this issue.