Actually, not even the footnotes — just the text accompanying data releases (in this case it’s the second paragraph, in a box, of the release). Although, I must admit, this long rant by FoxForum contributing writer Noel Sheppard just made me laugh and laugh and laugh, thus making an otherwise bleak Monday brighter. From “CNN’s Crowley Does Two Segments on Jobs Numbers Without Mentioning Plummeting Participation Rate”

When I saw CNN’s Candy Crowley on Sunday tease an upcoming State of the Union segment saying she’d be discussing Friday’s unemployment report after a commercial break, I was hoping to see a complete analysis of the data provided by the Bureau of Labor Statistics.

Much to my shock and dismay, although she and her guests discussed the economy and the jobs market for eight minutes over two segments, there was not one single word said about the declining participation rate or the record 1.2 million one month increase in the number of people not in the labor force (video follows with transcript and commentary):

As discussed by Jim (and by CR), this misinterpetation arises because of a lack of understanding of how the numbers are calculated. In my view, these sorts of mistakes are common among those looking for the cheap thrills of exposing non-existent data conspiracies. If only Mr. Sheppard read Table C (page 7)of the release!

Of course, this is not the first (or likely to be the last) time such mistakes have occurred. See Brad DeLong’s critique of Professor Robert Barro’s Business Week column of January 2004.


By the way, doing the calculation Jim suggests indicates the “not in the labor force” number fell by 0.075 million… 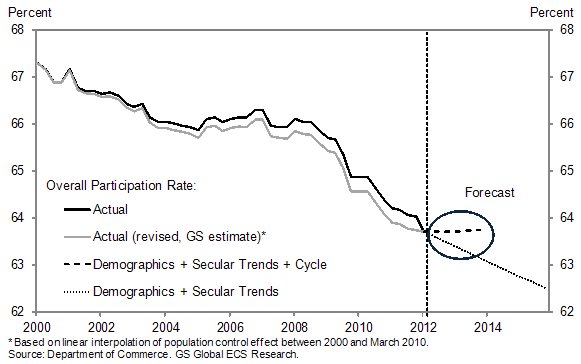 To gauge the outlook for the participation rate, we update a model we developed last year. (For details see Sven Jari Stehn, ” Labor Force Participation: Only a Small Rebound in Sight,” US Economics Analyst, February 11, 2011.)

…our model suggests that the participation rate will remain broadly flat at 63.7% through the end of 2013 (see dashed line in the chart above).