Or more precisely, Ryanomics as interpreted by the Heritage Foundation/Center for Data Analysis.

In last night’s debate, Mitt Romney repeated the idea that he could pay for much or all of the 20 percent rate reduction and other tax cuts in his tax plan by capping itemized deductions at $25,000. He had previously suggested a $17,000 cap in an interview and, in the first debate, $25,000 or $50,000 caps—and possibly phasing deductions out entirely for high-income taxpayers. Capping deductions would raise revenue in a highly progressive way but how much revenue and how progressive depend on the cap.

Eliminating all itemized deductions would yield about $2 trillion of additional revenue over ten years if we cut all rates by 20 percent and eliminate the AMT. Capping deductions would generate less additional revenue, and the higher the cap, the smaller the gain. Limiting deductions to $17,000 would increase revenues by nearly $1.7 trillion over ten years. A $25,000 cap would yield roughly $1.3 trillion and a $50,000 cap would raise only about $760 billion.

Suggesting limits on deductions was Governor Romney’s first public statement about how he might offset the revenue lost by cutting tax rates. Without more specifics, we can’t say how much revenue such limits would actually raise. But these new estimates suggest that Romney will need to do much more than capping itemized deductions to pay for the roughly $5 trillion in rate cuts and other tax benefits he has proposed. [emphasis added — MDC]

The Tax Policy Center provides an interactive webpage where you can pick your option. The outcomes are summarized in the Table below:

Now, before one jumps on the TPC as a biased institution, it should be remembered that Governor Romney was for TPC before he (or at least his advisers) were against TPC [1].

Of course, since Governor Romney has a fairly malleable set of policy positions, he might revert to earlier positions on eliminating some subset of deductions, and drop the deductions cap. The Council of Foreign Relations Geoeconomics Center has produced an interested graph which shows the value of various tax expenditures (deductions), indicating in red which ones Governor Romney has exempted. This is shown in the figure below. 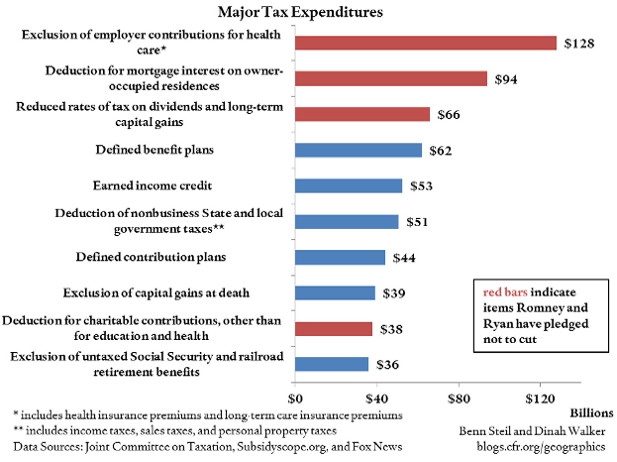 In last week’s vice-presidential debate, Republican Paul Ryan defended the fiscal prudence of lowering top marginal income tax rates by arguing that it would be accompanied by “forego[ing] about $1.1 trillion in loopholes and deductions .. deny[ing] those loopholes and deductions to higher-income taxpayers.” The $1.1 trillion he refers to is actually an amalgam of specific “tax expenditures” – benefits distributed through reductions in taxes otherwise owed – identified by the Joint Committee on Taxation. …

The red bars indicate items that Romney and Ryan had previously promised not to touch: exclusion of employer contributions for health care, deductions for mortgage interest, reduced tax rates on dividends and long-term capital gains, and deductions for charitable giving. These four items constitute a massive 30% of the $1.1 trillion. Therefore the Ryan pledge to cut loopholes and deductions cannot, mathematically, be worth more than $770 billion.

And note some of the other big-ticket “loopholes and deductions” on the list. Social security and other retirement income constitute three of the top ten items, together making up 13% of the total, and the earned income credit, which benefits the poor, represents another 5% of the total. Would Romney and Ryan eliminate those deductions? We’ll speculate here: no. A quick skim of the remainder shows that few of these items constitute “loopholes” in the public’s mind – they are items few imagine could or should be taxed.

On to economics. As I have noted before [2] [3], the circle can be squared if one is sufficiently imaginative. And I don’t mean almost-reasonable elasticities [4] — which won’t do –, I mean truly imaginative. And the bounds of imagination were pushed to the interstellar realm when the Heritage/Center for Data Analysis “analyzed” the Ryan plan back in April 2011. Then, it turned out that the Ryan plan could hit the employment, output and revenue targets enumerated if sufficiently high labor elasticities are assumed, along with capital elasticities with respect to user costs of capital about 10 times the usually assumed values. I reverse-engineered these elasticities based upon the (now “disappeared”) Heritage/CDA analysis of the Ryan plan, discussed in gruesome detail here.

Note that the shortfalls noted above pertain only to the tax side; there are additional defense related commitments that make the shortfall (conditional on the promised balanced budget) even larger. Once again, I am confident that with sufficient imagination, Governor Romney’s advisers can square the circle on that count as well.

In other words, the Governor should just dispense with trying to appeal to reality, and make up the economic numbers to make the tax numbers work, just as Representative Ryan/Heritage have.

63 thoughts on “To Make the Math Add Up, Romney Needs Ryanomics”