Paranoia and Conspiracy Theory in a Time of Excel

I debated whether to discuss the hysterical assertions of manipulation surrounding the BLS’s September employment situation release, since it had been so well covered. Rogow/WSJ RTE Rampell/NYT Economix [Thoma/EV] [Thoma/Fiscal Times] [Krugman] [Mishel/EPI] [Johnston/MinnPost] But it is so depressing to see the descent of a large portion of the commentariat into delusion and/or mendacity that I thought I would show exactly how pathetic the assertions of data manipulation are. Exhibit 1 is Jack Welch’s tweet, the subsequent flailing attempt to defend his unsubstantiated assertion on Anderson Cooper’s show, and finally on the Op-Ed page of the WSJ (perfectly appropriate, I must say). Welch himself describes the controversy:

… In my first tweet, sent the night before the unemployment figure was released, I wrote: “Tomorrow unemployment numbers for Sept. with all the assumptions Labor Department can make..wonder about participation assumption??” The response was a big yawn.
My next tweet, on Oct. 5, the one that got the attention of the Obama campaign and its supporters, read: “Unbelievable jobs numbers..these Chicago guys will do anything..can’t debate so change numbers.”
As I said that same evening in an interview on CNN, if I could write that tweet again, I would have added a few question marks at the end, as with my earlier tweet, to make it clear I was raising a question.

I’ll let readers decide whether Mr. Welch is trying to have it both ways; inspecting the video of Mr. Welch on Anderson Cooper would be particularly instructive. Representative Allen West agrees with Jack Welch:

I agree with former GE CEO Jack Welch, Chicago style politics is at work here. Somehow by manipulation of data we are all of a sudden below 8 percent unemployment, a month from the Presidential election. This is Orwellian to say the least and representative of Saul Alinsky tactics from the book “Rules for Radicals”- a must read for all who want to know how the left strategize.

Since we are seeing elected officials considering hearings on the validity of these numbers [1], it seems useful to re-examine the question of whether these numbers are truly unbelievable. Let’s look at the actual numbers that are used to calculate the unemployment rate. For the mathematically challenged, a “rate” is the ratio of two numbers — the unemployed (let’s call that U ≡ L – N, where L is the labor force, and N, which is employment), and the the labor force (L).

One can then ask if the components of the unemployment rate behaved anomalously in 2012M09. Most trained economists and statisticians have refused to say they are out of the bounds of plausibility, but let me verify this explicitly by providing some time series plots.

First, look at civilian employment (N) and civilian labor force (L) over the past thirteen years:

Eyeballing the two series, I would be hard pressed to see movements in September as being out of historical precedent. (Note that there is a large discrete break at the beginning of the 2000’s — and in previous decades, not shown in the graph — due to the application of population controls; analysts ignore these statistical breaks at their peril, e.g. here).

In order to formalize the argument that the movements in the two series were not out of the ordinary, I examine the log first differences of employment and labor force over the entire span of available data (1948M01-2012M09). I plot the two series and the associated plus/minus two standard error bands in Figures 2 and 3, respectively.

The relevant question is whether in either figure, the blue line moves close to the gray lines, or spills over the orange line. I do not see this occurring in either figure.

What about the unemployment rate series? Here is the analogous figure.

Here too, it seems as if the change is not out of the ordinary in terms of the historical record. In fact, the anomalous downward movements were in 2010M12; and in 1983M07. Yet I do not recall hearing any concerns about anomalous movements at those times (I might be wrong about the 1983 observation, which was a long time ago).

It constantly amazes me that in an era of widely-available spreadsheet programs that can run regressions, and when ostensibly our policymakers and analysts are as educated as they ever have been, that crazy and easily-disprovable assertions of conspiracy have been leveled. It suggests to me that for some, destruction of the trust we have in a professional civil service is considered acceptable in the quest to gain political advantage.

Finally, it is of use to consider how different indicators of employment are moving. Figure 5 illustrates the fact that the employment series behavior is not anomalous.

Note that all indicators are trending up, and in some respects the civilian employment series is catching up with the others. Indeed the September 2012 movement seems large, but it is well known (at least by those who understand statistical sampling) that the volatility in this series is higher than the others exactly because the household survey sample is relatively small.

Hatzius also points out that using data on inflows and outflows from employment and unemployment in a model based on work by Shimer yields estimates of unemployment consistent with the downturn in the official unemployment rate. 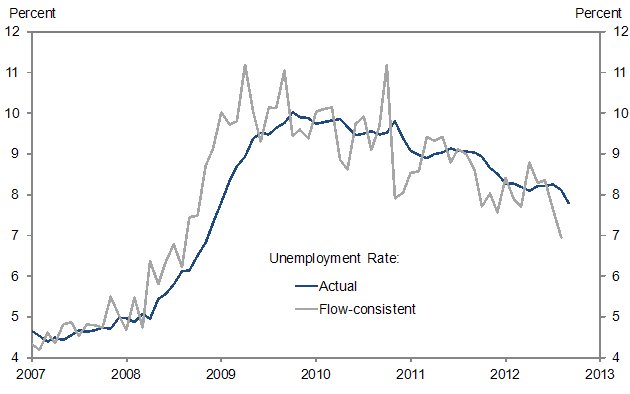 Jack Welch is right on one point: we could do a better job of tracking the economy. Yet I have yet to hear one critic of these latest figures propose the one thing that would help fix the problem: provide more resources to the statistical agencies. (Of course, Republicans of late have been targeting statistical data gathering by the Federal government for budget cuts. [2] [3] The ironies abound.)

Other examples of craziness: [Examiner], [Red State] [Daily Caller] [Reason] Caution: reading any of these links will likely kill some brain cells. Best line from the Reason.com article:

Welch still doesn’t present any evidence of fraud. But the administration’s dedication to accuracy on items that are more important than jobless numbers seems notably less fervent than its commitment to protecting America’s lady parts and its wildly popular children’s television characters from the mortal threat posed by Stacey Dash. Good on Jack Welch for keeping this question alive.

So…since we cannot disprove lack of interference, we should believe interference has occurred…especially if one can’t understand statistics.