One of the puzzles of the post-crisis period is why investment has been so slow. Some would want to resort to stories of uncertainty. Is there something to this idea? Figure 1 depicts the gross investment to net capital stock.

Our econometric analysis [of data over the 1991-2012 period] leads us to draw the following conclusions about each class of model:

First, the accelerator model generally fits well. … The model also substantially overpredicts investment during the last couple of years because it implies that the lagged effect of the sharpest downturn phase of the recession should have passed by now.
Second, Tobin’s Q model … is considerably noisier and overpredicts investment during the recovery from the Great Recession much more severely than the other models.
Finally, combining the accelerator model with a measure of credit availability captures investment dynamics reasonably well. … Our analysis suggests that an improved version of the standard accelerator model that accounts for the availability of credit goes a long way toward explaining recent investment patterns. 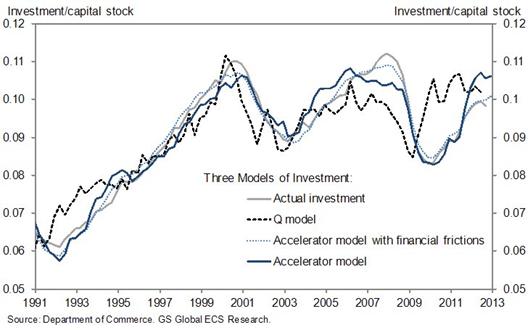 Two of these models (as well others) are described in this post. Briefly, the accelerator links the investment/capital stock data to the change in GDP, the Q model implies the investment ratio is linked to the ratio of market valuation to book value, adjusted for tax provisions, and the financial frictions model in the GS formulation augments the accelerator with a proxy measure for the effect of frictions (namely loan officer report on lending conditions).

I find it of interest that policy uncertainty, which some analysts have pointed to as putting a drag on economic activity (including investment), does not make an appearance in this discussion.

To examine this issue a little more closely, I undertake my own analysis. I run regressions over the 1990Q4-2012Q3 period, using error correction models based on these specifications:

Where y is log real GDP, z is the loan officer lending conditions index, and Φ is a measure of uncertainty; the regression output is here. (Note that there are other ways to incorporate financial frictions [1]; [2] suggests cash flow would be relevant).

I find that for the first two specifications, the change in the log investment to capital ratio responds to the lagged ratio, and that the growth rate of GDP is a statistically important determinant of the ratio. Moreover, adding in the lending conditions produces a coefficient of right sign (investment falls when lending conditions tighten). More importantly, the proportion of variance rises from 0.55 to 0.64.

This doesn’t mean that uncertainty doesn’t matter for the long horizon. It could be that the loan officers respond to uncertainty by tightening conditions. Alternatively, policy uncertainty could be mismeasured. Or a different specification and/or methodology would yield different results (as in Baker, Bloom and Davis) Or finally, economic uncertainty (rather than just policy) could matter more –- including uncertainty about demand condtions (see discussion in this post). However, the fact that policy uncertainty shows up in the first difference is suggestive that the effects are at the short horizon, rather than the long. Hopefully that will soon be resolved, so that investment resumes growth. [3]

So in the (statistical) long run, tightening of lending standards and slow GDP growth (attributable to fiscal drag) are important determinants of low nonresidential fixed investment. It would be hard to fix the former (since tightening might be rational from an individual bank perspective, and is an outcome consistent with deleveraging after a major balance sheet crisis [4]), but we know how to address the latter: maintain aggregate demand.

15 thoughts on “The Slow Growth in Investment”