In several weeks, absent action by policymakers, the Federal government will begin implementing $85 billion worth of across-the-board cuts during FY2013 (i.e., in the months before October). [0]

According to one narrative, each dollar of spending previously devoted to patrolling the South China Sea and monitoring tornadoes and winter storms will be released to private spending, so that there is no impact on output. For the rest of us, output will likely decline relative to what would have otherwise would have occurred. How much? Given that interest rates are near zero (the “zero lower bound” or ZLB), I suspect a lot.

From Reichling and Whalen (2012), an assessment of fiscal multipliers under special circumstances, arguably prevailing at the moment:

CBO’s analyses generally use a range of values for the demand multiplier to reflect the uncertainty about its size. In addition, the range of estimates used by CBO varies with the degree of resource utilization in the economy and the response of monetary policy during the periods when the changes in fiscal policies occur. When actual output is well below potential output and the Federal Reserve does not act to offset the effects of changes in fiscal policies, CBO’s demand multiplier ranges from 0.5 to 2.5 over four quarters, starting the quarter in which a direct effect occurs in response to changes in policies, with no further effects on output in the short term.

Figure 1 presents a plot of multipliers for government spending on goods and services:

Figure 1: Cumulative fiscal multipliers for spending on goods and services, high (blue) and low (green) values when monetary policy responds as in normal times; and high (red) and low (purple) values when interest rates are near zero (the “zero lower bound”), for spending changes beginning in 2013Q1. Source: Reichling and Whalen (2012) additional data.


Pretty clearly, we are in a liquidity trap. Nominal rates are unlikely to budge in the face of plausible government spending changes. Consequently, taken together, spending cuts of $85 billion for this fiscal year will result in something like $200 billion reduction by four quarters after spending is implemented (I’m assuming the bulk of the cuts are reductions in spending on goods and services). Going forward, assuming $110 billion cuts year after year per the Budget Control Act, GDP will be reduced by over $250 billion per year relative to baseline.

While these numbers don’t sound incredibly large against a backdrop of a $15 trillion economy, it’s important to recall that government spending on goods and services is already slated to continue to decline over the next few years (see Krugman for the retrospective and Weisenthal/BI quoting Goldman Sachs for the prospective views).

The preceding multiplier calculations assume there are no disruptions associated with spending reductions. At this point, it is important to recall that the cuts are to be implemented in a remarkably blunt fashion. From Plumer/Wonkblog: “The key feature of the cuts is that they would affect all agencies and programs equally — federal officials would not be able to pick and choose which programs get protected and which get the ax.” And from Beutler/TPM:

“If we go past this date, there’s no way to implement the sequester without significant furloughs of hundreds of thousands of federal employees,” said [OMB Controller of Office of Federal Financial Management Danny] Werfel. That’s in large part because there’s no ways for departments and agencies to move money around to protect top-tier services and programs.


“What happens is, OMB, we take this amount, this $85 billion that we have to cut and apply it to every account in government,” he added. “Every account has to be cut by a certain percentage. It’s not like the agencies can move money amongst accounts. But it’s even worse than that; even at the sub-account, there’s something called Program Project and Activity which exists within each account. And the way the sequester law is written is that even underneath the account — even at the Program Project and Activity — they all need to be cut at that same percentage.”

“So for example, FAA, they have to cut resources in a way that’s going to impact the air-traffic control workforce,” Werfel added.

Half of the spending cuts apply to defense. This is what defense spending would look like as a consequence of BCA implementation. 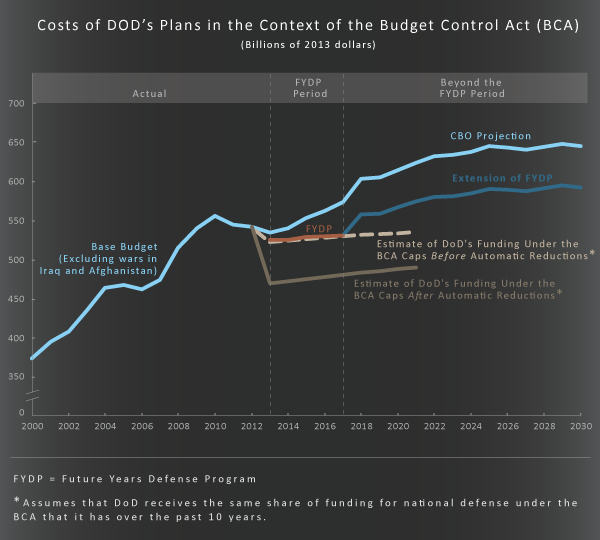 21 thoughts on “Sequester in the Time of ZLB”