Today, we are fortunate to have a guest contribution by Ambrogio Cesa-Bianchi and Alessandro Rebucci. It is based upon Does Easing Monetary Policy Increase Financial Instability?. The views expressed in this column are the authors’ and not necessarily those of the institutions with which they are affiliated.

From a historical perspective, monetary policy worldwide has been systematically accommodative for most of the past decade. From the “BIS Quarterly Review,” September 2012:

“Policy rates have on aggregate been below the levels implied by the Taylor rule for most of the period since the early 2000s in both advanced and emerging market economies.”

According to many economists, such loose monetary policy stance played a central role in exacerbating the severity of the global financial crisis of 2007-09. From “How Government Created the Financial Crisis,” by John Taylor, WSJ, February 9, 2009:

“Monetary excesses were the main cause of the boom. The Fed held its target interest rate, especially in 2003-2005, well below known monetary guidelines that say what good policy should be based on historical experience.”

In a recent paper (Cesa-Bianchi and Rebucci, 2013), we develop a simple theoretical model that speaks to the interaction between macroeconomic and financial stability. Our results show that Taylor’s argument—i.e., that higher interest rates would have reduced both the probability and the severity of the crisis—is valid only with the auxiliary assumption that the policy authority had just one instrument at its disposal (the policy rate) to address both macroeconomic and financial distortions in the economy. However, in the United States, institutional responsibility for financial stability is shared among a multiplicity of agencies (i.e., Office of the Comptroller of the Currency, Federal Reserve, Office of Thrift Supervision, Federal Deposit Insurance Corporation). What did other regulators of the U.S. financial system do to contain the housing boom and mortgage lending excesses between 2002 and 2007?
Figure 1 provides a picture of the evolution of the policy rate, the U.S. mortgage market, and regulatory policies on the mortgage market from 2000 to 2007. Broadly speaking, this evidence shows that, after the Fed started to tighten its monetary policy stance and the prime segment of the mortgage marketed promptly turned around, the subprime segment of the mortgage market continued to boom, with increased perceived risk of loans portfolios and declining lending standards. Despite this evidence, the first regulatory action to rein in those financial excesses was undertaken only in late 2006 (the vertical line labeled FDIC 1), after almost two years of steady increases in the federal funds rate.
In summary, in the context of our model and according to this evidence, regulatory rather than monetary policy failures are largely to blame for the occurrence and the severity of the Great Recession. Only by assuming that the Fed was the sole institutional guardian of financial stability, or at least the main one, is it possible to contend that monetary policy is to blame for the 2007-09 financial crisis and the ensuing Great Recession. 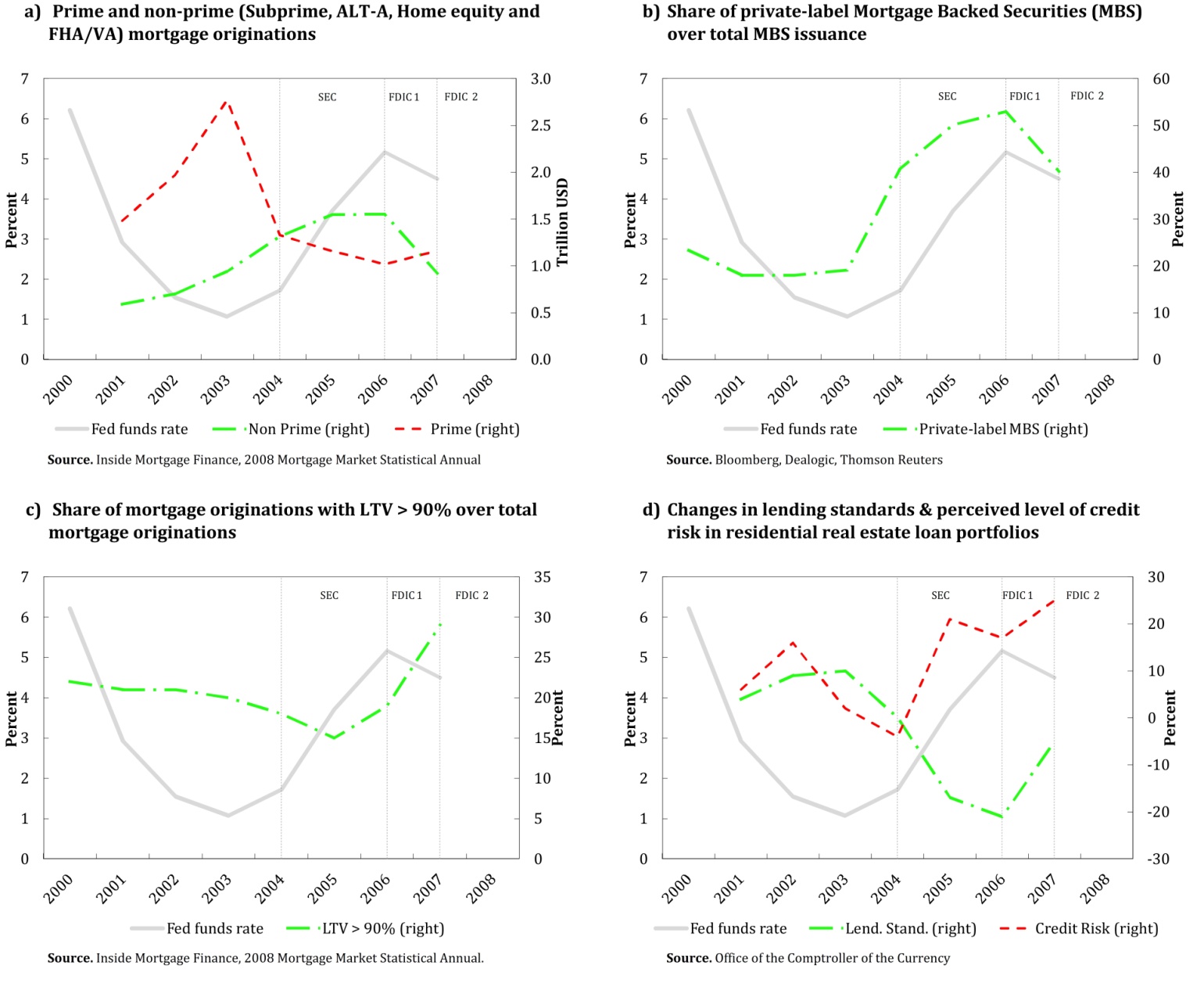 Are we heading for another financial crisis? The Fed is currently fighting an unemployment scare with extraordinary quantitative measures and a commitment to keep interest rates low for an extended period of time. Indeed, interest rates today are even lower than in the 2002-2005 period and have been low for a much longer period of time. However, and differently from the pre-crisis period, an important regulatory action has been undertaken in 2008 in order to address the subprime mortgage crisis (The Housing and Economic Recovery Act). So is monetary policy fuelling the next financial crisis, as some fear?
Figure 2 provides a picture of the behavior of monetary policy and the mortgage market as in Figure 1, but for the period after the financial crisis, from 2006 to 2012. Mortgage originations have steadily decreased since 2006 (Panel a). Moreover, and differently from the 2003-06 period, the share of private-label Mortgage Backed Securities (MBS) over total MBS issuance has decreased to almost zero (Panel b). The share of high-LTV ratio mortgages is slowly picking up from the very low levels achieved in 2009 (Panel c), but it is still well below the levels of 2007. Finally, the risk perceived by banks involved in residential lending is decreasing, while lending standards are easing from overly tight levels to more normal levels (Panel d). This evidence therefore shows that, despite historically low interest rates, current data are not sending alarming red signals regarding these markets. 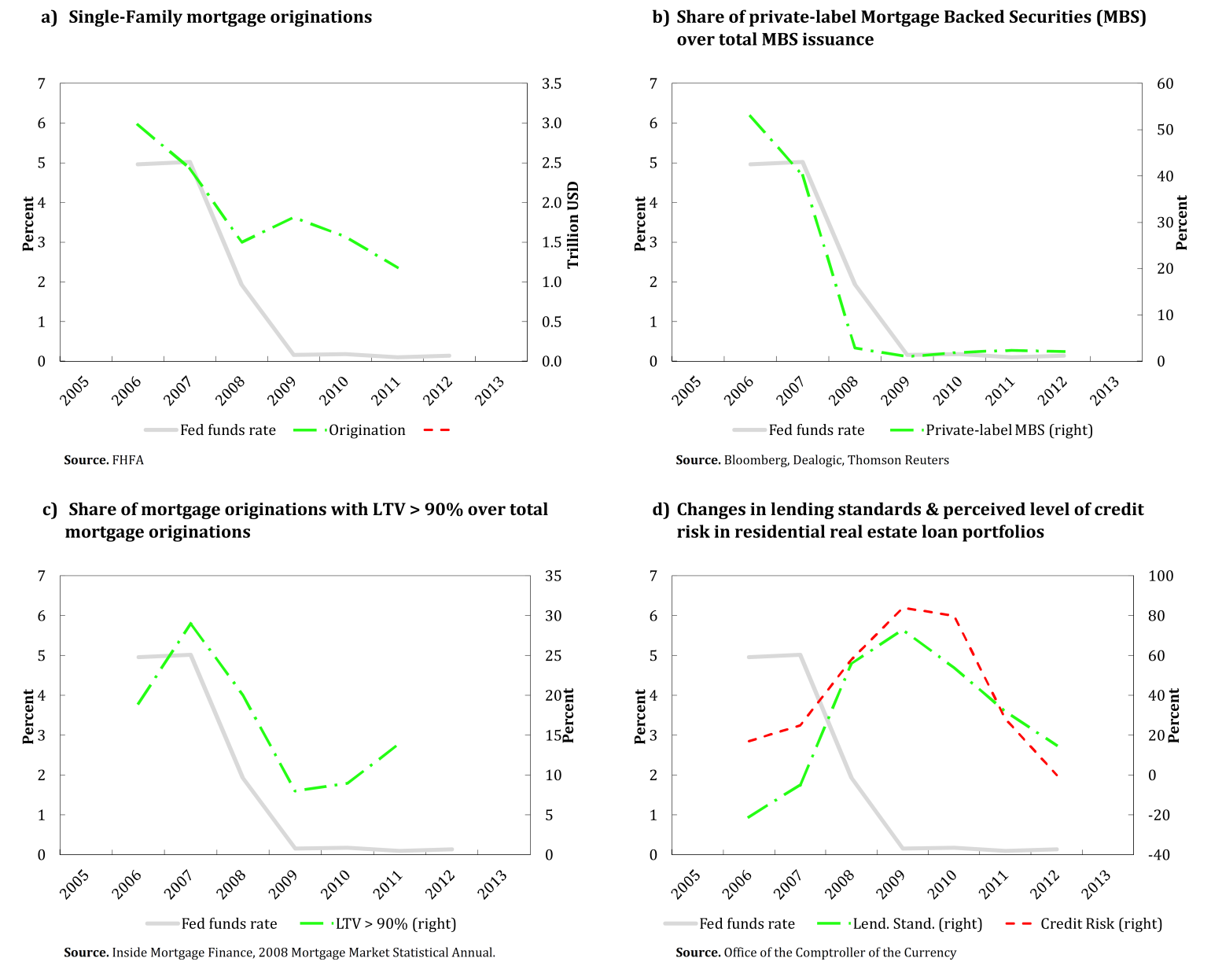 Of course, the place where the last financial crisis occurred is a very poor predictor of where the next crisis will occur: financial imbalances might be growing in other parts of the U.S. economy (e.g., commercial real estate, corporate bonds, private equity) or outside the U.S. via exchange rate misalignments and excessive movements in commodities. Nonetheless, the lesson learned from the last crisis is one taught by many crises before: policymakers generally need as many instruments as objectives. It is not fair to blame the Great Recession only on the Fed’s monetary policy stance.

37 thoughts on “Guest Contribution: “Is the Federal Reserve Breeding the Next Financial Crisis?””