Chairman Bernanke says it all

From a speech today by Fed Chair Ben Bernanke, at the LSE:

…modern research on the Depression, beginning with the seminal 1985 paper by Barry Eichengreen and Jeffrey Sachs, has changed our view of the effects of the abandonment of the gold standard.6 Although it is true that leaving the gold standard and the resulting currency depreciation conferred a temporary competitive advantage in some cases, modern research shows that the primary benefit of leaving gold was that it freed countries to use appropriately expansionary monetary policies. By 1935 or 1936, when essentially all major countries had left the gold standard and exchange rates were market-determined, the net trade effects of the changes in currency values were certainly small. Yet the global economy as a whole was much stronger than it had been in 1931. The reason was that, in shedding the strait jacket of the gold standard, each country became free to use monetary policy in a way that was more commensurate with achieving full employment at home. Moreover, and critically, countries also benefited from stronger growth in trading partners that purchased their exports. In sharp contrast to the tariff wars, monetary reflation in the 1930s was a positive-sum exercise, whose benefits came mainly from higher domestic demand in all countries, not from trade diversion arising from changes in exchange rates.
The lessons for the present are clear. Today most advanced industrial economies remain, to varying extents, in the grip of slow recoveries from the Great Recession. With inflation generally contained, central banks in these countries are providing accommodative monetary policies to support growth. Do these policies constitute competitive devaluations? To the contrary, because monetary policy is accommodative in the great majority of advanced industrial economies, one would not expect large and persistent changes in the configuration of exchange rates among these countries. The benefits of monetary accommodation in the advanced economies are not created in any significant way by changes in exchange rates; they come instead from the support for domestic aggregate demand in each country or region. Moreover, because stronger growth in each economy confers beneficial spillovers to trading partners, these policies are not “beggar-thy-neighbor” but rather are positive-sum, “enrich-thy-neighbor” actions. 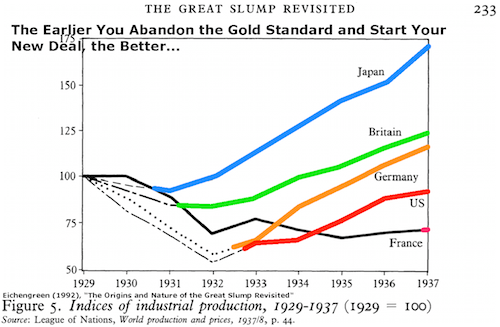 I agree with Bernanke’s view that these unconventional monetary policy actions are likely to be positive sum, although I might place a little more emphasis on expenditure switching effects. In my view, even if central banks are happy to see their currencies depreciate, this might end up leading to a positive outcome. This is despite the fact that the net outcome will be more or less unchanged exchange rates (against at least a set of countries) [1]. Reflation would imply a higher price level, and as I have pointed out (with Jeffry Frieden, and with Joshua Aizenman), this will have a salutary effect on economies currently experiencing persistent and large output gaps — namely a lessening of real debt loads, and a relaxation of credit constraints. In fact, expectations of inflation are now heightened slightly (i.e., although not to Paul Ryan levels!). From Deutsche Bank:

As I’ve noted before, we don’t need an acceleration of inflation in all countries. Exactly because the world economy has been experiencing a two speed recovery (fast in emerging markets, slow or none in advanced), the benefits of inflation vary by region. So more rapid inflation is necessary in the US, Euro area, and particularly Japan. Moreover, my point about exchange rates does not apply to all countries: for the same reasons, we would want emerging market economy rates to appreciate, while those of the advanced economies to depreciation. To some extent, this is happening (although the Euro area rate is going the wrong direction right now).

Japan’s exchange rate has fallen substantially, as discussed here. The UK’s has decreased recently, which is good, given the complete and utter absence of the promised expansionary fiscal contraction effect. In contrast, China’s currency has gained substantial value. Nonetheless, much more adjustment of exchange rates is necessary, primarily against the emerging market economy currencies.

As indicated at the beginning, I can’t improve on Bernanke’s conclusion to his speech:

In sum, the advanced industrial economies are currently pursuing appropriately expansionary policies to help support recovery and price stability in their own countries. As the modern literature on the Great Depression demonstrates, these policies confer net benefits on the world economy as a whole and should not be confused with zero- or negative-sum policies of trade diversion. In fact, the simultaneous use by several countries of accommodative policy can be mutually reinforcing to the benefit of all.

My only remark would be that in the advanced economies, but in the Euro area in particular, such expansionary measures should be pursued with even greater aggressiveness.