Earlier this week, the BLS released new estimates of state employment, based upon Quarterly Census of Employment and Wages (QCEW) data through September 2012. The figures for Wisconsin have been substantially revised upward. As indicated in previous posts [1] [2] , census data had indicated substantially higher nonfarm payroll employment than that derived from surveys.

The Upward Revision in Context

Figure 1 depicts the data, pre-benchmark, the most recent release, what I had previously estimated as employment, based upon an estimated relationship that held before the implementation of new estimation methods by the BLS (see this post), and finally, the level of nonfarm payroll employment implied by Governor Walker’s promise to create 250,000 jobs by the end beginning of 2015.

It is interesting that the estimates I generated based upon a historical relationship between nonfarm payroll employment series and the QCEW roughly fits the revised BLS series. That being said, employment remains 2.1% (log terms) below the path promised by Governor Walker. In fact, two years into the Walker Administration, employment is only 1.6% above where it began.

Revisions across the Country

Wisconsin is not alone in terms of the revisions. As the BLS observes:

Graph 2 from the BLS report summarizes the extent of the revisions across states: 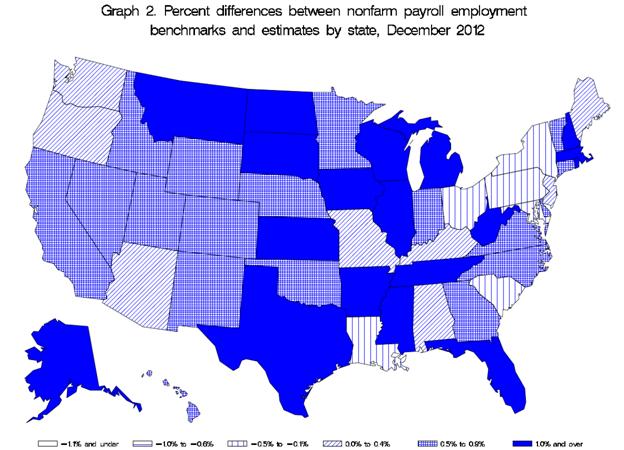 Since the neighboring states’ employment series were also revised upwards, it is no surprise that Wisconsin continues to lag those neighbors in terms of progress since 2011M01.

Wisconsin’s cumulative employment growth deficit since 2011M01 relative to the United States overall is 1.7% (log terms), and relative to Minnesota is 2.1% (interesting considering the Governor’s remarks regarding Minnesota’s economic policies [3]). The growth deficit relative to hard-hit Illinois is 0.7%. Moreover, in January, Wisconsin employment declined, by 2.6% on an annualized basis (in absolute value, slightly more than the standard deviation of growth rates over this sample).