Governor Walker delivered his State of the State address tonight (video here). From the press release:

“Tonight, we are laying out a plan to move Wisconsin further down the road to prosperity,” Governor Walker said. “Our friends and neighbors are going back to work and job creators are expanding their businesses. Thanks to sound fiscal management, I am proud to announce further tax relief for Wisconsinites and additional funding for worker training. We will continue to work diligently until everyone who wants a job can find a job.”

Here is a comparative assessment of Wisconsin’s performance, as measured by the Philadelphia Fed’s coincident indices. 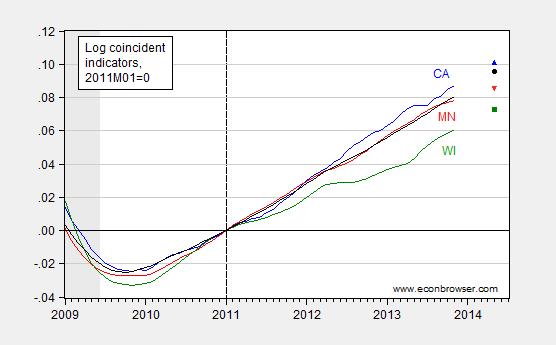 Hence, one can roughly interpret the trend in the coincident index as a measure of real GDP. In this context, Wisconsin growth has lagged the overall United States by 2 percent cumulative growth since 2011M01 (keeping in mind that several prominent individuals have castigated the US growth record over the past two years, while studiously avoiding comment on the lagging growth performance in Wisconsin).

Using the Philadelphia Fed’s leading indices as forecasts, the gap will widen to 2.3 percent in the next six months. The gap between Wisconsin and California will widen to 2.8 percent.

In terms of policies, the governor proposed additional tax cuts. From the Marley and Stein in Milwaukee Journal Sentinel:

He said his “blueprint for prosperity” would trim property and income taxes by $504 million over the next 18 months and put more than $100 million more into the state’s rainy-day fund.

What are the fiscal implications?

Walker’s overall plan would add perhaps $100 million to the $708 million shortfall previously projected for the next two-year budget, under the approach used by the Legislative Fiscal Bureau. If the new tax money were simply put in the bank, the state would go into the 2015-’17 budget with a $1.25 billion surplus, the budget office reported Wednesday.


The fiscal bureau’s so-called “structural deficit” isn’t the only way to measure the health of the state budget, but it’s a tool that many lawmakers embrace.

See also Wisconsin Budget Project for more on blank spots in the proposed budget, the structural budget deficit, and investment (or lack of) in education (including technical colleges).

For a survey of the academic literature on tax cuts at the state level and economic growth, see here.

Finally, for a take on the State of the State, it is useful to refer to employment; employment figures for December are not yet out, but here are the November figures. 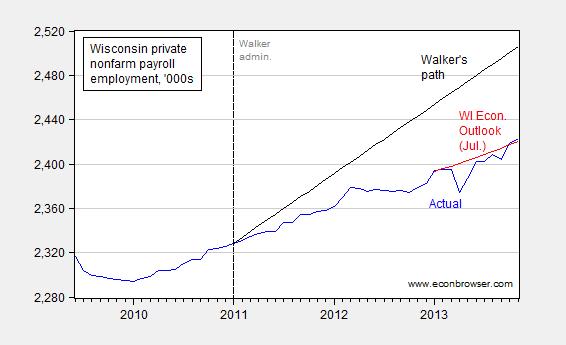 
As of November, private nonfarm payroll employment in Wisconsin is 83 thousand below the trend consistent with the 250,000 net job creation target recommitted to by Governor Walker back in August of 2013 (and originally declared in his 2010 campaign). 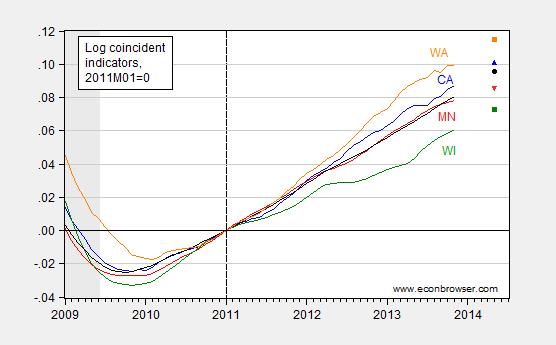 
As far as I recall, Washington state did not embark upon massive cuts to k-12 education, at least nowhere near slash-and-burn Wisconsin. See this CBPP post, and the figure drawn from that post, below. 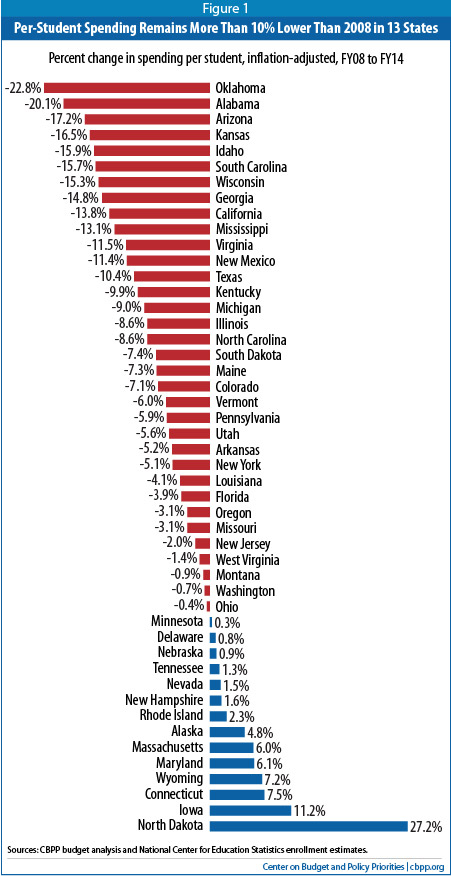 
So, Wisconsin is 7th…in slashing per pupil spending.

31 thoughts on “Wisconsin’s State of the State”