Tensions between Russia and Ukraine have prompted some discussion of revisiting U.S. policy on exports of oil and natural gas.
Speaker of the House John Boehner (R-OH) last week called for faster Energy Department approval of facilities to export liquefied natural gas (LNG). Senator Lisa Murkowski (R-AK) called for lifting the ban on U.S. crude oil exports. Here I offer an assessment of these proposals.

There is no question that Russia’s critical importance in world energy markets is a key factor deterring the West from responding more vigorously to recent events. Russia accounts for about 1/8 of world production and net exports of crude oil and 1/5 of world production and net exports of natural gas. Russia is a key supplier of natural gas for Ukraine and Europe. The rest of the world cannot get by without energy from Russia. If the U.S. or Europe try to respond to recent events by imposing significant sanctions, one possible response would be a partial embargo by Russia on sales of energy to those countries that would be most vulnerable to such a disruption.

Although Russia’s strong hand derives in part from its role as a critical supplier of energy, it is hard to see how relaxing restrictions on U.S. exports of oil and natural gas would make much difference for any of these calculations. Even if more LNG facilities were approved tomorrow, it would still take years before they would begin delivering gas to customers, and it’s inconceivable that the U.S. could ever replace the 7.4 trillion cubic feet of natural gas that Russia exported in 2012. Notwithstanding, Europe’s vulnerability to a disruption in natural gas supply is going to be an issue for some time, and more U.S. exports might mitigate that. Ambassadors from Hungary, Poland, Slovakia and the Czech Republic support Boehner’s call for increased LNG exports.

In the case of crude oil, it is even harder to make the case for relaxing export restrictions because of geopolitical considerations. Despite recent increases in U.S. production, the U.S. still imports on net around 5.5 million barrels a day. And the U.S. will continue to be a major net oil importer as far into the future as anyone can see.

The principal arguments for relaxing restrictions on U.S. oil and natural gas exports are economic rather than geopolitical. In the case of oil, the first obvious question to address is why we would want to export any oil at all when the country as a whole remains such a huge net importer? The answer has to do with differences in the types of oil that can most efficiently be processed by different refineries and the cheapest way to transport the right type of oil to each refinery. For example, the overall mix of light and heavy crude used by U.S. refineries has changed relatively little over the last decade.

Notwithstanding, the surge in domestic crude oil production has been disproportionately in the lighter crude oil. The result is that U.S. imports of light oil have plunged while we’re still importing as much of the heavier stuff as ever. 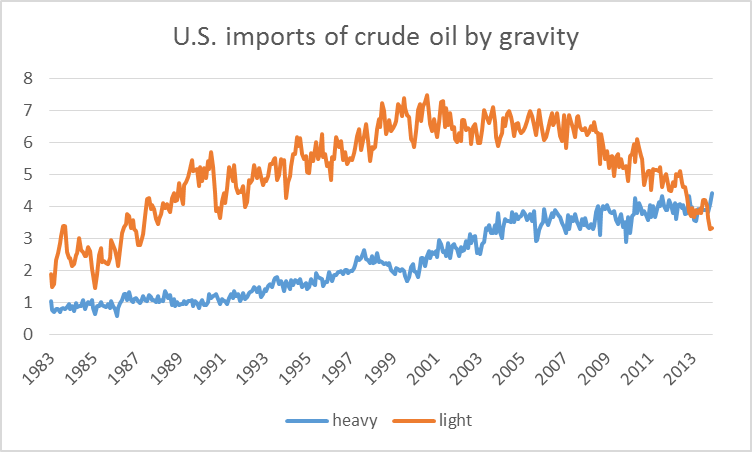 Given the existing infrastructure for transporting and refining oil, the cheapest way to get each individual product to the location where it is most valuable could turn out to involve simultaneously importing and exporting different kinds of crude oil from different locations.

We’re already doing a version of that. Access to cheap crude in the central U.S. has given refineries there a big international advantage. Unlike crude oil, we have adequate transportation infrastructure to move the refined product to wherever it’s most in demand, and no legal restrictions on export. As a result, refined products like gasoline and diesel end up being shipped all over the world, and U.S. exports of refined products have surged. 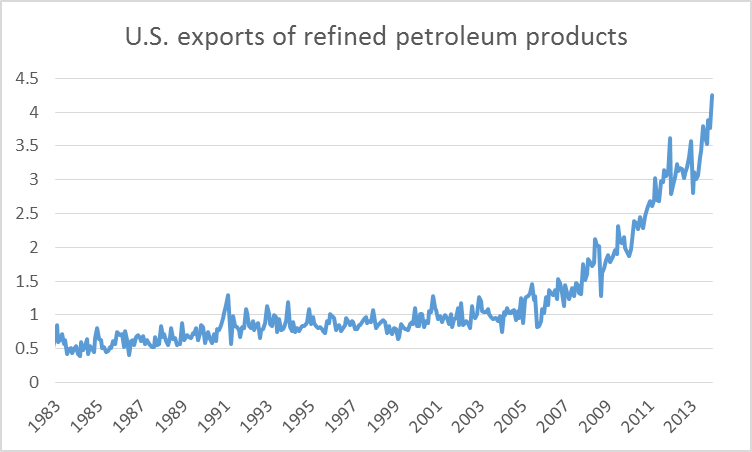 Interestingly, even without legislative action on relaxing the ban on crude oil exports per se, companies are getting more creative in figuring ways around it. We’re starting to see mini-refineries that process the hydrocarbons just enough to qualify as producing a “refined product” for purposes of getting around the legislative ban, which can then be shipped abroad for further processing.

What are the economic consequences of all of this? Any time one relaxes trade restrictions, there are winners and losers. Domestic producers of the crude oil would be better off because they are able to sell their product for a higher price to international buyers, and domestic consumers (for example, U.S. refineries) would be worse off because they have to pay that higher price for buying the product they use. But exporting a product when there is a foreign buyer willing to pay more than the domestic buyer is usually a more efficient way to do things. The benefits to domestic producers from allowing those exports are bigger in dollar terms than the losses to domestic consumers.

Any geopolitical implications of those efficiency gains have to be modest indeed. One might argue that the higher price received by producers of crude oil in North Dakota and Texas will provide an incentive for more total production than we would otherwise see. While I believe that to be the case, to propose that the quantities are large enough to make a difference for the balance of geopolitical power seems farfetched.

Similar issues are at play in the question of exporting U.S. natural gas. U.S. producers of natural gas would gain, U.S. consumers of natural gas would lose, but the benefit exceeds the cost in dollar terms. One might try to argue that an important consumer of cheap U.S. natural gas is American manufacturers, and that trying to rebuild U.S. manufacturing has other benefits beyond the immediate profits for the companies and workers involved. And it’s possible that the companies seeking to export LNG have miscalculated what the supply and price are going to be at the time those facilities come on line.

There are clear limits to the ability of an overseeing government planner, however wise and benevolent, to make these calls. Indeed, the success of modern economies comes from letting these decisions emerge from the decentralized calculations of thousands of different individual stakeholders. If somebody thinks they can make a profit– in other words, thinks they see a more efficient way to make use of existing resources– by investing their own money in new LNG export facilities, I’m inclined to say, let them try. For this reason, I would be in favor of relaxing restrictions on U.S. exports of both crude oil and natural gas.

But I would not want to make excessive claims about how much that is likely to accomplish.

102 thoughts on “Relaxing restrictions on U.S. exports of oil and natural gas”