The employment release reported a 209,000 net increase in nonfarm payroll (NFP) employment was below consensus, but still represented the sixth straight month of +200K net job creation. The net change in private NFP was 198,000. Here I want to note (1) the household survey based alternate measure of nonfarm payroll employment also continues to rise; (2) revisions in NFP and private NFP have typically been positive in recent months; (3) the 2014Q1 drop in GDP seems a little out of line with labor input.

Regarding employment, trends in the official NFP and the household series adjusted to conform to the NFP concept are positive. 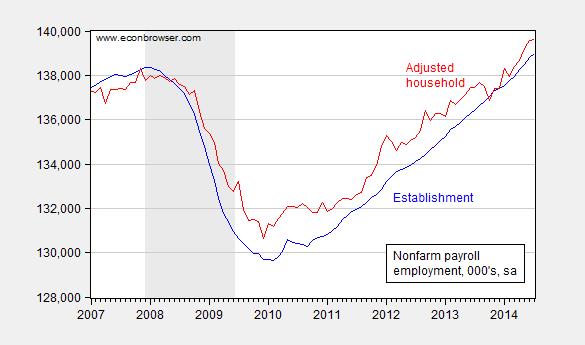 The household adjusted series is a check for those who are skeptical of the BLS firm birth/death model. It’s interesting that the series is above the official series during the expansion, in contrast to the pre-recession period when it typically lagged.

Next, observe that recent revisions have typically been to the upside. 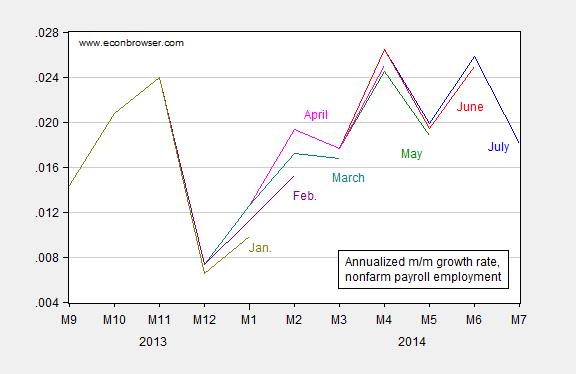 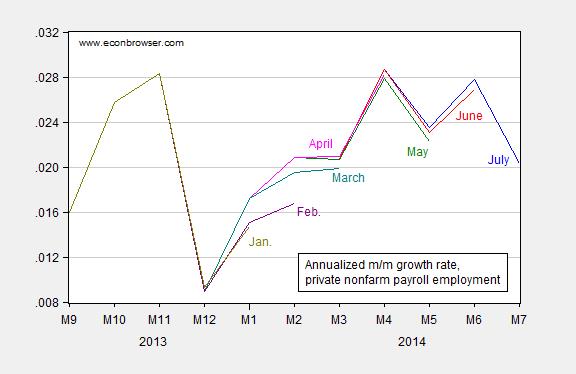 This pattern suggests that July’s figure will be revised upward as well.

Finally, it’s of interest to see how labor input has covaried with output, particularly over the past couple quarters. In Figure 4, I present the first log difference in GDP, NFP, and aggregate private hours. 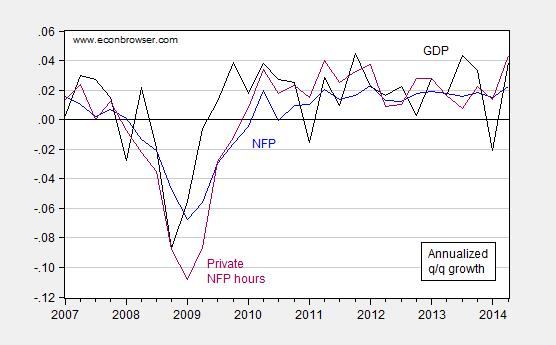 Notice that the first quarter growth rate was revised up from -2.9% to -2.1% (SAAR) in the comprehensive annual revision. Nonetheless, the gap between (the growth rates of) hours and output seems pretty large. This point is shown in a slightly different form in Figure 5. 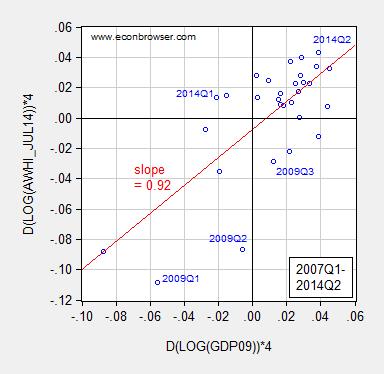 The 2014Q1 observation is far off the regression line — but not as far as in 2009Q1-Q2. However, these two quarters are periods when government consumption and investment rose substantially, in part due to the ARRA (recall aggregate hours are only for the nonfarm private sector). Hence, it may be that Q1 growth rates will be eventually revised noticeably upward.

“Every new job is welcome news, but with millions looking for work we can’t celebrate a modest 209,000 jobs a month. Five years after the recession ended, the Obama recovery remains stuck in second gear.”

12 thoughts on “Parsing the Employment and GDP Releases”