For the last 3 years, European Brent has mostly traded in a range of $100-$120 with West Texas intermediate selling at a $5 to $20 discount. But in September Brent started moving below $100 and now stands at $90 a barrel, and the spread over U.S. domestic crude has narrowed. Here I take a look at some of the factors behind these developments. 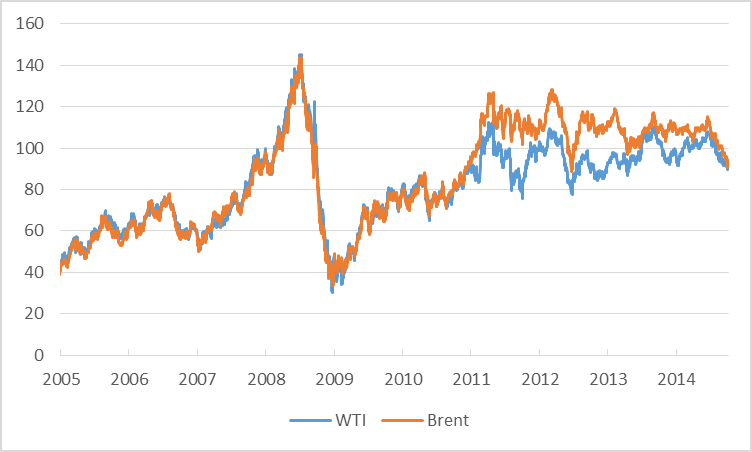 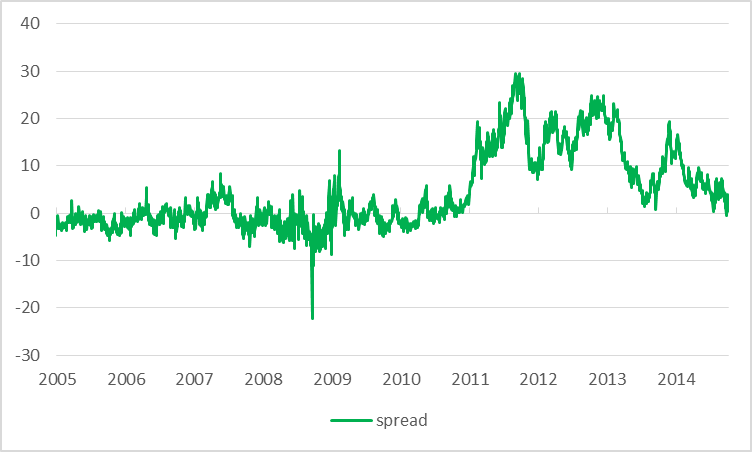 Prices of many other industrial commodities have also declined over the last year, silver and iron ore more than oil. One factor has been weakness in Europe and Japan, which means lower demand for commodities as well as a strengthening dollar. The decline over the last year in the price of oil when paid for with Japanese yen is only about half the size of the decline in the dollar price.

In terms of factors specific to the oil market, one important development has been the recovery of oil production from Libya. The latest Monthly Oil Market Report from OPEC shows Libyan production up half a million barrels per day since this summer. Libya is hoping to add another 200,000 barrels/day this month and 200,000 more by early next year. This would be a significant addition to the market, though the situation in Libya remains quite unstable. 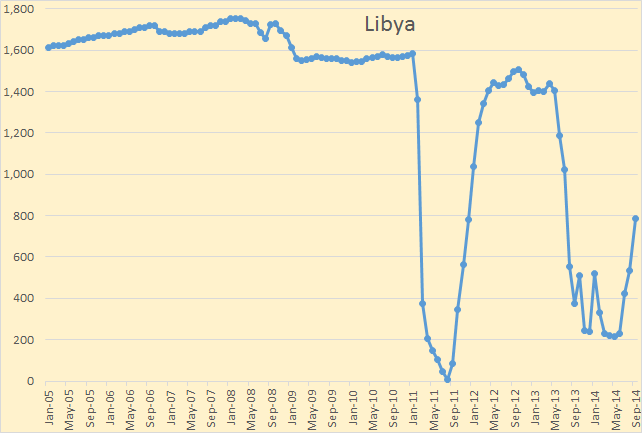 But the biggest story is still the United States. Thanks to horizontal drilling to get oil out of tight underground formations, U.S. field production of crude was 2 million barrels/day higher in 2013 than it had been in 2011. And the EIA’s new Short-Term Energy Outlook released this week expects we’ll add another 2 million b/d over the next two years. That’s unquestionably enough to start moving the world price. 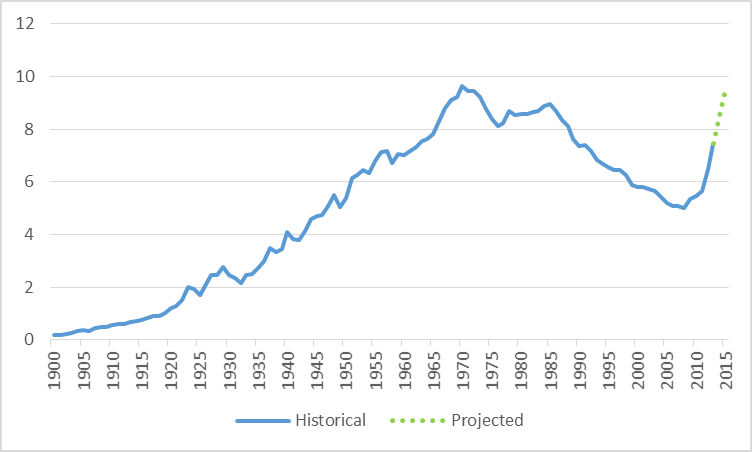 As I’ve noted before there’s a basic limit on how much U.S. production is capable of lowering the world price. The methods that are responsible for the U.S. production boom are quite expensive. Just how low the price can go before some of the frackers start to drop out is subject to some debate. A report in the Wall Street Journal last Thursday provided assessments like these:

“There could be an immense amount of pain,” said energy economist Phil Verleger. “As prices fall, you will see companies slow down dramatically.”

Paul Sankey, an energy analyst with Wolfe Research LLC, said the first drillers to react to declining crude prices would be some in the least productive fringes of North Dakota’s Bakken Shale. “We’re not quite there yet,” he said, but a further drop of $4 or $5 a barrel will force companies to begin trimming their capital budgets”….

Some U.S. oil fields, including the Eagle Ford Shale and Permian Basin in Texas, would remain attractive for drillers even at much lower oil prices. An analysis by Robert W. Baird & Co. said prices could drop to $53 a barrel in certain parts of the Eagle Ford and still be profitable to drill.

And here are some of the estimates reported by Bloomberg:

Shale oil is expensive to extract by historical standards and only viable at high-enough prices, Ed Morse, Citigroup Inc.’s head of global commodities research in New York, said by phone Sept. 23. Oil from shale formations costs $50 to $100 a barrel to produce, compared with $10 to $25 a barrel for conventional supplies from the Middle East and North Africa, the Paris-based International Energy Agency estimates.

“There is probably something to the notion that if prices fell suddenly to $60 a barrel, the production growth would turn negative,” he said.

Brent crude could drop to $80 a barrel before triggering a slowdown in investment from U.S. shale-oil drillers, Fitch Ratings said in a report today.

If Europe’s woes worsen, U.S. tight oil production continues its phenomenal recent growth, and Libya can continue to increase production, we may soon find out who is right.