The deterioration in Kansas state finances not only continues unabated — it is seemingly accelerating. 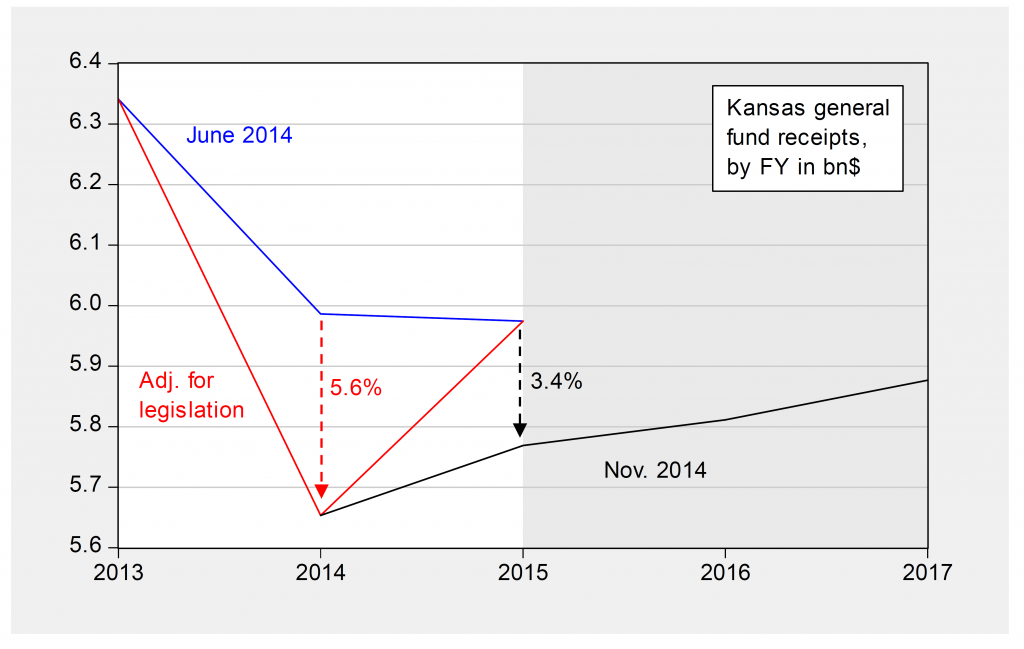 As the Kansas budget blog observes, FY 2015 approved spending plus additional costs required to pay for Medicaid and school finance totals $6.427 billion. That means that even after completely draining the reserves in the state bank account, $279 million must still be cut from already approved spending just to keep the state solvent.

From the Wichita Eagle:

The state of Kansas will not have enough money to pay its bills through June unless it cuts $279 million in spending, according to updated revenue estimates.

Just a week after being re-elected, Gov. Sam Brownback is staring down a budget crisis, and nonpartisan analysts point to his signature policy as the cause.

Budget director Shawn Sullivan had the unenviable chore of presenting the state’s dire fiscal outlook at a news conference Monday evening at the Capitol. The state must cut $279 million for the current fiscal year, which ends in June, and another $436 million in the next fiscal year.

The shortfall is primarily being driven by the state’s income tax cuts, which Brownback signed into law in 2012, confirmed Raney Gilliland, director of the state’s nonpartisan Legislative Research Department. The state has lowered its expectation for individual income tax revenue by $239 million since April.

Sullivan said he had not discussed raising taxes or delaying scheduled tax cuts as possible solutions to righting the state’s financial ship.

Gilliland said the state’s current budget woes differed from the crisis it underwent during the recent recession, when the federal government came to the aid of Kansas and other states that saw revenue plummet.

“It’s not a national phenomenon, so I’m not expecting under these circumstances for the federal government to come to our rescue,” Gilliland said.

Gilliland said it was “yet to be determined” whether the income tax cuts were stimulating more economic activity than the state would see otherwise. The state is projected to see slower growth next year than the nation as a whole.

On the campaign trail, the governor repeatedly promised that economic growth would cover the state’s projected shortfall.

Below is a depiction of the Kansas economic outlook, based on the Philadelphia Fed’s leading indices. 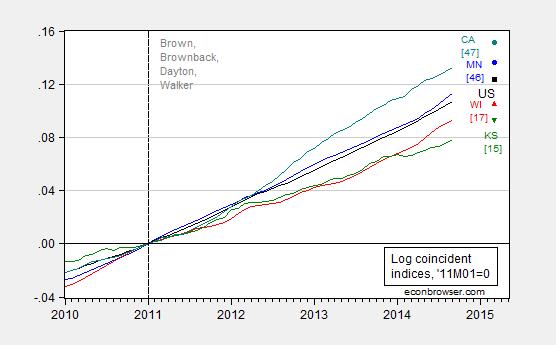 The outlook for the Kansas economy does indeed look rather lackluster for the next half year.

Update, 11/13, 9AM Pacific: From Barro, “Kansas Announces Big Budget Gap, but True Gap May Be Even Larger,” NYT today:

State officials said this week that the tax cuts championed by Gov. Sam Brownback would force them to start a new round of substantial budget cuts before the end of June.

They need to cut $279 million, $239 million of which is attributable to lower-than-expected personal income tax collections. Those aren’t small numbers in a state budget of approximately $6 billion and where revenues have already declined sharply. Kansas state revenues dropped 11 percent in the fiscal year 2014 (which ended in June) after the tax cuts took effect.

But that may not even be the whole picture. A close look at the state’s new revenue projections makes clear they are highly optimistic, even after this week’s cut in the forecast. Kansas says it expects to collect slightly more personal income tax this year than it did last year, even though, with four months of collections in, they are 11 percent behind last year’s pace.

If the last four months’ performance is similar to the next eight, the state won’t miss its original income tax estimate by $239 million.

And because the state was already scheduled to spend down nearly its entire rainy-day fund balance (which totaled over $700 million in 2013) by the end of this year, it will have to respond to any widening budget gap with some combination of further spending cuts and tax increases.