Today we are fortunate to have a guest contribution by Jinzhao Chen (Paris School of Economics) and XingWang Qian (SUNY Buffalo State). This post is based on this paper.

The 2008 financial crisis and the subsequent US Fed’s quantitative easing (QE) policy followed by its “taper” expectation caused wild swings of capital flows across the border of emerging economies. Despite disruptive, many emerging economies, including Brazil, Taiwan, and South Korea, had a successful experience with capital controls to manage volatile capital flows and fended off the contagion (Gallagher, 2011; IMF 2011).

Capital controls are back (Eichengreen and Rose, 2014)! The 2008 global financial crisis opens a new chapter of policy discussion on how to use capital controls to deal with the boom-and-bust capital flows.

Maintaining the primacy of financial liberalization, IMF started to soften its opposition and in 2011 partially recognized the appropriateness of capital control; then in 2012 IMF endorsed it in an institutional view (IMF 2012) and went on to recommend a set of guidance regarding the appropriate use of capital flow management (CFM) (IMF 2013).

China has a history of having recourse to tough regulations on cross-border capital flows, particularly on capital account flows. Tight controls on capital account prevented China from financial instability. For instance, China survived the storm of the 1997 Asian financial crisis. The then US Treasury Secretary Rubin praised China as the “island of stability” in the region. With the capital controls, China seemed to manage the risk of possible contagion from the 2008 global financial crisis well.

Meanwhile in the past decade, China made great efforts to liberalize its capital account to confront some emerging economic challenges, e.g. global imbalance of payment and slowing-down economic growth. PBOC, China’s central bank, outlined a three-stage reform proposal in 2012 to promote the international use of the RMB and to open up China’s capital account in ten years. However, IMF warned via the Wall Street Journal (2013) that speedy liberalization could trigger massive capital exodus if not properly handled. The estimated net outflows from China could be up to 15% of the country’s GDP (Bayoumi and Ohnsorge, 2013) over several years. Domestic banking system may not be resilient enough to withstand such shocks, thus could trigger a financial crisis.

In the paper entitled “Measuring the On-going Changes in China’s Capital Flow Management: A de jure and a Hybrid Index Data Set,” we create a new indices data set measuring the changes in China’s capital controls, expecting that the indices help better study China’s capital controls and assess the process of capital account liberalization and its implications for Chinese economy.

Our monthly indices data are from 1999 to 2012 (due to the availability of AREAER data), and comprised of two groups of indices, de jure and hybrid indices. Both groups include indices created for selected subcategories of China’s capital account, including equities, bonds, money market instruments, commercial credits, financial credits, and FDIs. Further, similar indices are generated from the aspects of controlling on inflows and outflows, resident and nonresident. Given the fact that China’s total imports and exports account for more than 50% of GDP, and that investors could easily move their capitals in and out via, for example, trade mis-invoicing (Cheung and Qian, 2010), we also create indices for China’s control on current account payment flows.

The indices data are compiled by extracting the detailed information from the text of IMF’s Annual Report on Exchange Arrangements and Exchange Restrictions (AREAER). China usually implements policies step by step in the gradualism style, we extract those information of small-step policy measures from the line of the text in IMF’s AREAER and some supplementary materials from other sources. Our goal is to incorporate as detailed and accurate information as possible about China’s capital controls.

Given that we measure the change of intensity in capital controls, we set the level of capital control at January 1999 as the benchmark and give a score of 0. Whenever there is a policy change that tightens the capital control, we add value 1 to the existing score. If there is a control-relaxing policy change, we subtract 1 from the existing score. Otherwise, we keep the score unchanged from the existing one. In this way, the higher score of our indices represents the tighter controls that Chinese government imposes on capital flows.
In comparison to other indices, for instance, Chinn-Ito index, Quinn (1997) and Schindler (2009) index, our indices measure the intensity changes in China’s capital controls over time in monthly frequency, display more variation during the sample period (Figure 1) and contain less subjective judgment. 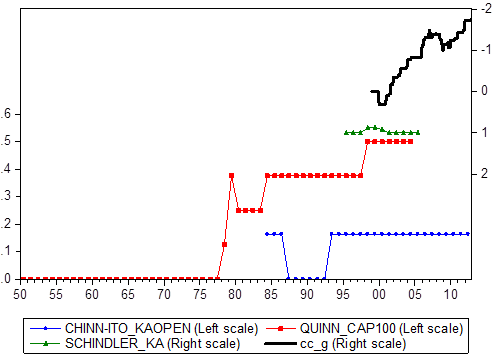 Our indices reveal a persistent but uneven process of liberalizing China’s capital account since 2000. As shown in Figure 2, there is a clear downward trend (a lower index represents a more liberalized capital account) in the gross capital account control index (CC_G). China kept loosening the control grip on its capital account, although there was a temporary reverse over the concern about the spillover of 2008 global financial crisis. The control index for gross flows of current account (CA) also indicates a liberalizing trend, but with a much slower pace than the capital account. Particularly during the period from 2005 to 2008 before the global financial crisis, rather than continuing liberalizing, China stringed up the trade payments controls. It is probably due to the fact that China was using policy tools to deal with the booming trade surplus to ease the political pressure from major trade partners.

In general, the control indices of both current account and capital account move in tandem, revealing that the Chinese government coordinates capital control tools in both current account and capital account. In addition, our indices may well reflect how the government implements capital control policies in response to major economic events and shocks. For instance, in responding to 2008 financial crisis (pinpointed at the collapse of Lehman Brother in Sept. 2008) when capital “flight to quality” from emerging economies, Chinese government encouraged capital inflows by raising QFII cap from $800 million to $1 billion and reduced the lock-up period for certain medium and long-term capital to 3-month from six-month to 1 year; and allowed foreign investors to participate in interbank foreign exchange market. At the same time, China tightened capital outflow measures to strictly enforce QDII cap on the net amount of funds remitted abroad. 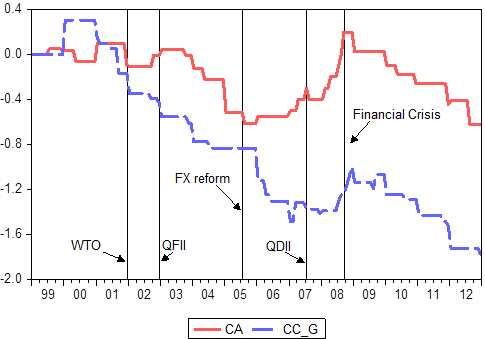 This post written by Jinzhao Chen and XingWang Qian.