Here are my thoughts on options for handling Greece’s debt.

Let me begin with the following question: if someone makes a new loan to the Greek government, are they ever going to get paid back? Let’s start by being clear about what we mean by “paid back.” There’s nothing fundamentally unsound about the consols that the British government sometimes used historically to borrow. These bonds were intended to pay interest forever but never repay the principal. In practical terms it’s not really that different from a 30-year bond, nor for that matter from a one-year bond that creditors always roll over. As long as the interest payments always get made, the buyer can consider himself fully “paid back” in the present-value sense for the consol he purchased, even if the principal itself is never repaid.

But the question is, where will the Greek government get the funds with which to make future interest payments? If they always just borrow new sums with which to make interest payments as they come due, it’s obviously not a good deal for the creditors. The debt just grows over time, and creditors are only being paid back with their own money. If you followed the cash flow over time, you’d find it’s always a one-way street from creditors to borrowers, and amounts to an outright gift from creditors, not a loan that is ever paid back in any sense.

If the normal budget is in deficit but the primary budget is in surplus, it means that the debt is going to grow over time, but at least some of the interest payments are being made with real funds instead of with new borrowing. If you work through the math, it turns out that as long as the primary budget surplus is equal to annual interest expense, creditors are being fully repaid in present-value sense, even though the debt itself is never retired.

But if the primary surplus is less than the annual interest expense, the debt will be growing, and repaying in present value requires continual revenue increases or budget cuts. The question anyone lending new sums to Greece must contemplate is whether that’s a plausible scenario.

What are the numbers for Greece’s primary surplus? It turns out it’s harder to find a straight answer to that question than it should be. The graph below plots the figures from the IMF World Economic Outlook database. These claim that after years of big deficits, Greece finally ran a primary surplus of 1.2% of GDP in 2013. 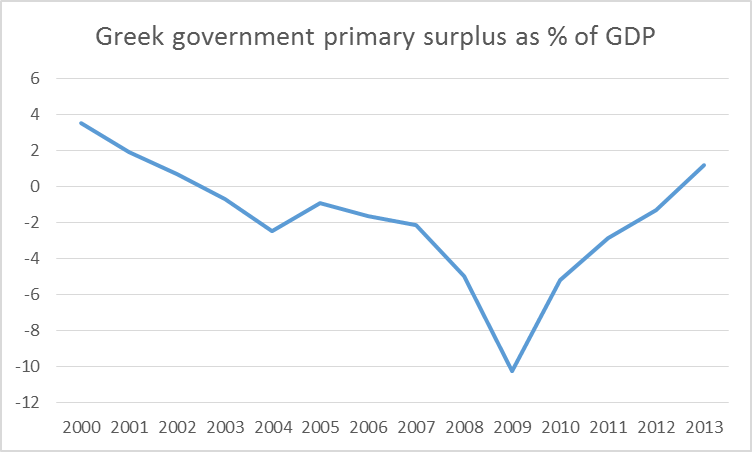 But the ECB claims instead that Greece ran a primary deficit of 8.3% of GDP rather than a surplus in 2013. What’s the controversy? Based on this report from the Wall Street Journal, it appears that the IMF must be excluding one-time expenditures in support of the Greek banking system, which amounted to 10.8% of GDP. In terms of the calculus of whether external creditors on net were getting repaid anything in 2013, the ECB concept appears to be the correct one– Greece was still running a big primary deficit in 2013 in the sense that any interest payments they made that year, along with much of their spending, were paid for with newly borrowed money.

For 2015 the IMF is anticipating a primary surplus of 3% of GDP. But Daniel Gros attributes the surplus so far in 2015 to factors such as the government not having made cash payments yet for goods and services already ordered or provided– otherwise known as new government borrowing not recorded in the official measures of government debt.

This is why creditors are asking for more progress from Greece on the primary surplus before extending additional funds. But here’s the response of Greek finance minister Yanis Varoufakis:

Greece’s drama is often misunderstood in northern climes because past profligacy has overshadowed the exceptional adjustment of the past five years. Since 2009 the Greek state’s deficit has been reduced, in cyclically adjusted terms, by a whopping 20 per cent, turning a large deficit into a large structural primary surplus. Wages contracted by 37 per cent, pensions by up to 48 per cent, state employment by 30 per cent, consumer spending by 33 per cent and even the current account deficit by 16 per cent.

Alas, the adjustment was so drastic that economic activity was choked, total income fell by 27 per cent, unemployment skyrocketed to 27 per cent, undeclared labour scaled 34 per cent, public debt rose to 180 per cent of the nation’s rapidly dwindling GDP, investment and credit evaporated and young Greeks, just as their Irish counterparts, left for distant shores, taking with them huge quantities of human capital that the Greek state had invested in them.

What Greece needs now is not more cutbacks that push an impoverished populace into greater indignity, or higher tax rates and charges that crush what is left of economic activity. These “parametric” measures, as the institutions call them, have been excessive, the result now being a nation on its knees.

Suppose we granted the claim that further tax increases or spending cuts would be crippling and self-defeating. If true, doesn’t that make a pretty good case that Greece does not have the capability to make real interest payments on any new debt? And if it is as simple as implementing a few reasonable reforms, why were these not instituted earlier, and how effective can they be expected to be? Why wouldn’t they also depress demand in an already depressed economy?

Others argue that potential lenders would reap other benefits that compensate for the fact that the loans themselves cannot be expected to be repaid. Louka Katseli, chair of the National Bank of Greece, maintains that

the cost for the eurozone, which they are down-playing, is really serious…. If the markets decided the eurozone is not an irrevocable decision and a government can be declared insolvent, then the first thing that would happen is that there will be a speculative attack by the markets on the next weakest participant in the eurozone or the euro.

But that cuts two ways. If Greece is able simply to write off its debts without repercussions, what would become of political sentiment in Portugal, Spain, Italy, and Ireland? Perhaps Europe can successfully draw a sharp line, saying yes we’ll give you full support if you can achieve specific fiscal targets, but if not, you’re on your own, and in so doing provide a more credible defense for other vulnerable countries than is offered by the current status quo.

The bottom line for me is that Greece’s current debts and any new loans that get extended from here are not going to be repaid in the present-value sense defined above. The current debt load and its associated interest bill are simply too big. The only solution is default on a significant portion of outstanding Greek debt. Indeed, significant debt restructuring is a necessary step for Greece to move forward, whether within the euro or based on a new currency. My view is that any realistic negotiations at this point simply have to take those facts as given.