It’s very clear that two things have to happen from here. First, Greece needs relief from its mountain of debt, and second, the country needs to find a way to become more competitive economically.

The traditional way these goals would be achieved is first, creditors would accept substantial haircuts and restructuring of the outstanding debt, and second, a big currency depreciation would give Greek exports a competitive international advantage to get the economy growing again without new borrowing.

The main complication preventing these steps in the current situation is Greece’s participation in the euro system. On the first issue, this meant that European governments, banks and the ECB extended substantial loans on the (mis)understanding that Greece’s membership in the European union meant default was impossible. On the second issue, devaluation would seem not to be an option because Greece does not have control over the value of its currency.

But the reality that everyone needs to recognize is that, one way or another, both changes are eventually going to happen. It’s just a question of when and how.

That Greece’s creditors are going to have to accept substantial restructuring of the sums they receive is simply an unavoidable consequence of the fact that, through a combination of a lack of tangible economic resources and the reality of Greek politics, Greece isn’t able to make the annual interest payments on its current load of debt. This reality has been quite evident for some time, though up to now Europe kept valiantly kicking this can down the road. 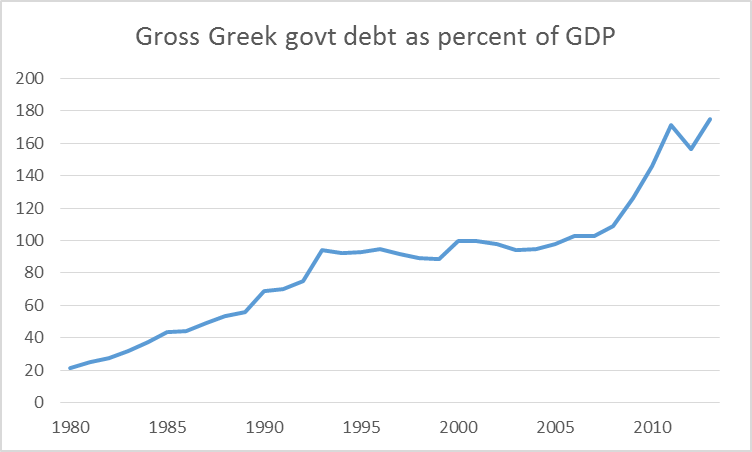 And if we do not get a real depreciation in the form of a change in the nominal exchange rate, the same goal can be achieved through a big drop in Greek wages and prices. The trouble is, this normally doesn’t happen unless there is a huge amount of unemployment. For example, it took the Great Depression of 1929-33 in the United States to bring prices and wages here down by a third. The New York Times has some eye-opening graphs demonstrating that the downturn in Greece has already become worse than what the U.S. saw in the Great Depression of the 1930s. 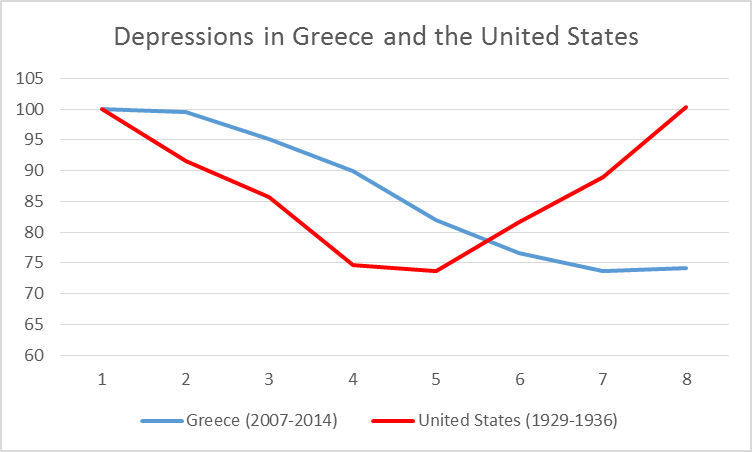 But it would have been so much easier if, rather than ask workers and pensioners to accept a 20% cut, Greece instead experienced a 60% increase in prices of imported goods with nominal wages and pensions unchanged. In the latter case, it would be clear to everyone that the painful adjustments were an unavoidable consequence of international developments and the country’s current circumstances, rather than a deliberate decision by some perceived political or economic adversary. Greece could become more competitive without having to go through a depression to get there.

Is there any better way to do this without leaving the euro? Here’s one idea that may sound a little crazy, but perhaps no less crazy than some of the wishful thinking that’s been calling the shots so far. Suppose the Greek government were to declare, we simply do not have the euros to make the payments we’ve promised to government workers, pensioners and suppliers of goods and services to the government. So we will make those payments 60% with euros and 40% with newly created Government Value Certificates. What are these certificates good for? Well, one thing you can do is pay up to 20% of any tax obligations you have with them, at par (one certificate discharges one euro in tax obligations), this year, or any time in the future. Greece might also consider a law specifying that a private firm could fulfill its legal obligations to employees by paying up to 20% of the euros owed with certificates.

Such certificates would have a direct market value. If you wanted, you could sell any certificates you have or buy any certificates you want from somebody else. The certificates would trade on the private market at a significant discount from par, based on factors such as how many new certificates people expect the government to issue next year and how useful they’re expected to be for paying future taxes. The size of the discount would determine how much of a de facto devaluation the program could achieve. In effect, this would amount to introducing a parallel currency.

Maybe you like that proposal, or maybe you don’t. But either way, some combination of debt forgiveness and real depreciation is going to occur, whether we like it or not.

And the sooner it happens, the better it will be for everyone.

58 thoughts on “Possible scenarios for Greece”