The “Fed Oversight Reform and Modernization (FORM) Act” was passed by the House of Representatives on November 19 despite the strong opposition of Janet Yellen who, in an open letter to Paul Ryan and Nancy Pelosi, called it a “grave mistake” that would be “detrimental to the economy and the American people” and a threatened veto by the White House. Adam Posen has written a blog post opposing the legislation, and John Taylor has responded to both Yellen’s letter and Posen’s blog. We discussed the legislation when it was first introduced and Janet Yellen’s earlier response in two previous Econbrowser blogs.

The FORM Act requires the Fed to specify a “Directive Policy Rule” that describes how the target Federal Funds Rate (FFR) would respond to intermediate policy inputs such as inflation and the output gap. If the FFR deviates from the target, the Fed Chair would be required to testify before appropriate congressional committees, and the Government Accountability Office would certify compliance. The Directive Policy Rule is similar in form to the Taylor (1993) rule, where the FFR equals 1.0 + 1.5π + 0.5y, where π is inflation and y is the output gap, but the Fed is free to choose the coefficients and the intercept.

In a paper, “Policy Rule Legislation in Practice,” that we presented last May at a conference on Central Bank Governance and Oversight Reform at the Hoover Institution, we pose the following question. Suppose that policy rule legislation had been in place for the past 60 years. When would the Fed have been in compliance, and when would there have been deviations from or changes to the rule? While the paper also considers the long historical period, we will focus here on policy during and after the Great Moderation. We use real-time data that was available to policymakers at the time that the FFR targets were set. In order to capture the effects of unconventional monetary policies, we use the shadow federal funds rate calculated by Wu and Xia (2015) after the FFR hit the zero lower bound.

Suppose that the Fed chose the Taylor (1993) rule to be the Directive Policy Rule with inflation measured by the CPI and the output gap constructed from Philadelphia Fed and Congressional Budget Office estimates of real-time actual and potential GDP. Figure 1 depicts the deviations, with the shaded areas highlighting deviations greater than two percent that we define as deviations from the target that would trigger congressional testimony. As originally shown by Poole (2007) and Taylor (2007), the deviations, which were small during the Great Moderation, increased after 2001 and, especially, between 2003 and 2005. Extending their analysis, the large deviations continued and increased after the Financial Crisis and Great Recession ended in 2009. 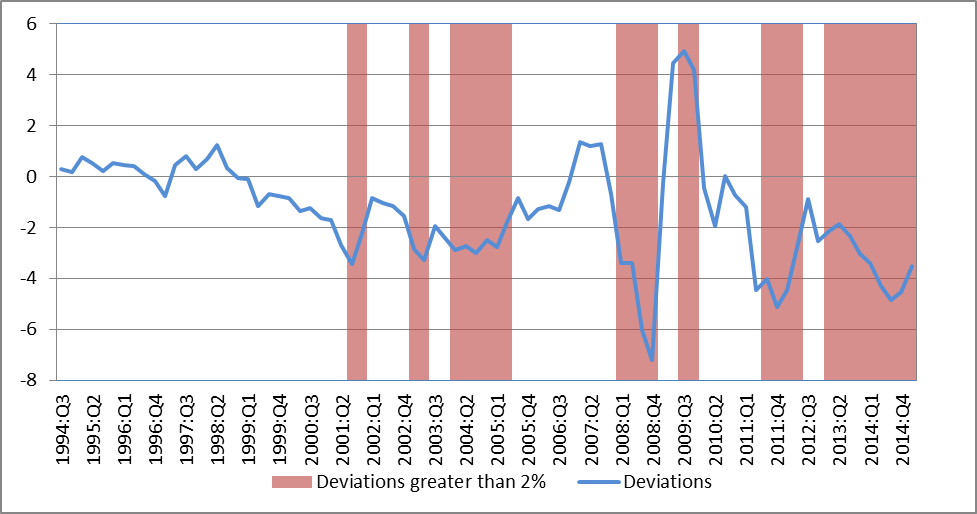 If the FORM Act was passed by 1990, it is quite possible that the Fed would have adopted a rule resembling the original Taylor rule with headline CPI inflation as the legislated policy rule. It is inconceivable, however, that this choice would have been continued through the 2000s and 2010s. We proceed to consider alternatives that have been proposed by prominent Fed officials. Donald Kohn (2007) argued that the large deviations reported by Taylor became much smaller if core, rather than headline, CPI was used to calculate inflation. Figure 2 shows that, if the Directive Policy Rule was the original Taylor rule with core CPI inflation, there would not have been deviations greater than two percent during 2003 – 2005. There would, however, have been greater than two percent deviations during 2001 – 2002 and 2011 – 2015. 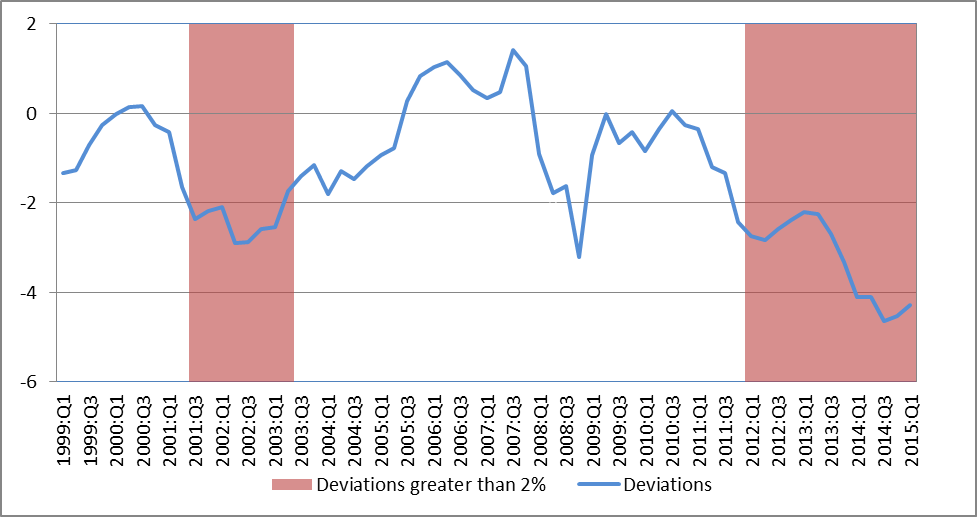 Ben Bernanke (2010) criticized Taylor’s analysis on the grounds that inflation forecasts, rather than inflation rates, should be the basis for prescribed Taylor rule policy rates and discusses how core PCE inflation was used by the FOMC as an indicator of the underlying trend of inflation. We compute deviations if the original Taylor rule with core PCE inflation was used for the Directive Policy Rule. As shown in Figure 3, while there were no deviations larger than two percent before 2012, including the 2003 – 2005 period highlighted by Taylor (2007), the deviations were greater than two percent for most quarters between 2012 and 2015. 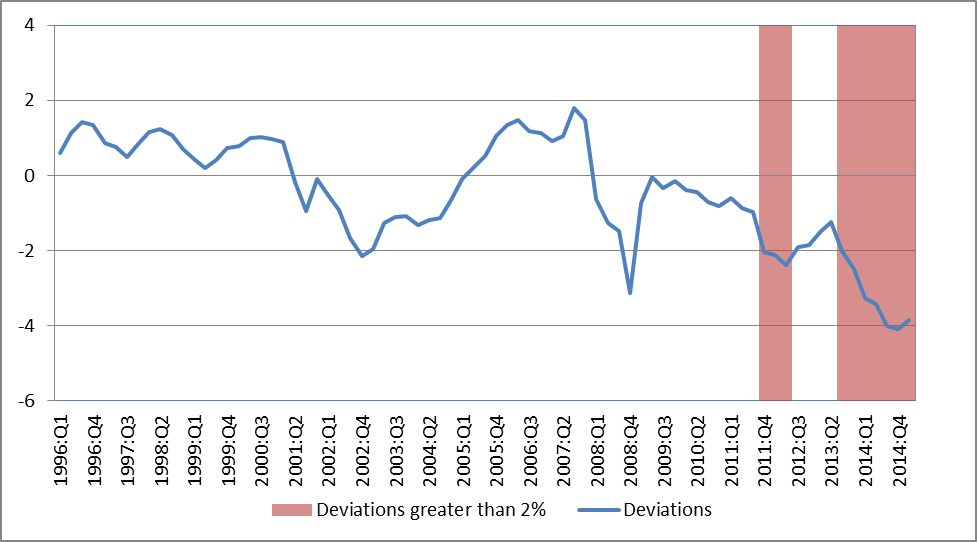 Janet Yellen (2012) argued that the modified Taylor rule with a higher output gap coefficient was both a better description of Fed policy and closer to optimal policy than the original Taylor rule. In order to analyze the impact of the legislation under this rule, we compute deviations if the modified Taylor rule with PCE inflation was used for the Directive Policy rule. Figure 4 shows that recent Fed policy under this rule is generally in accord with the legislation, as there were no deviations greater than two percent from 2011 through early 2014. There were, however, deviations greater than two percent in 1992, 2000 – 2004, 2008 – 2010, late 2014 and early 2015. 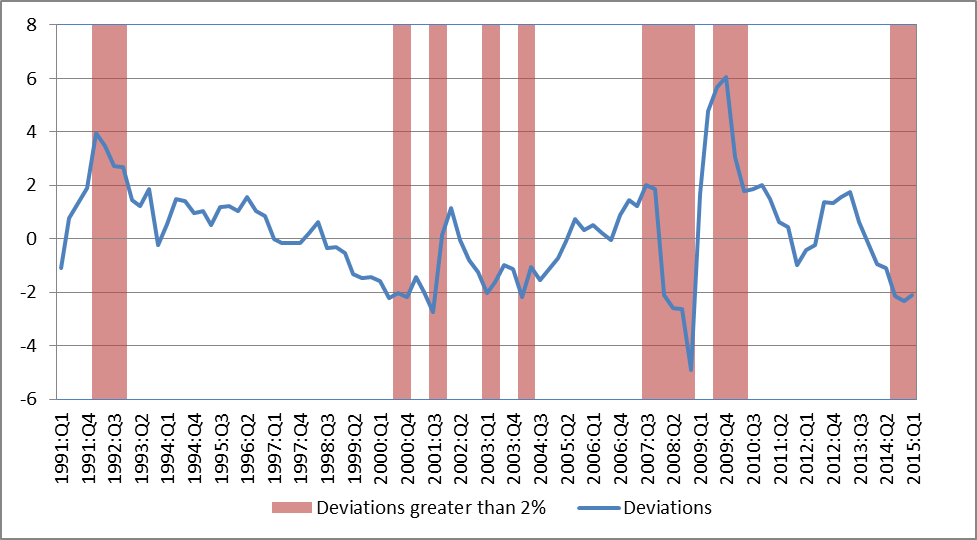 Most recently, Yellen (2015) argued that the fixed equilibrium real interest rate of two in the original Taylor rule should be replaced by a time-varying rate. We compute deviations using the original Taylor rule with the Laubach and Williams (2003) time-varying equilibrium real interest rate and PCE inflation as the Directive Policy rule. As shown in Figure 5, Fed policy since the end of the Great Recession is even more in accord with the proposed legislation than the Yellen (2012) specification, with no deviations greater than two percent from 2010 through early 2014. There were, however, deviations greater than two percent in 2003 – 2005, 2008 – 2009, and late 2014. While the Fed could have been in compliance with the FORM Act between 2000 and 2015, it would only have been by changing the Directive Policy Rule several times during the period. 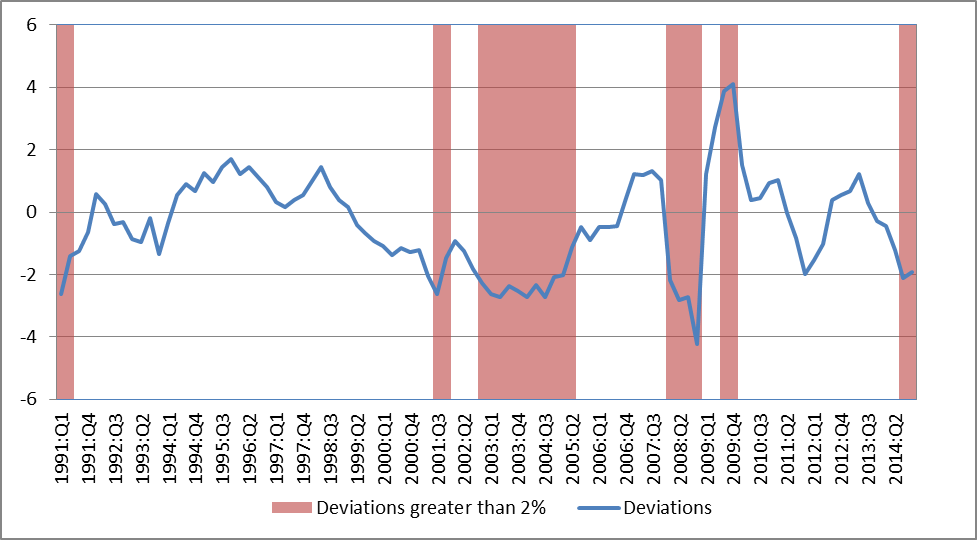 What are the implications of the FORM Act going forward? If a legislated policy rule did not alter Fed behavior, our results for the 2000s and 2010s lead us to believe that a rule which is designed to produce small current deviations may very well produce large future deviations which, in turn, would require changes in the rule for the Fed to remain in compliance. In that case, the legislation would increase transparency, but not affect policy. Alternatively, the desire to avoid too frequent changes in the rule may very well influence the Fed in the direction of sticking with their chosen rule. In this scenario, the FORM Act would, while neither specifying nor requiring adherence to a particular rule, increase the predictability of monetary policy.

Would increasing the predictability of monetary policy in this fashion be a positive or a negative development? If one believes that the Fed should operate under “constrained discretion” where it sets inflation and unemployment targets but does not specify a rule for the instruments of policy, the increased predictability would be undesirable. From our perspective, however, based on historical and statistical research showing that economic performance is better in rules-based than in discretionary eras, we believe that increased predictability would be a desirable outcome.