On Wednesday the Federal Reserve announced that it is increasing its target for the fed funds rate to a new range of 25 to 50 basis points (0.25% to 0.5% annual rate). How does the Fed plan to accomplish this, and what does it mean for other interest rates?

Instead of open-market operations, one of the key new tools of monetary policy is the interest rate that the Federal Reserve pays on deposits kept overnight on account with the Fed. This rate had been 25 basis points and was raised to 50 basis points on Wednesday. One’s first thought would be that this interest rate should put a floor under the fed funds rate. Why would I accept less than 25 basis points on a potentially risky loan to another bank when I could earn 25 basis points just by letting the funds sit idle in my Fed account without risk? But it’s clear that the system hasn’t worked that way. The average fed funds rate over the last two years has only been around 10 basis points, despite the 25 bp banks could earn just by sitting on the excess reserves. 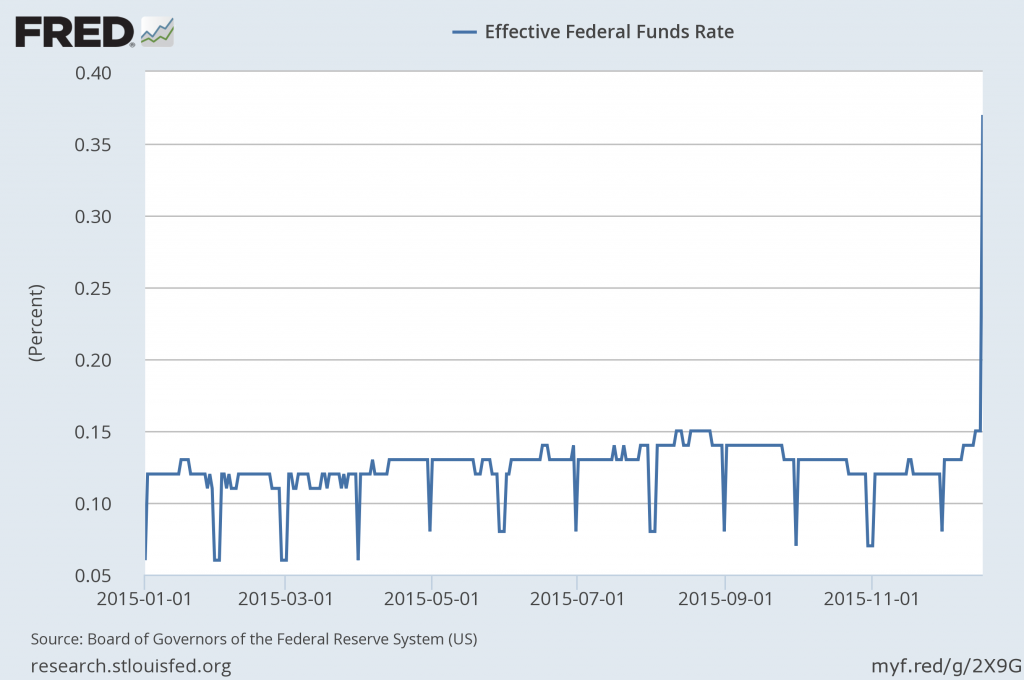 The explanation is that most of the institutions lending fed funds today are not conventional banks but instead are institutions like Federal Home Loan Banks that are not eligible to earn the 0.25% interest on excess reserves. Still, you’d think that any of the banks that are eligible would be happy to pay well more than 10 basis points to borrow as many Fed deposits as they could from the FHLB and then collect the 25 bp from the Fed. But the FHLB are picky about whom they’re willing to lend to, and as a result settle for well below what would be an unrestricted market rate. Incidentally, we also see very dramatically in the graph above an important monthly seasonal in these preferences. Many institutions are apparently doing something other than lending fed funds to their approved borrowers on every day except the last day of the month, the day when their monthly balance sheet gets reported. 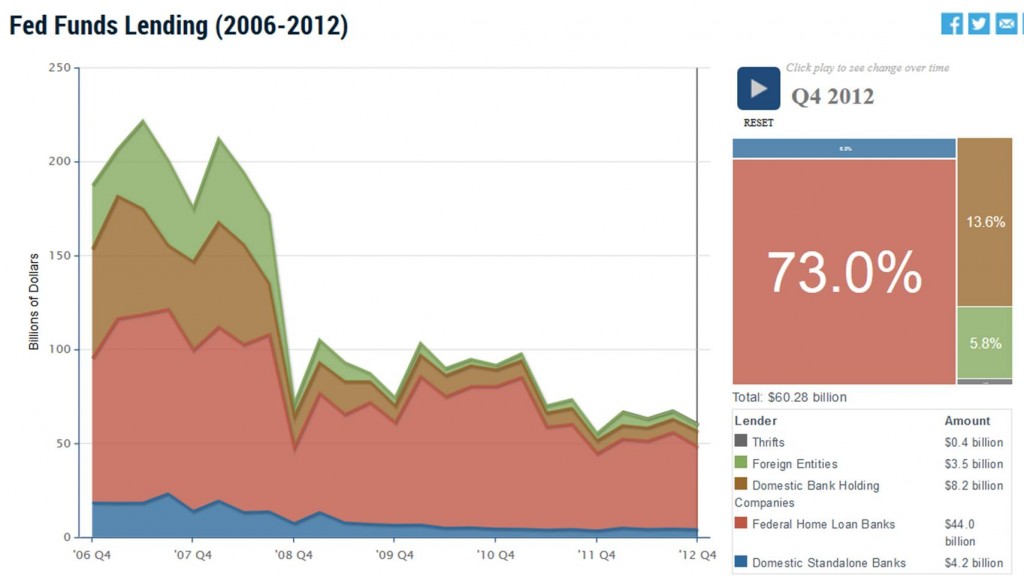 So in addition to raising the interest rate on reserves, the Fed announced Wednesday that it will offer to pay 25 basis points on reverse repurchase agreements to an expanded list of counterparties that includes the Home Loan Banks, Fannie, Freddie, and a host of money market funds. These are essentially overnight loans from the institutions to the Fed of up to $30 billion per institution which are collateralized by the Fed’s holdings of Treasury securities (the source of the “reverse repurchase agreement” designation). The Fed intends to keep the fed funds rate within a given target range (currently 25 to 50 basis points) by setting the interest on reserves to the upper end of the range (now 50 basis points) and the offer rate on reverse repos to the lower end (now 25 basis points).

Is it going to work? As seen in the first graph above, the changes certainly seemed quite effective on the first day of operation, with the average rate on fed funds loans jumping from 15 basis points on Wednesday to 37 bp on Thursday. But other interest rates actually fell on Thursday, with the yield on 3-month Treasuries falling from 27 to 23 bp and that on 10-year Treasuries falling from 2.30% to 2.24%. Was this some kind of perverse market reaction to the change?

The answer is not at all. Financial markets are forward looking. You can think of the interest rate on a 3-month Treasury bill as the expected average value of the overnight fed funds rate over the next 90 days minus a habitat premium representing investor preferences for Treasuries. That premium has recently been averaging around 7 bp. Wednesday’s move by the Fed caught no one by surprise. The Fed’s October 28 statement and statements by Fed officials in the following weeks made it pretty clear to everybody that December 16 was the lift-off date. And we saw the 3-month Treasury rate begin to rise at the end of October. The cumulative rise between October 23 and December 17 was 23 bp, consistent with the claim that the Fed has succeeded in raising the 3-month Treasury rate exactly as desired. That number is also consistent with the conclusion that nobody expects a further increase at the next FOMC meeting on January 27. The one uncertainty is where the fed funds rate will end up trading within the 25-50 bp range. If that same 7 bp premium holds over the next 3 months, Thursday’s 0.23% Tbill rate would be consistent with an average fed funds rate of 30 bp over the next 3 months. 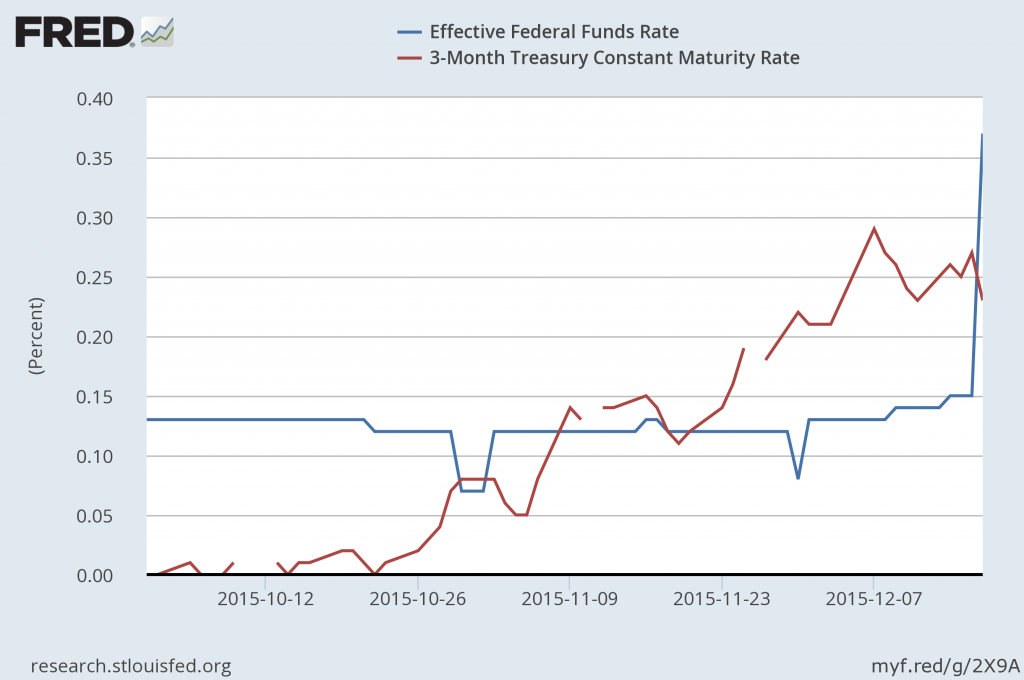 The rest of the yield curve also started climbing right along with the 3-month yield at the end of October. The 6-month rate is up 35 bp, and the 1-year up 45 bp. Once you get past about 3 months, risk premia start to become a factor in the Treasury yield curve– the yield is not simply an expectation of the average fed funds rate over the period minus some constant. Nonetheless, the change in yields since October is consistent with a second fed funds hike expected in the first half of 2016 and a third later in the year. 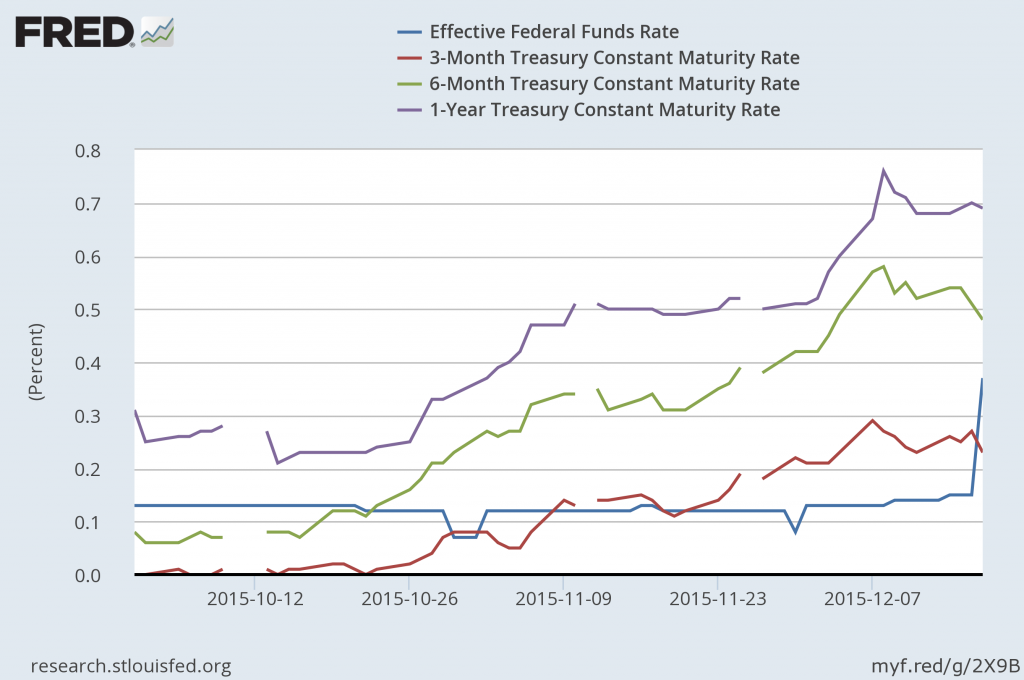 The 10-year yield (which in principle should reflect the entire future rate path over the next decade) is up about 25 basis points.

The Fed’s new tools give it the power to raise interest rates in the new environment. But they may be quite cautious about exercising that power in 2016.