Asia and China made disproportionate contributions to the slowdown of global trade growth in 2015. China’s import growth slowed starkly, driven by both external and domestic factors, including a rebalancing of demand. Econometric results point to weak investment and rebalancing as the main causes of the import slowdown. Spillover effects from China’s rebalancing are estimated for some 60 countries using value-added trade data, and are found to be more negative on Asia and commodity exporters than others.

As noted in the abstract, rebalancing toward consumption is proceeding apace, albeit perhaps not as fast as might be desired. This is shown in Figure 7 (Box 3) from the paper. 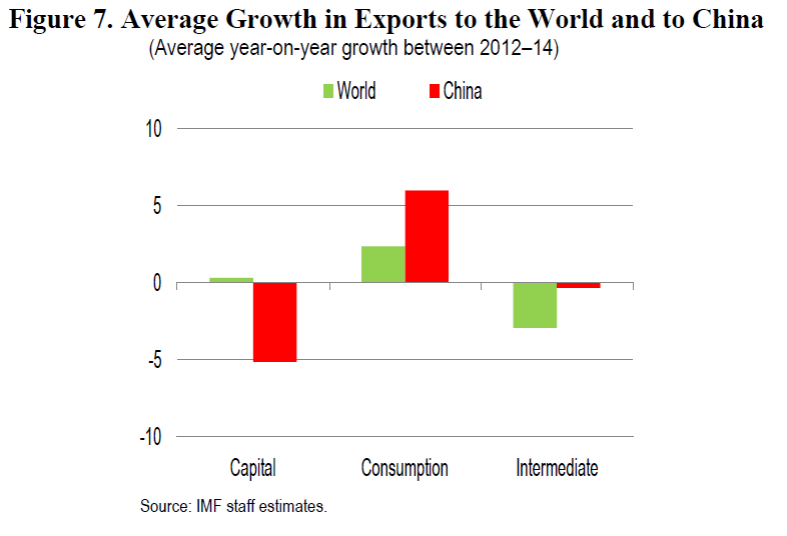 The slowdown in international trade is not a phenomenon specific; this point was highlighted in a recent FRB Richmond Focus by Jessie Romero, which asks the question “Why trade growth has slowed down — and what it might mean for the global economy?”.

after decades of rapid growth, trade suffered its greatest drop in the postwar era during 2008 and 2009, an episode known as the “Great Trade Collapse.” Today, growth rates are still well below the previous trend. The reasons for this sluggishness are unclear: Are there lingering effects from the global financial crisis and recession, or has some fundamental change occurred in the world economy?… 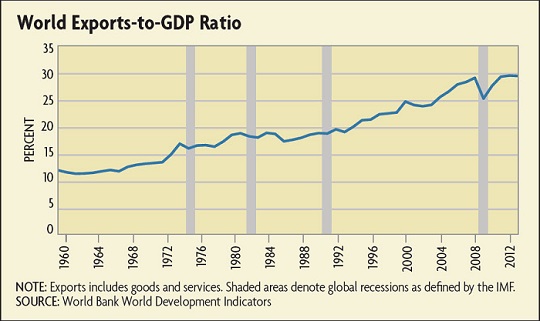 Early Warnings, and Anticipations of the Future

The concerns about the slowdown in trade are not new. Back in October, Bank Underground noted the slowdown, and through a different prism concluded:

Going forward, these results suggest world trade growth will remain subdued relative to pre-crisis averages. And the trade elasticity of global growth should not be expected to return to its pre-crisis level over the next few years for two reasons:

In a more recent Bank Underground post entitled “Bouncebackability of exports after the Great Trade Collapse of 2008/9”, John Lewis and Selien De Schryder argue that the slowdown, at least for many of the advanced economies, is temporary in nature. Here’s a graphical depiction of their forecast for this particular group: 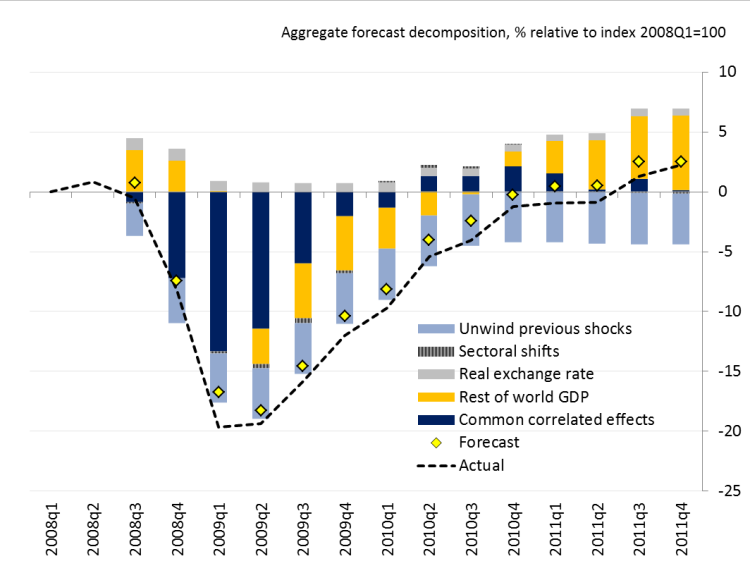 …the key result of interest is what happens in the subsequent recovery — actual exports recovered to a very similar level to what a pre-crisis model would have predicted. The contribution of common correlated effects dies away to virtually zero. In short, exports bounced back to exactly the level we would have expected given the outturn of GDP and the pre-crisis relationships between GDP and trade, which is evidence in favour of the “temporary shock” explanation.

More discussion in the VoxEU ebook, “The Global Trade Slowdown: A New Normal?”, released in June 2015 (discussed in this post).

1 thought on “The Trade Slowdown, China, and the Rest of the World”