Bryan Kelly at the University of Chicago, Hanno Lustig at Stanford and Stijn van Nieuwerburgh at NYU had an interesting paper in the June issue of American Economic Review that used option prices to measure the magnitude of the implicit U.S. government guarantee of the financial sector during 2007-2009.

A put option is an agreement you could make that you gives you the opportunity (if you choose to exercise it) to sell a security at some specified price and future time. If the agreed-upon price is well below the current price, you are basically buying insurance against a very big move down in the stock price. How much you pay for the option depends on the likelihood you and the counterparty place on the stock price going that low and on how much you value being insured against that contingency.

You could buy put options on a variety of securities, both individual stocks and indexes constructed from groups of stocks. The key observation motivating Kelly, Lustig, and van Nieuwerburgh’s paper is a divergence in 2007-2009 between the combined price of put options on individual financial-sector stocks and the price on options for an overall financial-sector index. During the Great Recession, you started to pay much more for a dollar of insurance against any individual financial stock going down than you would for a dollar of insurance against the whole sector going down. 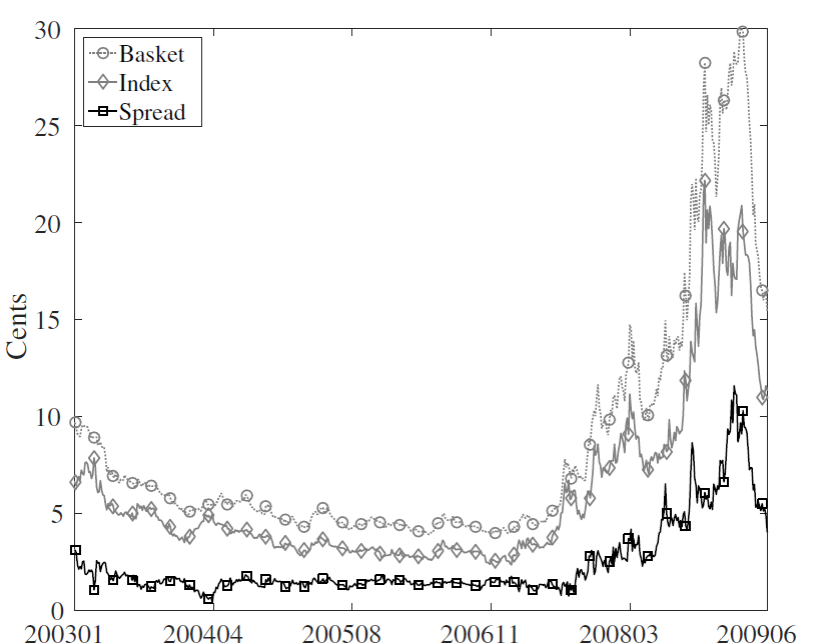 The cost of financial sector insurance based on 365-day put options (delta = -25%) on the index (solid gray line) and a basket of options on individual stocks (dotted gray line), as well as the basket-index spread (black line). Units are cents per dollar insured. Source: Kelly, Lustig, and van Nieuwerburgh (2016).

One possible explanation would be if firm-specific risks went up. But the correlation between financial-sector stocks increased rather than fell during this period. And we see no corresponding spread develop in the prices of call options (where I pay you for the option of buying at some future price). 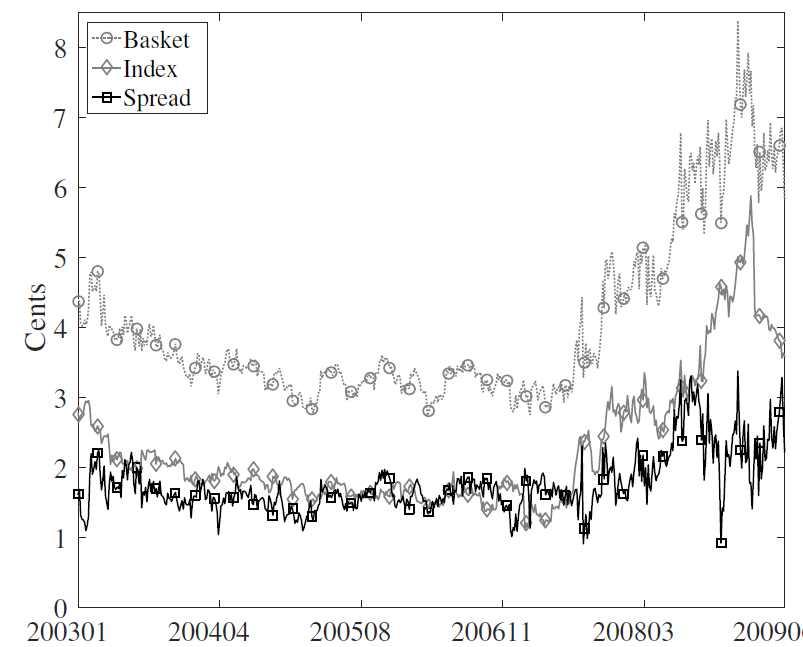 The cost of financial sector insurance based on 365-day call options (delta = +25%) on the index (solid gray line) and options on the basket (dotted gray line), as well as the basket-index spread (black line). Units are cents per dollar insured. Source: Kelly, Lustig, and van Nieuwerburgh (2016).

We also did not observe an analogous price spread between individual put options and sector-wide put options for nonfinancial stocks. 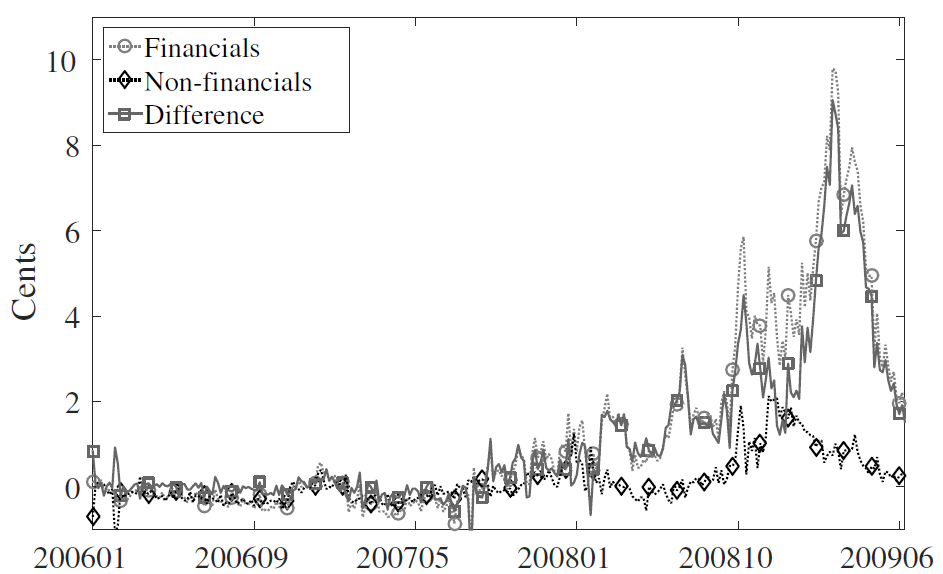 The authors examined a number of other possible factors, and concluded that the single most plausible explanation is that while the government may have been prepared to let individual banks suffer big losses, it stood ready to provide whatever assistance was necessary to prevent a big drop in the entire sector, a policy that some observers have referred to as the “Greenspan/Bernanke put”. The authors constructed an option-pricing model that incorporated this perception on the part of option traders which allowed them to estimate parameters of the perceived policy to be able to explain the observed option prices. They then used this model to ask, suppose there had been no government guarantee, but you wanted to buy an insurance policy covering the entire financial sector that would function the same way. They concluded that such a policy would have cost $282 billion. Here’s how the authors describe that number:

These estimates are admittedly coarse and derived from a highly stylized model, thus they are not to be interpreted as estimates with high statistical precision due to uncertainty about the correct model specification. Nonetheless they suggest meaningful effects of government guarantees on the value of equity and equity-linked securities.

There are those who claim that the government’s goal was to protect the banks. I do not share that view, and maintain that instead the government’s goal was to prevent collateral damage from a financial-sector collapse. The trade-off all along was to try to make sure that as much of the out-of-pocket costs as possible were paid by bank owners and management while minimizing collateral harm to the non-bank public. Whether we found the right way to balance those trade-offs is something that will still be debated.

But I think we can all agree that what the government did was a pretty big deal.

24 thoughts on “Too systemic to fail”