A year ago, the Federal Reserve decided to raise its target for the fed funds rate by 25 basis points above the floor of 0-0.25% at which we’d been stuck for 7 years. FOMC members indicated at the time that they were expecting to end 2016 at 1.4%, or four rate hikes during the last year. We started this December at 0.41%, and the first hike of 2016 didn’t come until last week. Now FOMC members say they are expecting to end 2017 at 1.4%, or three more hikes from here during the next year. The January 2018 fed funds futures contract is currently priced at 1.23%, suggesting that the market is buying into two, not three hikes during 2017.

The Fed has a long-run goal of seeing the inflation rate around 2%. In earlier decades, the big challenge was how to keep inflation from rising well above that target. But over the last 8 years, inflation has been coming in persistently below 2%, suggesting the Fed had room to try to stimulate the economy more without having undesirable consequences for inflation. During the last year inflation has been climbing but still remains well below 2%.

Expectations of future inflation implicit in the price of Treasury Inflation Protected Securities have also been stubbornly below 2%, though these too have moved up over the last year.

But the big question is whether there is still so much slack in the economy that more stimulus is called for. The unemployment rate fell to 4.6% in November, which brings it below the Congressional Budget Office’s current assessment that the long-run natural unemployment rate for the U.S. is 4.8%. The long period when the Fed looked in frustration at the unemployment rate as something it wanted to bring down may now be over.

I like the visual device that Federal Reserve Bank of Chicago President Charles Evans proposed, which summarizes the Fed’s inflation and unemployment objectives in terms of a target with a bull’s-eye. I’ve centered the bull’s-eye below assuming a long-run inflation target of 2% and a natural unemployment rate of 4.8%. We’d like to be as close to the center of the target as possible. The U.S. has been moving steadily toward that objective since 2009, though up until the November employment report both the inflation and the unemployment data were arguing for more stimulus. This month for the first time the inflation number calls for more stimulus while the unemployment number suggests we may need less. 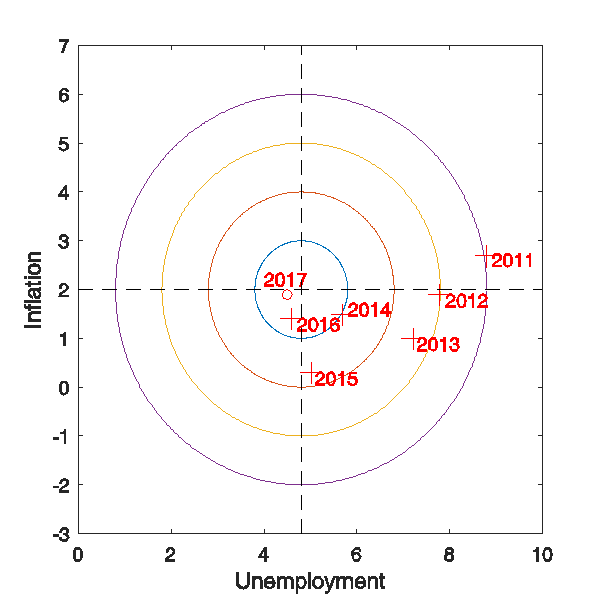 If you took the bulls-eye literally, on net you’d still want to see some additional stimulus today, bringing unemployment even lower until inflation is closer to target. And in fact the Fed sees enough underlying strength in the economy that it thinks that, even with the rate hike last week and additional hikes planned for next year, on balance they’re still providing a modest stimulus and expect that by the end of 2017 we’ll end up very close to target:

The stance of monetary policy remains accommodative, thereby supporting some further strengthening in labor market conditions and a return to 2 percent inflation.

Even if the Fed’s assessment of where we’ll be next year is correct, Paul Krugman thinks it may still be too early to start raising rates again:

Right now the economy looks OK, but things may change. Of course they could get better, but they could also get worse– and the costs of weakness are much greater than those of unexpected strength, because we won’t have a good policy response if it happens.

But the elephant in the room is of course the possibility that fiscal stimulus may soon be a factor pushing us in a northwest direction on that target. And that may soon come to play a bigger role in U.S. monetary policy determination.