Hard to argue the PBoC is manipulating the yuan to keep it weak, especially as capital controls are being tightened. But who listens to facts any more?

Reserves fell by $41bn, to $3.01tn, less than the expected $51bn drop according to a Reuters poll of analysts. In November reserves fell $70bn.

The lower than expected drop nonetheless showed that pressure on the renminbi continues, as many Chinese seek to get money out of the country.

Like previous months’, December’s fall in reserves was mainly accounted for by the central bank selling foreign currency to slow the renminbi’s decline, according to a statement by the State Administration of Foreign Exchange, which said that the central bank’s effort to stabilise the currency was the key reason for the fall in reserves in 2016 from $3.3tn to just above $3tn.

Starting in November the Chinese government began to impose new capital controls, including strict limits on large business deals abroad, in an effort to close off an avenue widely used to get money out of China.

While the yuan continues to decline against the USD, it’s important to keep in mind the overall strengthening of the dollar in recent months. Consequently, the yuan in real effective terms (the macroeconomically relevant measure) has stabilized. 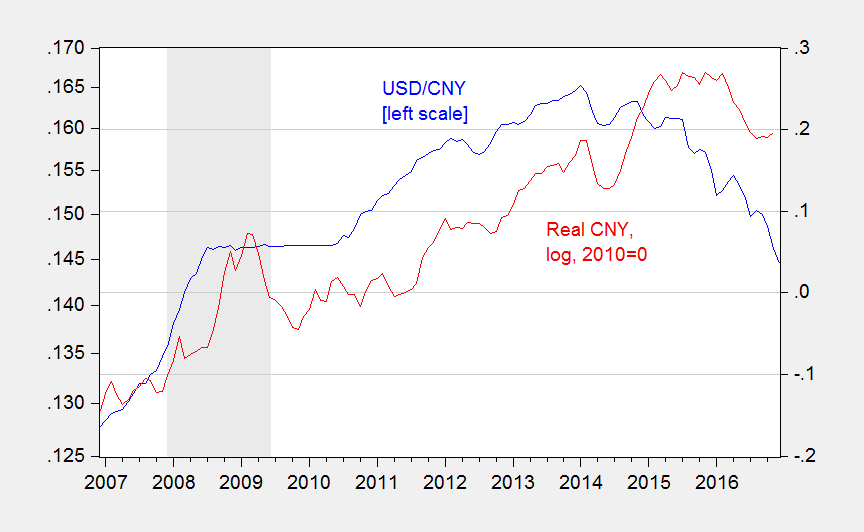 So, China’s reserves are decumulating, holdings of Treasurys likely falling, the CNY has stabilized in effective terms, and according to at least two measures CNY is no longer substantially undervalued.

Today, the US-China trade relationship actually supports roughly 2.6 million jobs in the United States across a range of industries, including jobs that Chinese companies have created in America. And as the Chinese middle class continues its rapid expansion over the next decade (the number of Chinese middle-class consumers will exceed the entire population of the United States by 2026), US companies face significant opportunities to tap into a new and lucrative customer base that can further boost employment and economic growth. Economic data show that nations trading closely with China outperform nations with less integrated trade ties, and we expect this trend to continue.

Examples of the benefits to the US economy from trade with China include: