Economists have had a lot of interest recently in whether uncertainty itself may have measurable effects on the economy. Last week I participated in a session devoted to economic research on this question at the meetings of the Allied Social Science Association in Chicago. Here I relate some of the comments I made there.

Economists usually describe the uncertainty of a random variable in terms of its variance, which is a measure of the dispersion of the possible outcomes. We often think of higher uncertainty as something that increases the variance without changing the mean, or average, outcome. Something very good may be about to happen, or something very bad, but I’m not sure which.

However, a more vernacular usage of the word “uncertainty” has pure negative connotations, referring to a higher probability that something bad may happen, without anything in the way of upside. One of the points I made in Chicago is that there is a mathematical sense in which this alternative interpretation of uncertainty could in fact be the reason that the variance as normally defined would increase.

I drew as an example on one mathematical description of economic recessions. Suppose that if we turn out to be in a recession next quarter, we could think of GDP growth in that case as coming from a Normal distribution with mean m1 and variance s2. For example, in historical data the average growth rate in recessions is m1 = -1% at an annual rate with a variance s2 around that mean of 10%. By contrast, the average growth rate in U.S. expansions was around m2 = +4%, with a variance around that mean likewise around 10%. We don’t know today whether we’re going to be in a recession next quarter or not. If there’s a probability p of being in recession, it’s not hard to show that the expected growth rate for next quarter is (p)(m1) + (1-p)(m2) (a weighted average of the two means) and that the variance around that expected growth is s2 + p(1-p)(m1 – m2)2. If we’re in a normal expansion right now, there’s only a p = 5% chance that we’ll go into recession next quarter, corresponding to a variance of 10 + (0.05)(0.95)(-1 – 4)2 = 11.2. The remote possibility of a recession in that case is contributing very little to the variance. An increase in s2 to say 15 would increase the variance of GDP growth from 11.2 to 16.2. This is the kind of pure uncertainty shock that economists often imagine, something that increases the dispersion in both expansions and recessions without changing the mean.

One measure of uncertainty that economists sometimes look at is the VIX, which is a measure of the square root of the variance of next month’s stock returns as inferred by the prices of stock options that will pay off if there is a big change up or down. From the above calculations, the VIX would be expected go up if either s2 increases or if the probability of recession gets closer to one-half. Here is a plot of the VIX, taken from an influential paper by Stanford economist Nicholas Bloom. As Johns Hopkins Professor Jonathan Wright, who was another discussant at the ASSA section, observed, the spikes up in the VIX correspond mainly to events that look very much like bad news and very little like pure dispersion shocks. Jonathan also noted that risk aversion by stock market participants might make the “bad news” element in a measure like the market-based VIX even stronger. 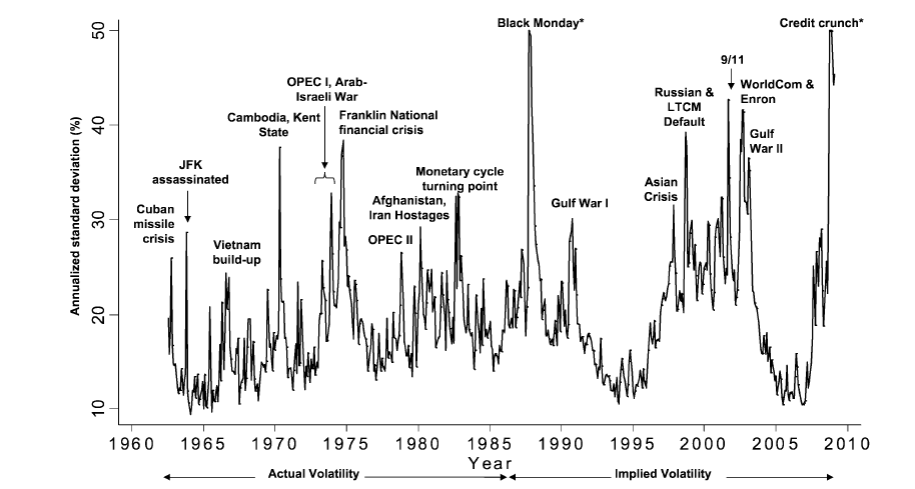 Another popular measure used by researchers is the Economic Policy Uncertainty Index developed by Scott Baker, Nicholas Bloom, and Stephen Davis. This is based on a scan of articles in leading newspapers looking for combinations of the following terms: (1) “uncertainty” or “uncertain”; (2) “economic” or “economy”; and (3) one of the following policy terms: “congress”, “deficit”, “Federal Reserve”, “legislation”, “regulation” or “white house”. Below is a graph of that index, in which I’ve made annotations for what seem to be some of the key developments. 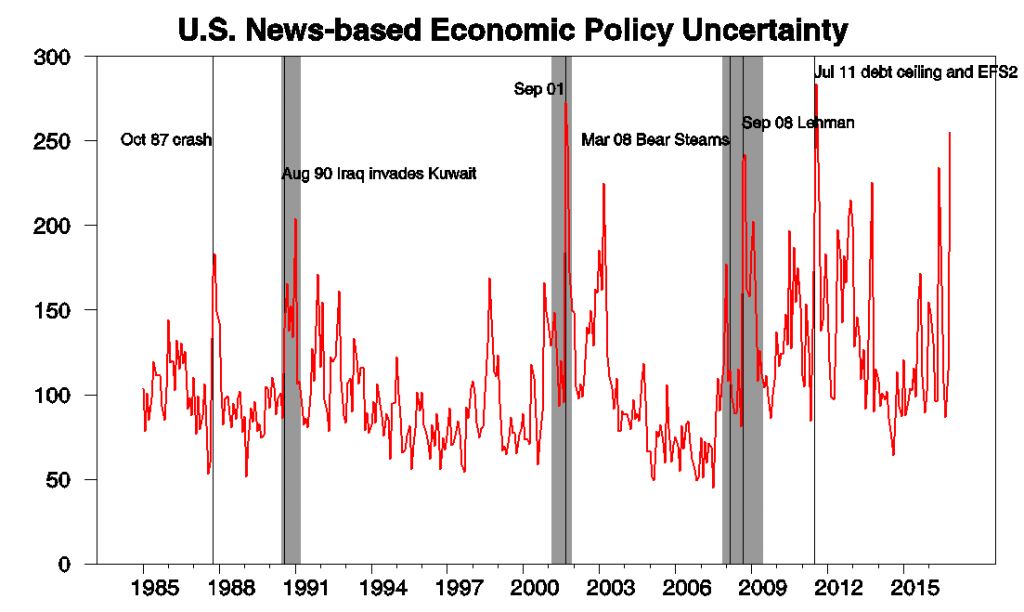 The first date that really stands out is October 1987, associated with the stock market crash. Nobody would have viewed that as an increased probability that either something good or something bad might happen. It was instead a pure increased probability of something bad, though those worries in that case turned out not to be realized. When Iraq invaded Kuwait in August 1990, that again was an event that increased the probability of something bad happening, and in this case something bad definitely did occur, with the spike in oil prices being one factor that likely contributed to the recession of 1990-91. September 11, 2001 was likewise a pure increase in the probability of bad things happening, as I would argue was also the case for the financial turmoil associated with the Great Recession. The one seemingly clean example of a pure “policy uncertainty shock” might be the debt-ceiling showdown in July 2011, in which Congress played with the idea that the U.S. might default on some debt obligations. This was surely a self-inflicted gunshot wound if there ever was one. Even so, we might have equally well labeled a key event of that month being the expansion of the European Financial Stability Facility, which was a response to the very real debt crises in Greece and other European countries. The subsequent grandstanding by U.S. politicians might be understood in part as a (completely misguided) response to the problems in Europe.

Here to me then is the most natural interpretation of the Economic Policy Uncertainty Index. At times there is a dramatic exogenous event that increases the probability that something bad will happen to the economy. Congress and the President talk about taking some kind of action in response, though nobody is sure what that response is going to be. It likewise is much less clear what course the Federal Reserve will take in response to the events. Sometimes something bad indeed does happen in the wake of those events, just as everyone feared, and despite whatever policy did or did not do. Even if we have a pure and exact measure of the object of interest– uncertainty about economic policy– it is not valid to conclude that policy uncertainty per se was the cause of the subsequent poor economic performance.

There is much recent research that tries to get at these questions in other ways. For example, Alfaro, Bloom, and Lin (2016) look at how firms differ in their exposure to different kinds of shocks such as energy prices, exchange rates, and economic policy and uses the cross-section along with time-series correlations to try to draw conclusions about the effects of uncertainty.

But even so, the case that a pure increase in uncertainty itself has significant economic effects, as distinct from some confusion about policy whenever there is an increased probability that something bad is about to happen to the real economy no matter what policy does, is far from settled.

6 thoughts on “Measuring the economic effects of uncertainty”