Can we fund the partly see-through wall by taxing worker remittances?

Given that tax reform cannot really force Mexico specifically to finance the wall/fence [0], it pays to see what other options are available. One option mentioned by President Trump on the campaign was to impose restrictions on worker remittances back to Mexico. 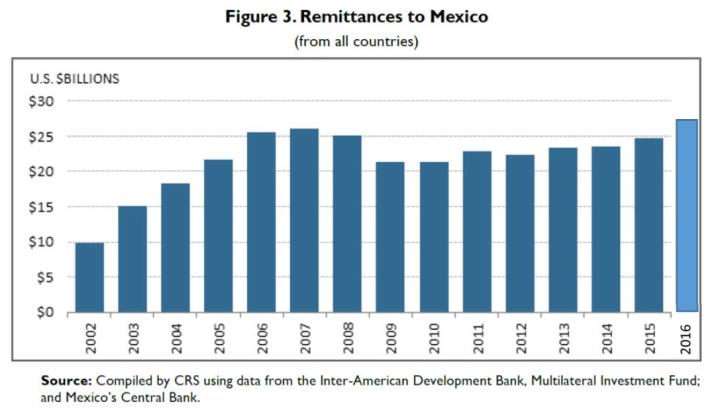 There are several reasons why remittance taxes are bad from a general efficiency and development context. However, in terms of the question at hand, here are two particularly salient concerns (from Mohopatra (2010)):

Armed with the relevant parameter, we can now proceed.

Estimates for the cost of building the wall range from $12 to $40 billlion [2]. This means that it will take some time — well, years — to fund the wall. Of course, there is a maintenance cost associated with the enhanced wall. For extensive details on walls/fences/maintenance costs, see CRS (2009).

Of course, I am not addressing the collateral damage associated with imposing capital controls –- for instance, how much will foreigners want to put their assets in the US if the Trump Administration is willing to impose capital controls (see impact on the Chinn-Ito index discussed here)?

Next part: A Tariff to Fund the Beautiful Wall/Fence

25 thoughts on “Paying for the Wall/Fence: Capital Controls Edition”