…[T]he time has come to develop a comprehensive approach to international monetary reform compatible with genuine free trade under free-market conditions. If markets are to function properly, money needs to convey accurate price signals; that won’t happen as long as governments can manipulate exchange rates.

As I noted yesterday, Dr. Shelton has advocated a gold standard as a path to achieve the goal of correctly valued exchange rates. However, Dr. Shelton does not back up her assertions with any empirical evidence, so I thought I would consult the literature for the answer. I’ll take a correctly valued exchange rate as an exchange rate where a composite good called a widget in one country trades one-for-one for that in another, a condition called purchasing power parity (PPP). Then, my question is whether purchasing power parity asserted more rapidly under the gold standard than under floating.

Some evidence is provided in Table 5 from Alan M. Taylor, “A Century of Purchasing Power Parity”: 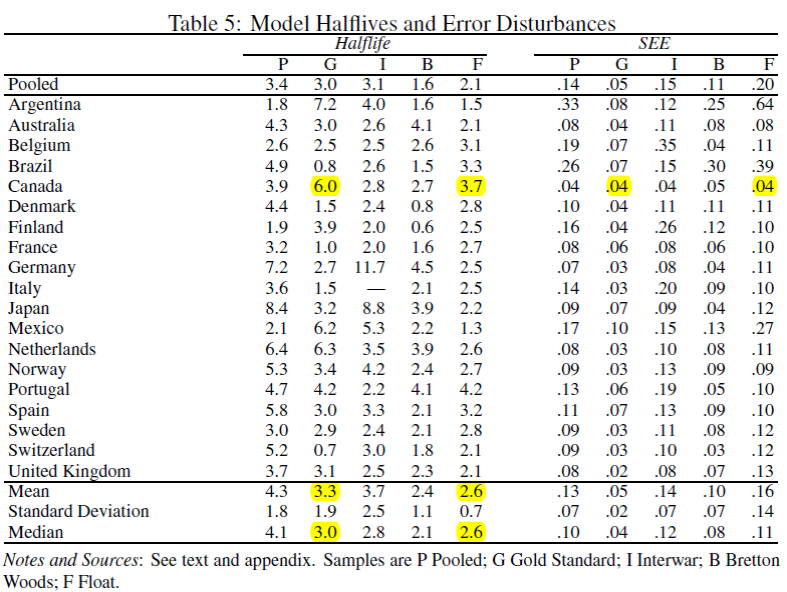 Notice that the average(median) half life of a PPP deviation under the gold standard (G) is 3.3(3.0) years, and 2.6(2.6) years under the floating rate period. The half-lives are noticeably longer for some of the periphery countries of the Gold standard era, e.g, Canada 6.7 years vs. 3.7 years during the float. In that case, since the stochastic shock is the same 0.4 in two periods, then the variance around mean is larger during the Gold standard. (Standard deviations of first differences are in Table 6 of the paper.)

In other words, while variance of PPP deviations might be smaller under the Gold standard than the post-Bretton Woods float, there’s no guarantee, and the deviations from PPP might be more long-lived.

1 thought on “Would a Gold Standard Result in Fast Adjustment to Parity?”