The Administration rolled out a new trade strategy yesterday (The President’s 2017 Trade Policy Agenda, part of this document). Like many things the Administration has put forward, it is heavy on rhetoric, light on policy specifics. That being said, if the Administration pursues a trade agenda that invites trade retaliation, while implementation of stimulative macro policies (e.g., infrastructure investment, tax cuts) are delayed, then we may very well get an economic slowdown before a boom.

“It is time for a more aggressive approach. The Trump Administration will use all possible leverage to encourage other countries to give U.S. producers fair, reciprocal access to their markets…”

The new trade approach, which was sent to Congress Wednesday, could affect businesses and consumers worldwide, with the White House suggesting the United States could unilaterally impose tariffs against countries it thinks have unfair trade practices — paving the way for a more adversarial relationship with China and other trading partners — and punish companies that relocate overseas and then attempt to sell products on the U.S. market.

Trump’s threatened tariffs and other trade barriers could violate WTO rules and bring blowback from other countries in the trade organization. But the agenda signals the Trump administration could simply ignore those complaints.

Chad Bown, a senior fellow at the Peterson Institute for International Economics, said he fears the administration’s criticism of WTO rules could end up creating a more lawless global system. “The difficulty is, once we step away from that and say the WTO rules imply a lot more flexibility in what we’re allowed to do, we can be 100 percent certain other countries will start to do the same. That’s what will ultimately undermine the U.S. system, and there will be big repercussions for U.S. exporters.”

So retaliation is a distinct possibility. The amount of the potentially authorized retaliation against the U.S. is not trivial. From Mericle and Phillips, “US Daily: Trade Disputes: What Happens When You Break the Rules?” Goldman Sachs, February 17, 2017 (not online): 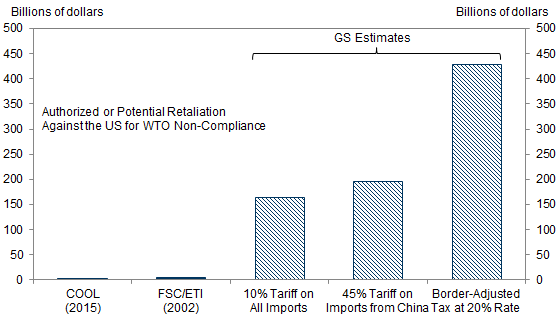 Exhibit 3 A WTO Case against Recent US Trade Policy Proposals Would Likely Be Unprecedented in Size. Source: Mericle and Phillips, “US Daily: Trade Disputes: What Happens When You Break the Rules?” Goldman Sachs, February 17, 2017 (not online), based on data from World Trade Organization, Goldman Sachs Global Investment Research.

Frankly, I didn’t even contemplate the fact that the amounts could be so large…

From the GS Note:

How such a scenario would play out is extremely uncertain. But in light of the magnitude of the potential violation, the likelihood that a WTO case would be lengthy, the fact that authorized penalties would not be retroactive, and the domestic political pressures that would quickly mount, press reports suggesting that the EU, Mexico, and China would likely respond quickly are unsurprising. It is difficult to know how President Trump might react to an adverse ruling from the WTO, an organization he has called a “disaster,” or to foreign retaliation. But reversing a large tariff, let alone a fundamental corporate tax reform, would be difficult politically, raising a risk of escalation that could undermine current multilateral trade agreements.

By the way, I have not discussed the macroeconomic impact of a full-fledged trade war (see here). Here’s a depiction of the impact on employment, state-by-state. 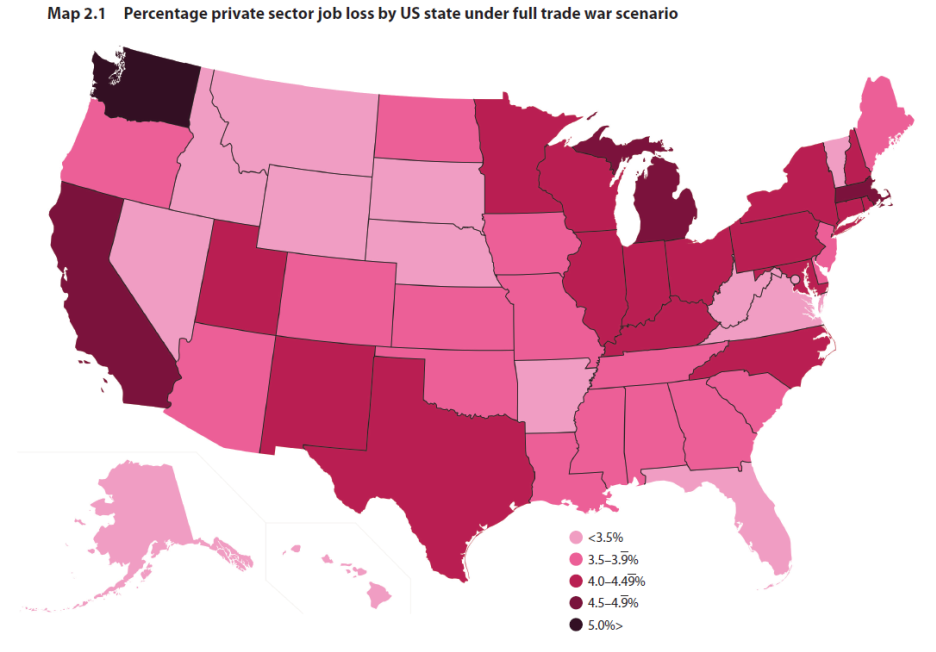 And, for all those people who bemoaned policy uncertainty as slowing down economic growth, over the past eight years, something to consider — again from WaPo:

“All those things together create a system where the U.S. government may intervene in arbitrary and unpredictable ways in trade relationships, and I don’t think that kind of framework is very helpful for the creation of lasting, worthwhile relationships between firms in the U.S. and firms abroad,” he said. “It just makes the business environment more uncertain.”

Here is the Baker, Bloom and Davis measure of global economic policy uncertainty through January 2017. 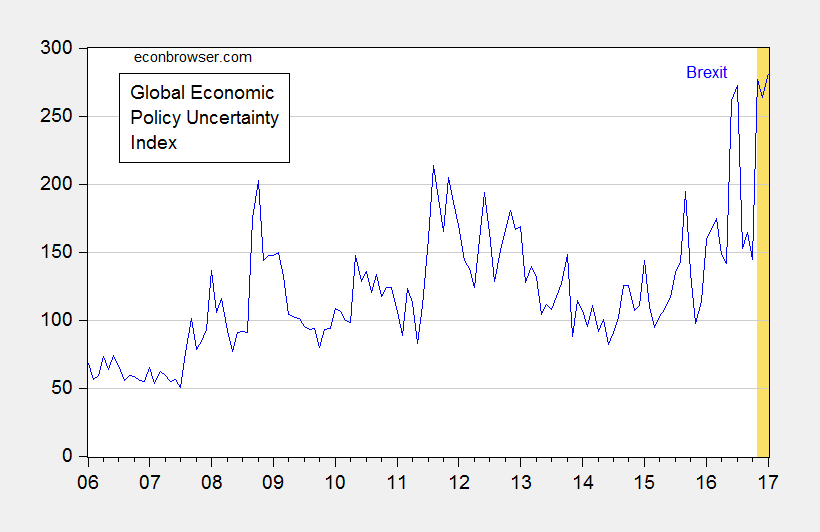 So, I’m sure there is something satisfying to some people about threatening our trading partners. It might all work out very well for the U.S. (we are a large country in international trade, so we can certainly pressure our partners effectively). But then it might not.

Those who wonder where the title of this post comes from, let me refer the reader to this article. It is important to remember the question is posed twice in the movie, with two different outcomes. In the second event, the person does indeed feel “lucky”, with the person in question consequently experiencing a sub-optimal outcome.