The national-security argument that trade deficits matter begins with this accounting identity: Any deficit in the current account caused by imbalanced trade must be offset by a surplus in the capital account, meaning foreign investment in the U.S.

… running large and persistent trade deficits also facilitates a pattern of wealth transfers offshore. Warren Buffett refers to this as “conquest by purchase” and warns that foreigners will eventually own so much of the U.S. that Americans will wind up working longer hours just to eat and to service the debt.

I’ve made a similar argument before, particularly in the context of how the current account deficits of the mid-2000’s were driven by the tax cuts and unfunded wars (and hence budget deficits) of the G.W. Bush Administrations [1]. However, there is an important caveat — and that is that the net international investment position does not move in lockstep with the cumulative current account imbalance. This is shown in this Figure reproduced from Brad Setser: 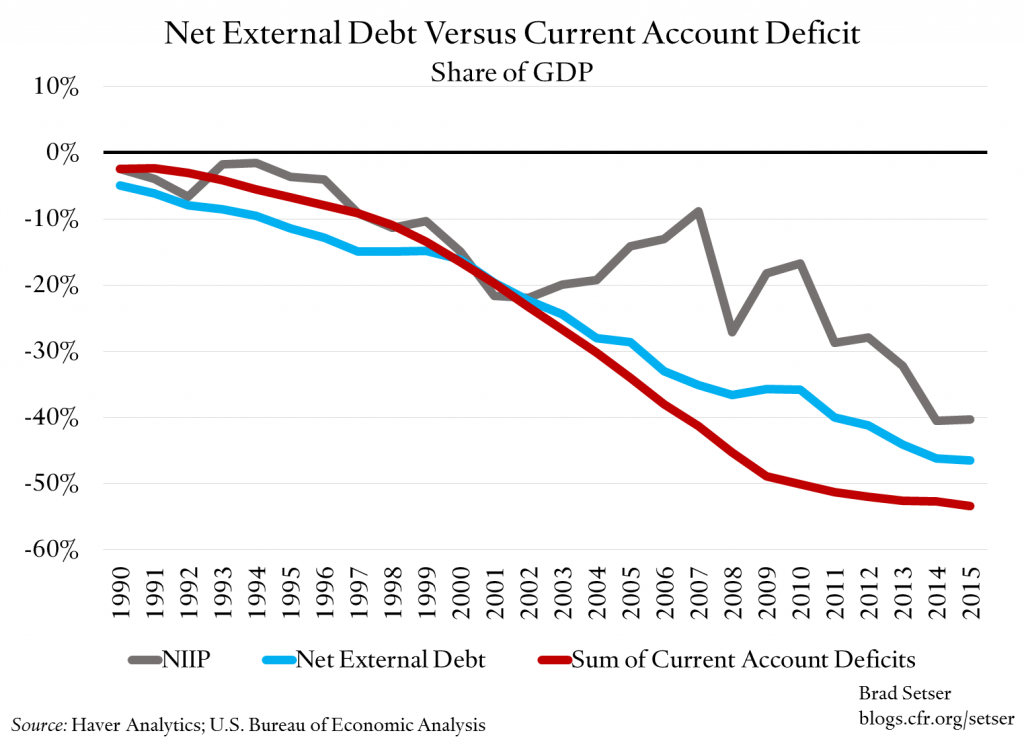 The gap is driven by various factors, including exchange rate changes, but also valuation changes of FDI. So far, the gap has amounted to a not-inconsequential 10% of GDP as of 2015.

None of this should be taken to mean that we shouldn’t be concerned about the deteriorating net international investment position. However, changes in relative prices of imports and exports by virtue of tariffs against specific countries are unlikely to change the current account balance, which is largely driven by private saving vs. investment flows, and the government’s net saving (i.e., inverse of budget deficits). My guess is that a CBO score of the President’s budget — when it comes out — is unlikely to show a reduction in the full employment budget balance.

If I were thinking about national security, I might be more concerned about the destabilizing impact of aggressive trade actions on our allies’ economies (including those of Mexico and the NATO nations).