Today we are pleased to present a guest contribution written by Maurizio Michael Habib, Elitza Mileva and Livio Stracca. The views expressed belong to the authors and are not necessarily shared by the institutions to which the authors are affiliated.

Does depreciation spur growth? The answer really depends on whom you ask this question. Whereas laymen and politicians are often convinced that depreciation does spur growth, economists are generally sceptical that the relative price of two currencies may play a fundamental role in the medium term. For most economists, the exchange rate is an endogenous variable, whose contribution to growth may be difficult to single out.

Dani Rodrik (2008) made an attempt to support the widespread view of non-economists that the level of the exchange rate matters for growth, especially for developing countries. Aghion et al. (2009) argued that it is the volatility of the exchange rate and the level of financial development that matter. However, both studies struggle to find a convincing way to deal with the endogeneity — in plain words, the inability of econometrics to identify what causes what — of exchange rates and growth. As a matter of fact, the question on whether engineering an exchange rate undervaluation helps medium-term growth is still surprisingly unsettled in the literature.

In a recently published paper, “The Real Exchange Rate and Economic Growth: Revisiting the Case Using External Instruments”, we take a fresh look at this question [working paper]. Its main contribution is in the identification strategy based on Instrumental Variables (IV). We aim at identifying exogenous movements in the real exchange rate, i.e. not driven by country-specific growth shocks, such as productivity shocks. The identification is based on a simple strategy. We argue that gyrations in world capital flows should be largely independent of individual country fundamentals, i.e. represent a push factor for most or all countries (the United States may be an exception and it is excluded from the analysis). They should therefore represent a source of variation in real exchange rates in countries that are more exposed to them, i.e. the countries that are more financially open, which we measure with the <de jure indicator of Menzie Chinn and Hiro Ito. One important caveat is that shifts in capital flows may affect economic growth directly, for example by changing credit availability conditions and, for this reason, in our analysis we also control for net capital inflows.

Armed with this identification strategy, we estimate the effect of real exchange rate movements on growth on a large panel of close to 150 countries over a sample of five-year periods from 1970 to 2010, uncovering three important results: 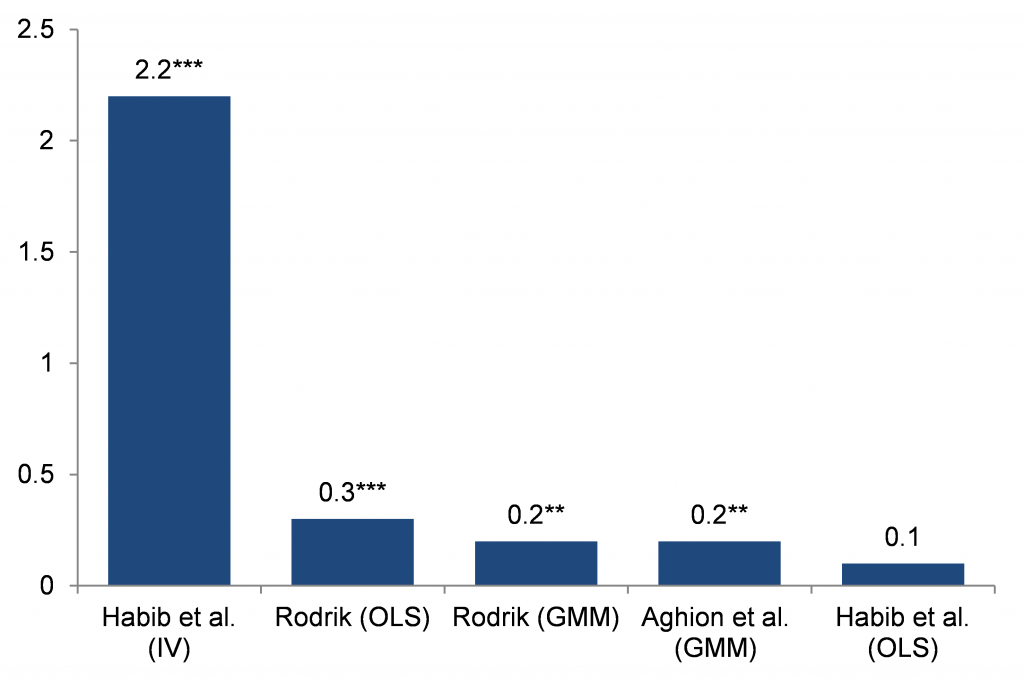 Figure 1: Impact of depreciation on average annual growth (over 5-year period). Notes: ***,**,* indicate statistical significance at the 1, 5, 10 per cent level. Ordinary Least Squares (OLS), Generalized Method of Moments (GMM), Instrumental Variables (IV). The depreciation is measured as a deviation of the real exchange rate from an implicit equilibrium level.

Our main conclusion is that using the exchange rate as a policy lever could be beneficial in the early stages of economic development, while it becomes irrelevant in the long term as countries become richer. However, our results should also not been seen as an encouragement for developing countries to rush to depreciate their currencies. In fact, it is not evident what type of exchange rate regime a developing country should adopt to maintain a relatively weak exchange rate in order to foster growth. By pegging their currency, for example, countries may temporarily benefit from devaluations but pay a price in terms of slower growth in case of appreciations of the base currency. Our results are therefore more relevant to understand the reasons why governments may pay attention to exchange rates, rather than a prescription for targeting exchange rates in developing countries.