Mix together the dashing of great (plutocratically oriented tax cut) expectations, the complete absence of any plan for infrastructure spending, and mix in some risk, and one gets this:

Here is a picture of the VIX over the past few months: 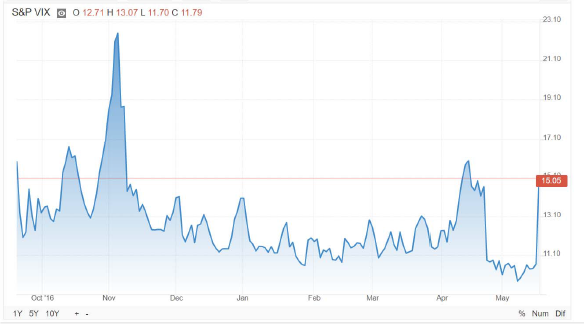 From stocks to bonds to the U.S. dollar, a bevy of trades that have been fashionable since Trump’s election last November, were getting dialed back or in some cases shredded as his reform agenda looked increasingly vulnerable amid the fallout from his firing last week of James Comey, the director of the Federal Bureau of Investigation.

The uncertainty about Trump’s future increased in the last 24 hours over allegations Trump had sought to end Comey’s investigation into ties between the president’s first national security adviser, Michael Flynn, and Russia, and even some Republicans were now calling for a deeper probe into possible obstruction of justice.

The result was the harshest sell off yet in U.S. stocks since Trump was elected and a jettisoning of positions that were tied to the notion that his policies would stoke economic growth and inflation.

“The Trump Trade is over as of today,” Ross Gerber, co-founder and CEO of Gerber Kawasaki Wealth and Investment Management, who said they have been selling for the past 45 days and continued to be bearish on risky assets today. “We’ve seen cracks all year, but today, this is the first institutional selling we are seeing.”

Indeed, some “Trump trades” have been unwinding for weeks, especially in the bond and currency markets where bets on inflation risks and economic growth prospects are most prevalent.

Interestingly, all this political uncertainty has not manifested itself in the BBD daily index of economic policy uncertainty.

Appropriately, I’m at this conference on modeling exchange rates today.

41 thoughts on “Is the Trump Dollar Rally Over?”