Today the Federal Reserve announced that it is increasing its target for the fed funds rate to a new range of 1 to 1.25%, a development that surprised no one. But something that was not heralded in advance was the announcement that the Fed intends to “begin implementing a balance sheet normalization program this year, provided that the economy evolves broadly as anticipated.” The Fed spelled out in detail exactly what that will entail. Sometime later this year, the Fed will begin limiting the amount of maturing Treasury securities and mortgage-backed securities that it reinvests, initially bringing its balance sheet down by $10 billion each month as its holdings are redeemed. Those amounts will gradually increase each month until after a year balance-sheet reduction reaches a pace of $50 billion per month. That compares with a net increase of $100B/month on the way up during QE1. Given current Fed security holdings of $4.2 trillion, this would reduce the Fed’s security holdings by about 14% per year once it gets into full swing.

So far, nothing has actually changed on the Fed’s balance sheet– the Fed just announced that it will likely do something later this year. However, much of the evidence for the effects of the Fed’s initial program of increasing the size of its balance sheet is based on how interest rates responded when various announcements were first made. We often saw that when the Fed announced a plan to buy more securities, the interest rate on 10-year Treasuries fell, consistent with the view that the large-scale asset purchases were succeeding in their goal of bringing interest rates down. Yesterday’s announcement gives us one more data point to add to that set of observations. So how much did interest rates go up when the Fed announced its plans to start selling?

Here’s what happened to the yield on 10-year Treasuries as measured by the TNX contract on the Chicago Board Options Exchange (divide by 10 to translate into the annual interest rate in percentage points). Rather than go up, the 10-year yield actually fell 6 basis points today. 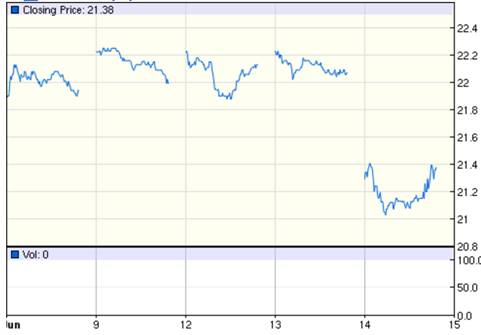 However, that drop all came on the market opening, before the Fed had announced anything. The Fed’s announcement wasn’t the only factor driving interest rates today. At 8:30 a.m. EDT this morning the Census reported that retail sales fell 0.3% in May, which presumably was the driving factor behind the day-over-day change in the 10-year rate. Typically researchers want to distinguish the effects of Fed policy from other influences. For this reason, the event-studies literature has increasingly looked at shorter time windows around the moment of the announcement, on the premise that within 15 or 30 minutes of the Fed’s announcement, monetary policy could reasonably be viewed as the most important factor. Here’s a look at what happened minute-by-minute today. 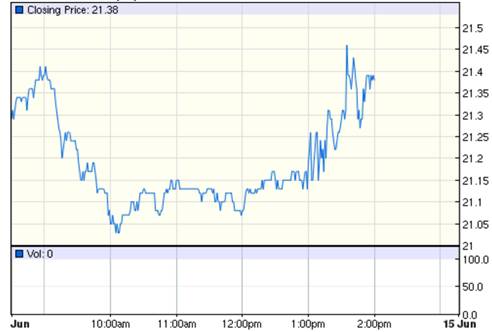 Which might be taken as a case study in the potential perils of the event-study methodology. But however you read it, today’s evidence seems to reinforce the conclusion that many of have drawn about the effects of the Fed’s large-scale asset purchases– whatever effects these may have had on long-term interest rates were likely less important than other fundamentals. That appeared to be the case on the way to building up the Fed’s balance sheet, and so far appears to be the case in the long process of bringing the balance sheet back down.

44 thoughts on “Fed balance-sheet reduction not scaring anyone”