Today we are pleased to present a guest contribution written by Geoffrey Williams, Assistant Professor at Transylvania University.

The Financial Crisis of 2008 and earlier emerging market crises of the 1990s have encouraged a resurgence of research interest in financial fragility. Out of this work has come a greater appreciation for a number of stylized facts. In particular, researchers have started to appreciate just how ubiquitous financial crises have been, outside of the mid-20th century “Quiet Period” (Reinhart and Rogoff, 2009; Gorton, 2012). Additionally, there is growing awareness of the role of rapid large scale international capital flows in advance of a crisis, sometimes termed a “capital flow bonanza” (Reinhard and Rogoff present a short discussion of this on pages 157-158; I also found Chinn and Kletzer, 2000, extremely helpful in thinking about this issue).

In a current working paper, I argue that the Panic of 1837 was fundamentally caused by just such a “bonanza.”

While much ink and many pixels have been spilt describing the fascinating issues of the Jacksonian economy (a very short list of published work would include Temin, 1969; Rousseau, 2002 and Knodell, 2006), I believe the most salient fact is that lending in the United States was extremely high in the mid-1830s. Relative to economic activity it was at a high not seen again until the late 1800s, or, arguably, ever. Peter Temin persuasively argued that this increase in lending was driven by a large flow of specie into the United States – roughly $50 million from 1833 to 1837.

I argue that the specie flows into the United States can be traced back to the launch of joint stock banking across the United Kingdom. Legislation in 1826 and 1833 led to the founding of many new joint stock banks in the 1830s (previously most UK banks had been private with a limit of six partners). Coincident with this increase in joint stock banks we see the supply of credit via bills of exchange increase by 10 million pounds, or $50 million.

In the Lancashire region the new banks lent widely, including to local cotton spinners, who increased spending on raw cotton in the mid-1830s by, you guessed it, 10 million pounds or $50 million. 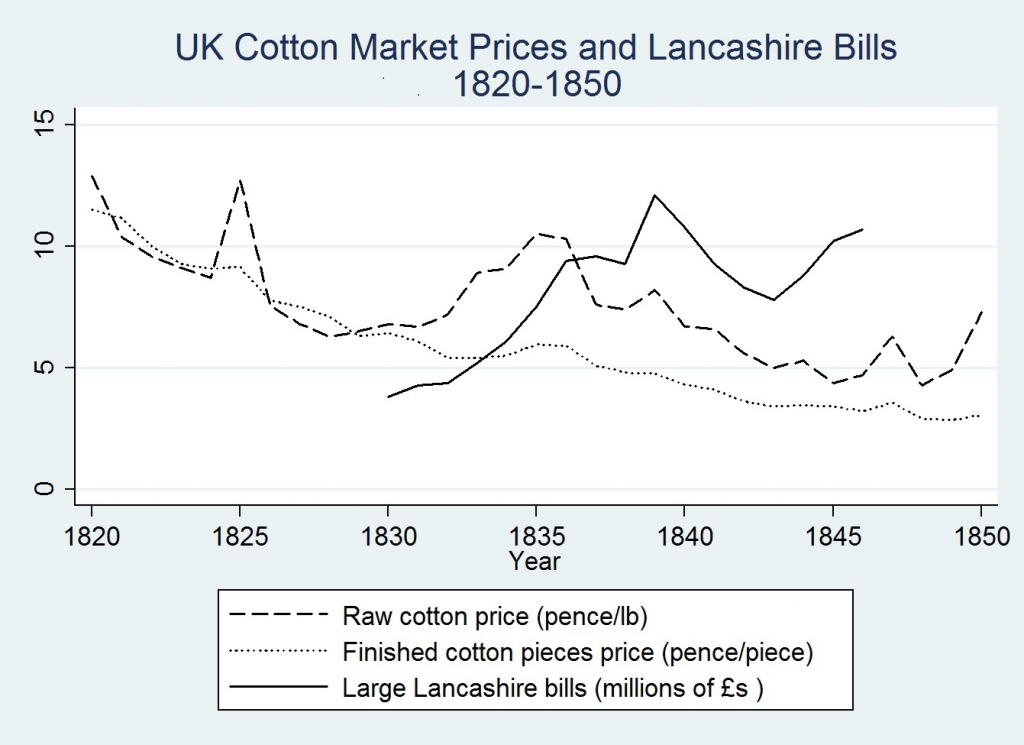 Since cotton was usually purchased on credit, this spending immediately flowed towards plantation owners in the Cotton South of the United States. Combined with other capital flows it became part of a larger “capital flow bonanza.” 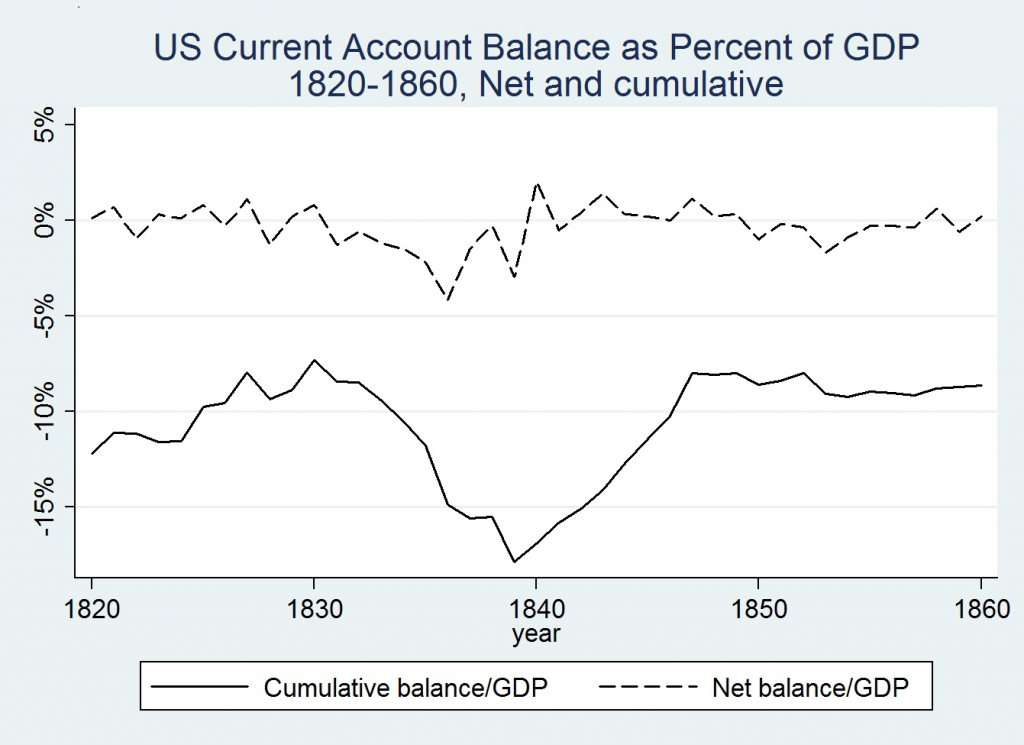 The increase in trade credit led to specie accumulation centered around the Cotton South. While banks across the entire United States showed an increase in specie and loans, Louisiana, followed by Mississippi and Alabama, showed the most dramatic growth. By 1836 Louisiana banks in aggregate had more than double the loans and specie reserves of banks in even the most developed coastal states. 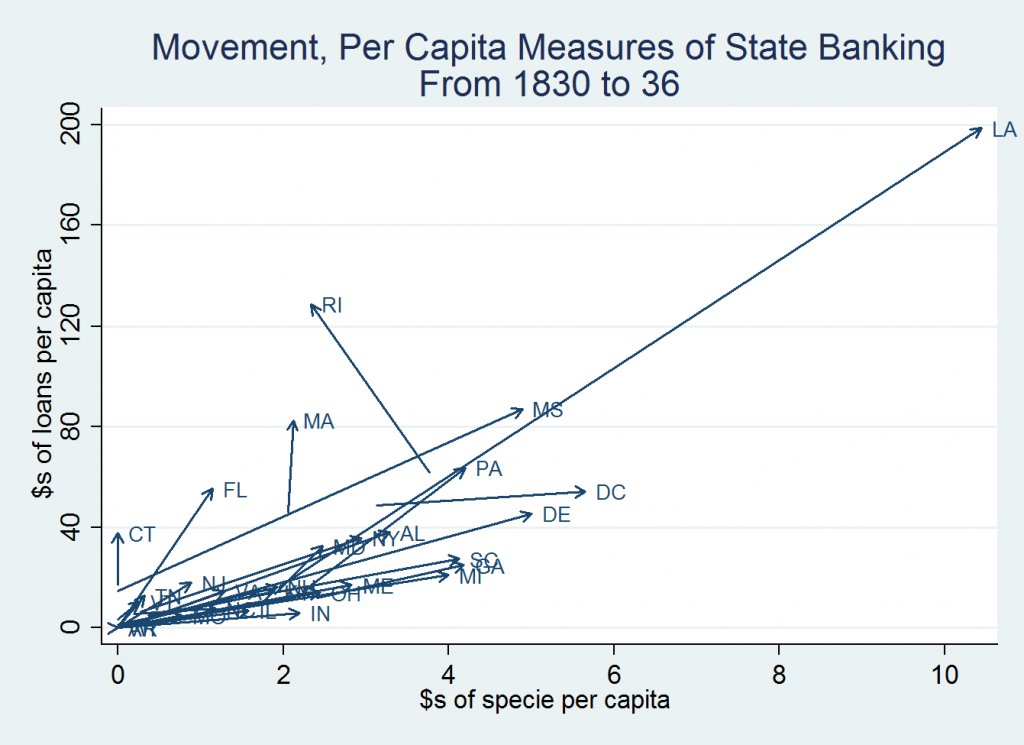 By the summer of 1836 the credit expansion had become unsustainable. Since the major trade credit instrument of the day, the bill of exchange, had a maturity of 60 to 90 days, we can track the collapse of trust as it moves from one link in the chain to the next over the next 10 months. The Bank of England increased its bank rate on July 21 and again on September 1st and credit began to tighten. In November of 1836 the Northern and Central Bank, headquartered in Manchester, pleaded for an emergency loan from the Bank of England. By March of 1837 there was concern about the “American Houses” involved in trade between the UK and US, bankers and merchants in Liverpool were expecting a panic and a major New Orleans cotton factor had failed. By April banks in New Orleans were adopting emergency measures and in May banks in New York City suspended specie payments, followed by banks across the United States. Financial instability continued, with a second Panic taking place in 1839.

Just as the 2008 crisis was followed by a deep recession, evidence suggests that the crises of the late 1830s hit the United States economy quite hard. Robert (2012) presents an interesting review of the problems it caused for the next decade, and how long it took for there to be recovery. It is not clear what helpful lessons were learned from the Panic by scholars and policymakers; hopefully we are learning more from the Crisis of 2008.