Today, we present a guest post written by Jeffrey Frankel, Harpel Professor at Harvard’s Kennedy School of Government, and formerly a member of the White House Council of Economic Advisers. A shorter version appeared in Project Syndicate on September 25th.

During most of 2017, the VIX — the Volatility Index on The Chicago Board Options Exchange — has been at the lowest levels of the last ten years. It recently dipped below 9, even lower than March 2007, just before the sub-prime mortgage crisis. It looks as though, once again, investors do not sufficiently appreciate how risky the world is today.

Known colloquially as the “fear index,” the VIX measures financial markets’ sensitivity to uncertainty, in the form of the perceived probability of large changes in the stock market. It is inferred from the prices of option on the stock exchange (which pay off only when stock prices rise or fall a lot). The low VIX this year signals that we are in another “risk on” environment, when investors move out of treasury bills and other safe haven assets and instead “reach for yield” by moving into riskier assets like stocks, corporate bonds, real estate, and carry-trade currencies.

One need not rely exclusively on the VIX to see that the markets are treating the current period more as a risk-on opportunity than risk-off. The returns on safe-haven assets were generally lower than the returns among risk-on assets in the first half of the year. On the one hand, the Swiss franc depreciated. On the other hand, the Australian dollar and Chinese yuan appreciated. And the stock market has hit record highs.

Why do I presume to second-guess the judgment of the VIX that true risk is low? One can think of an unusually long list of major possible risks. Each of them individually may have a low probability of happening in a given month, but cumulatively they imply a worrisome probability that at least one will happen sometime over the next few years: 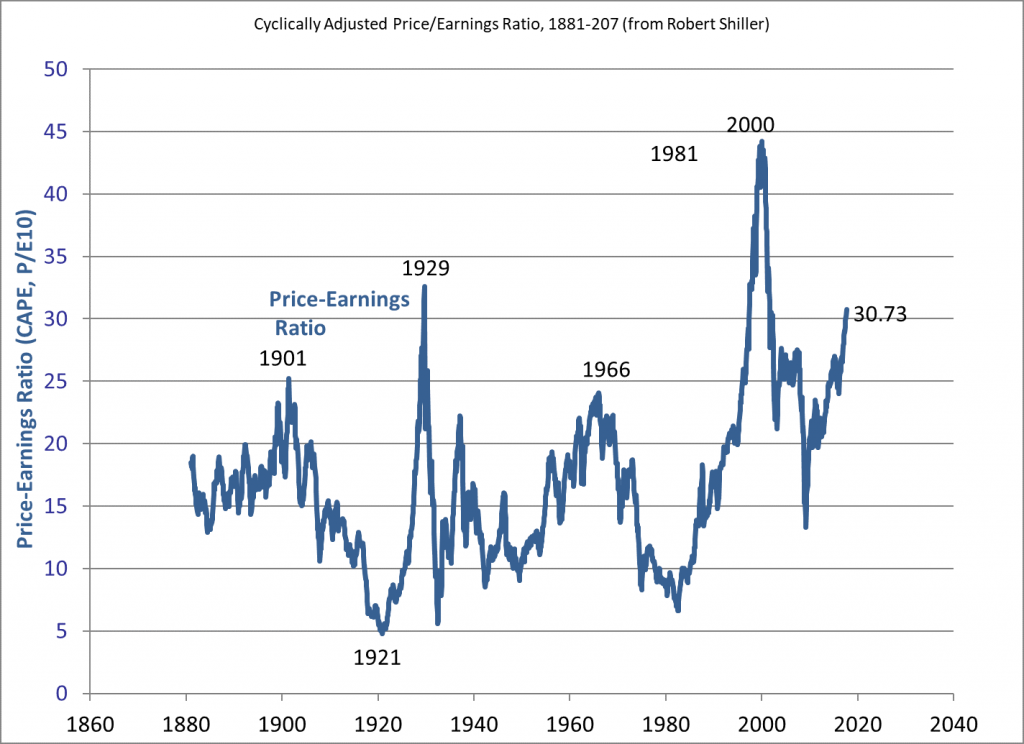 Black swans are not unforecastable

The current risk-on situation is reminiscent of 2006 and early 2007, the last time the VIX was so low. Then too it wasn’t hard to draw up a list of possible sources of crises. One of the obvious risks on the list was a fall in housing prices in the US and UK, given that they were at record highs and were also very high relative to benchmarks such as rent. And yet the markets acted as if risk was low, driving the VIX and US treasury bill rates down, and stocks, junk bonds, and EM securities up.

When the housing market indeed crashed, it was declared an event that lay outside any standard probability distribution that could have been estimated from past data, supposedly an example of what was variously declared to be Knightian uncertainty, radical uncertainty, unknown unknowns, fat tails, or black swans. After all, “housing prices had never fallen in nominal terms,” by which was meant they had not fallen in the US in the last 70 years. But they had fallen in Japan in the 1990s and in the US in the 1930s. This was not Knightian uncertainty, but classical uncertainty with the data set unnecessarily limited to a few decades of purely domestic data.

In fact the “black swan” analogy fits better than those who use the term realize. Nineteenth-century British philosophers cited black swans as the quintessential example of something whose existence could not be inferred by inductive reasoning from observed data. But that was because they did not consider data from enough countries or centuries. (The black swan is an Australian species that in fact had been identified by ornithologists in the 18th century.) If I had my way, “black swan” would be used only to denote a tail-event that could have been assigned a positive probability ex ante, by any statistician who took the care to cast the data net widely enough, but that is declared “unpredictable” ex post by those who did not have a sufficiently broad perspective to do so.

Why do investors periodically under-estimate risk? There are specific mechanisms that capture how market analysts fail to cast the net widely enough. The formulas for pricing options require a statistical estimate of the variance. The formula for pricing mortgage-backed securities requires a statistical estimate of the frequency distribution of defaults. In practice, analysts estimate these parameters by plugging in the last few years of data, instead of going back to previous decades, say the 1930s, or looking at other countries, say Japan. More generally, there is a cycle described by Minsky whereby a period of low volatility lulls investors into a false sense of security which in turn leads them to become over-leveraged, leading ultimately to the crash.

Perhaps investors will re-evaluate the risks in the current environment, and the VIX will adjust. If history is a guide, this will not happen until the negative shock – whatever it is – actually hits and securities markets fall from their heights.