If one was looking back at the data available a half a decade ago, an observer (not me) might have concluded that there was a hiatus in per capita output that signalled an end to growth. 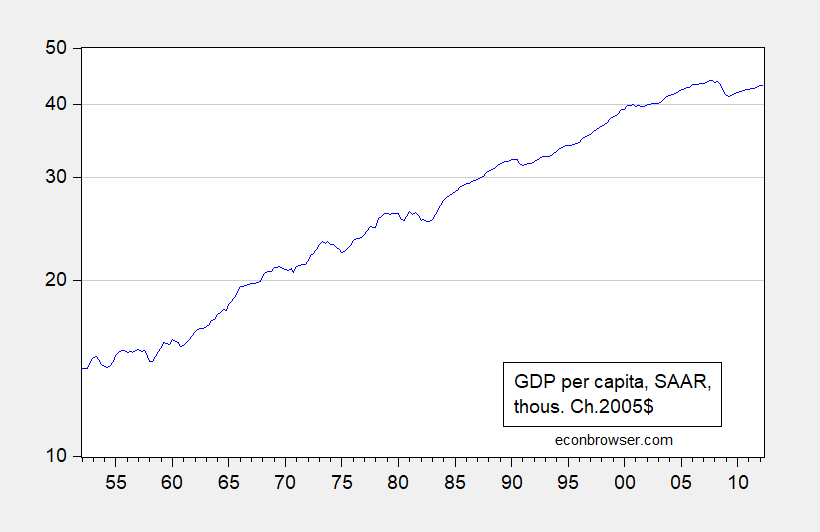 Figure 1: GDP per capita in thousands of Chained 2005$, SAAR, as of September 28, 2012, calculated using GDP and population reported at that date. On log scale. Source: St. Louis Fed ALFRED, and author’s calculations.

This is an analogue to the argument set forth by those who asserted the lower temperatures after 1998 signalled the imminent end of global climate change.

As we know, GDP per capita continued to grow. Here is the graph with the most recent GDP series (today’s release) compared against the 2012 vintage, both normalized to 2005Q=1, on log scale. 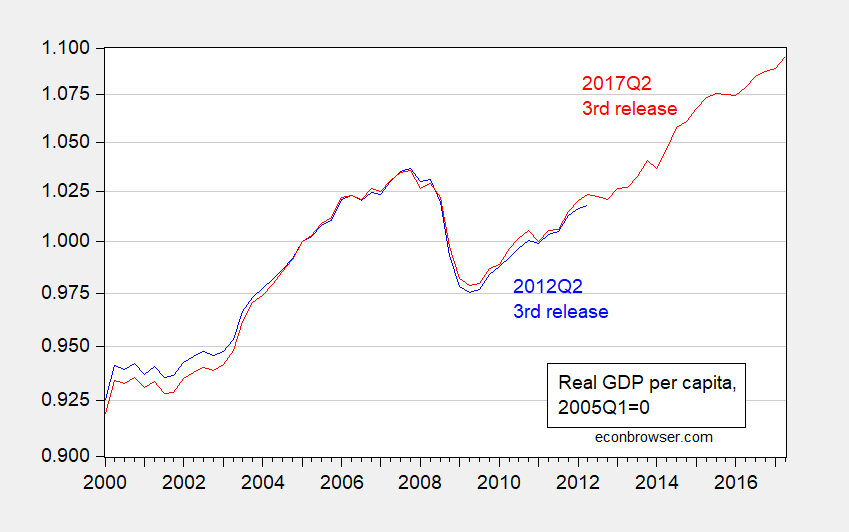 Returning back to the question of whether there was a “hiatus” in global temperatures, here is a conclusion from a relevant paper, published in 2017.

None of the five current observational datasets for [Global Mean Surface air Temperature] GMST shows a negative linear trend for any duration of more than five years starting in 1998 (Fig. 2c and Extended Data Fig. 1). This supports the finding that there was no decadal-scale hiatus when the hiatus is defined as a period having zero or negative trends and starting in 1998 (ref. 37). HadCRUT4, on the other hand, has a negative decadal trend, but only for periods starting in 2001 or later, and lasting for up to 12 years (Extended Data Fig. 1). Differences across datasets are caused by different data sources, calibration of different instruments, homogenization and interpolation in areas without data38 (see Methods). This makes interpreting and understanding the reasons for the differences in the observational datasets more difficult.

Figure 2c is reproduced below: 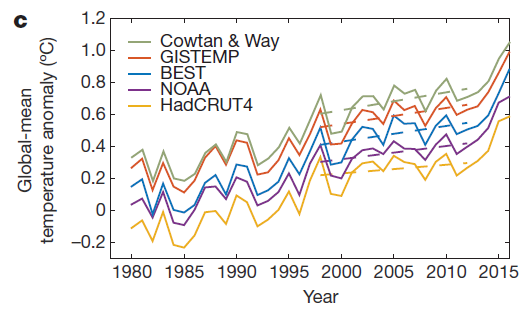 Interesting similarity: using the NOAA global temperature anomaly, the 0.61 degree c recorded in 2002 was only slightly less than the 0.67 degree c in 1998 which climate change skeptics focus on (the 90% confidence interval is +/- 0.8 degrees c). That’s a four year “hiatus”. It took six years for per capita GDP to exceed the prior peak.