Gavin Ekins argues that it’s Time to Shoulder Aside “Crowding Out” As an Excuse Not to Do Tax Reform. From the introduction:

Government budget deficits do absorb a portion of national or global saving, diverting the saving from supporting private investment. This is known as “crowding out.” However, saving is flexible both in magnitude and where it is invested. It can grow as household income increases and move in response to higher borrowing needs and higher returns to investment. Much of a tax reduction feeds directly into saving, especially cuts in business taxation. Furthermore, the United States is an open economy closely integrated with world financial markets. Even relatively large budget deficits are dwarfed by huge levels of global saving. It takes only a minute change in interest rates to attract additional risk-averse world saving to the United States.

Consequently, government budget deficits have only a small effect on private investment.

I agree that the effect on investment is likely to be small, under current macroeconomic conditions of ample foreign savings, and low capital barriers. However, I think “crowding out” is more properly construed as the reduction of interest sensitive components of aggregate demand — and this includes net exports. That’s a conventional treatment; consider Robert E. Hall and David Papell’s Macroeconomics textbook (2005, p.242) for instance (algebra here).

The estimates I obtained for industrial countries in a period extending up to 2015 indicates that each one percentage point of GDP increase in the budget balance results in 0.5 to 0.6 percentage points increase in the current account balance. So (since for industrial countries the current account equals the inverse of the private financial account) global savings can finance the budget deficit — but this implies substantial crowding out of net exports.

I depict two episodes of US budget deficits and trade deficits. 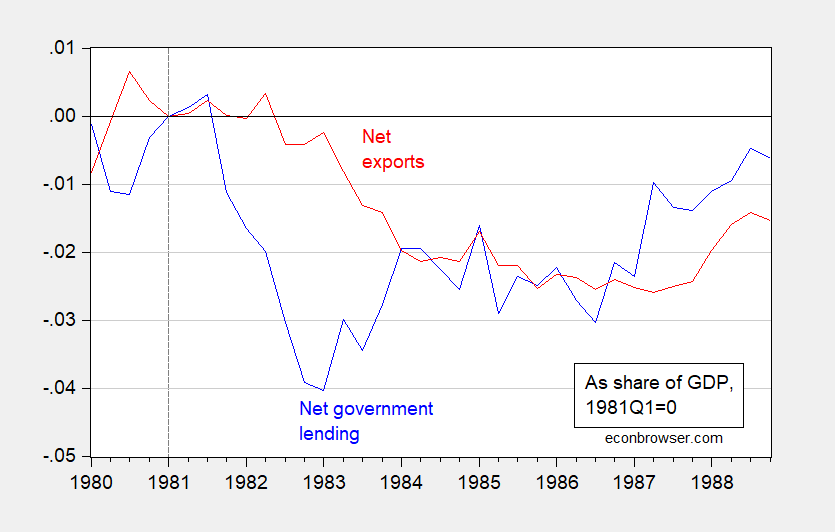 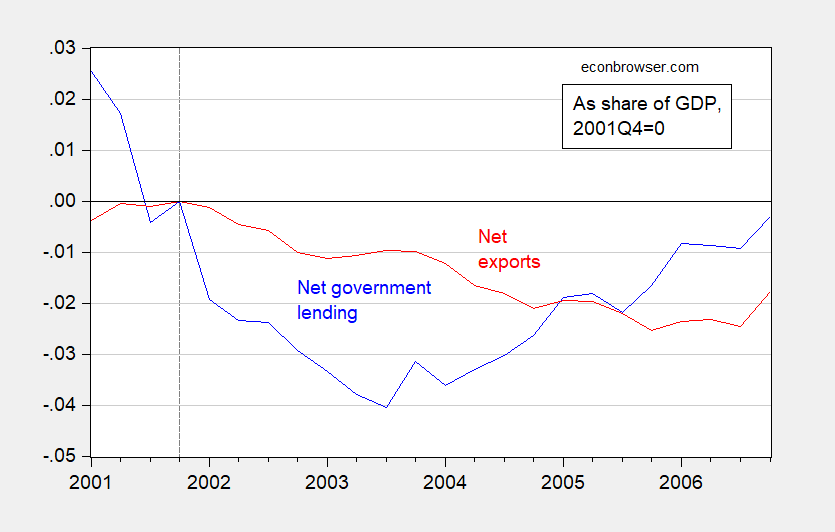 Ballpark estimates. Suppose the tax cuts reduce revenue by $1.5 trillion over ten years, so the deficit increases by $1.5 trillion relative to baseline (not relative to current policy, so this is conservative). $150 billion is about 0.8 percentage points of GDP in 2017Q3. I can see roughly 0.4-0.5 percentage points of GDP deterioration of the current account.

Note that the deterioration in the current account implies accelerated erosion of the US net international investment position, so that the US has to pay more of its income to foreign residents. (This is Krugman’s point — instead of reducing investment over time and hence the capital stock, we accumulate debt to the rest of the world, so that we retain less of the income generated by production, i.e., GDP and GNP deviate).

Of course, maybe the intention is to sell off the country to foreigners…

35 thoughts on “Defining Crowding Out in an Open Economy”