A few years ago, most economic models presumed that interest rates were subject to a lower bound of zero. Why lend a dollar to someone who only promises to pay you back 99 cents, when you could just hold on to the dollar yourself? But we now have several years of experience from Sweden, Denmark, Switzerland, Japan, and the European Central Bank in which the central bank successfully induced negative interest rates in hopes of stimulating a greater level of spending on goods and services. We have enough data now to take a look at how much that seems to have accomplished, and update my earlier discussion of this topic.

First, it’s useful to understand how the central bank could bring about negative interest rates. Consider for example the European Central Bank. Traditionally the ECB would set two interest rates: a deposit interest rate that the ECB pays to banks on excess reserves held overnight in the banks’ accounts with the ECB, and a marginal lending rate at which banks could borrow overnight from the ECB. The deposit rate would usually set a lower bound on the interest rate at which banks would offer to lend to each other– why would I lend to another bank at 2.5% if I can get 3% on my ECB deposits, which are in effect an overnight loan from my bank to the ECB? The borrowing rate likewise sets a ceiling– why borrow from another bank at 5.5% if the ECB will give me all I want at 5% through their lending facility? The graph below shows how this system worked historically, with the interest rate on 3-month loans between banks moving within the corridor specified by the ECB. 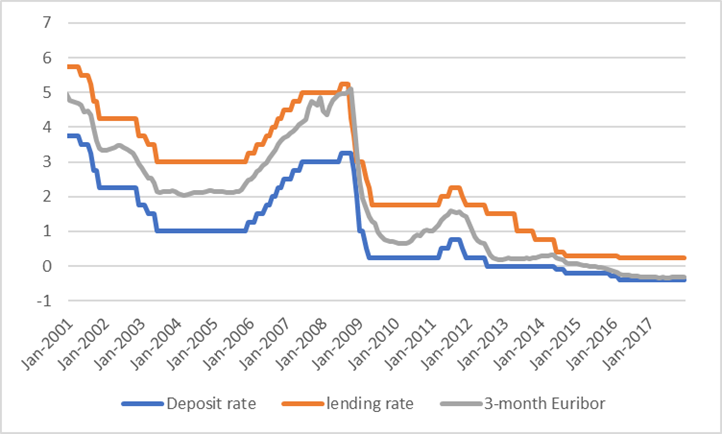 Average interest rate over the month on 3-month interbank loans (in gray) and end-of-month values for ECB deposit rate (in blue) and lending rate (in orange), January 2001 to December 2017.

The ECB brought its deposit rate all the way to zero in July 2012. When that didn’t seem to be enough, they went to -0.1% in June of 2014, in other words, charging banks a fee (corresponding to a 0.1% annual rate) on their deposits held in excess of requirements. By March of 2016 the ECB had brought the deposit rate all the way down to -0.4%, where it still stands today. Here’s a more close-up view of the most recent data. It’s functioned just like the historical system, with banks lending to each other at a rate that is somewhere between the deposit rate (currently -0.4%) and lending rate (currently +0.25%). The average rate on interbank loans for December turned out to be -0.33%. 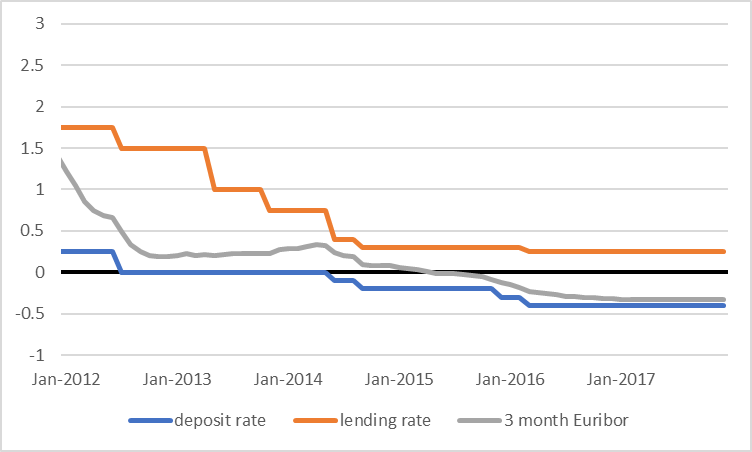 Average interest rate over the month on 3-month interbank loans (in gray) and end-of-month values for ECB deposit rate (in blue) and lending rate (in orange), January 2012 to December 2017.

But why would my counterparty agree to the deal? It’s actually the same reason that the interbank rate traded above the deposit rate in normal times. Whether I pay interest or receive interest on my deposits with the ECB, these accounts are useful in their own right for a number of other reasons. Banks use them to make or receive payments from other banks throughout the day, and I never know for sure whether I’m going to end up with more than I need. Another dollar in deposits could well end up costing me another 40 bp, but given other benefits of having the deposits, the true opportunity cost is more like 33 bp.

Here for example is an update of the analysis by Asterland et al. (2015) of various interest rates in Sweden, where the central bank has held its policy rate at -0.5% since March 2016. The interest rates on 2-year government bonds and even 2-year mortgages are now both negative. 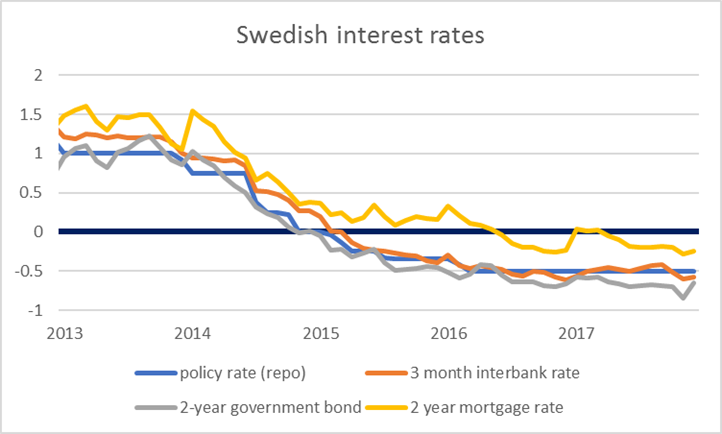 But some interest rates are harder to push into negative territory. The experience in these countries has been that banks are reluctant to start charging customers for the privilege of making deposits in the bank, for fear of losing those deposits as a future source of funding. Banks that don’t charge fees are then losing money on those accounts in the current environment. A negative interest rate policy may thus decapitalize the banks at a time when maintaining the health and stability of financial institutions could be an important policy goal. 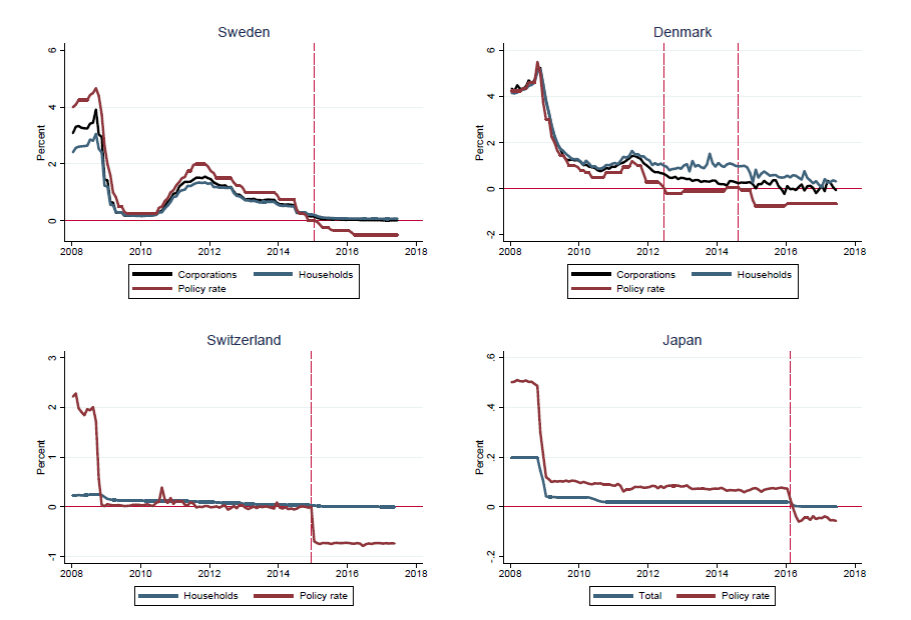 Policy rates (in red) and household and corporate bank deposit rates (blue or black) for Sweden, Denmark, Switzerland, and Japan. The policy rates are defined as the Repo Rate (Sweden), the Certificates of Deposit Rate (Denmark), SARON (Switzerland), and the Uncollaterized Overnight Call Rate (Japan). The red vertical lines mark the month in which policy rates became negative. Source: Eggertsson, Juelsrud, and Wold (2017).

A recent paper by Eggertsson, Juelsrud, and Wold (2017) found that changes in the central bank’s policy rate have a much more limited pass-through onto customer deposit and lending rates once the policy rate becomes negative. Using detailed data from Sweden, for example, they found that banks that had historically depended more on customer deposits had significantly lower growth in loans extended after the policy rate became negative. Heider, Saidi, and Schepens (2017) found the same was true of Euro Area banks. Eggertsson, Juelsrud, and Wold (2017) developed a theoretical model in which reductions in the policy rate significantly below zero could actually be contractionary, leading to a decrease rather than an increase in overall spending.

Moreover, there are limits to how negative rates can go before cash hoarding begins to replace traditional banking. Maybe the central bank can get to -0.5%, but -1.5% could be more of a challenge. If all we could do is bring the policy rate from 0 down to about -0.5%, then even if there was 100% pass-through, the practical stimulus from bringing borrowing rates another 50 bp lower may be limited, particularly in an environment where pessimism rather than a perceived cost of borrowing is the biggest factor holding back investment spending. Indeed, a key goal of central banks in these situations is to try to contribute to expectations of a more robust economic recovery once interest rates go back to positive territory. It’s not clear that setting a negative interest rate today works well in practice for purposes of achieving that goal.

The Fed was understandably reluctant to use negative interest rates as a policy option during the recent episode of economic weakness.