A sequel to my rebuttal to an anti-log manifesto:

Reader Ed Hanson:, commenting on my use of correlation coefficients in analyzing economic policy uncertainty comovements.

My lessen 1 is the danger to statisticians who try to create more precision from the dat than actually exist. Just because you can calculate a number does not mean that number has precision. In other words, Menzie, you are attempting to get more precision out of the Index than actually exist. My visual and general note of spikes of uncertainty has more meaning and correlation than your over mathematical treatment which feigns accuracy.

It is an easy refuge for people to criticize statistical analysis as “lies, damn lies, and statistics”. However, in doing statistical analysis on economic policy uncertainty indices, I think it is useful to distinguish between the data series themselves, and moments of the series data sample (text edited 6:33PM).

First, the EPU is compiled (roughly speaking) using occurrences of the words of “economic”, “policy” and “uncertainty” from newspapers, normalized by total words. One can take issue with the creation of these indices, in terms of there coverage, in terms of normalization, whether the numerical tabulation is representative of actual economic policy uncertainty (I leave it to Baker, Bloom and Davis (2016) to make the case). It’s the use of correlation coefficients to summarize comovement that exercises Mr. Hanson.

So, second, let’s look at the idea of measuring comovement. The Pearson correlation coefficient I cited is estimated as:

Still, as a summary of how two observed series comove, the correlation coefficient is useful.

Now, I could be faulted for not reporting statistical significance, with respect to some interesting null, like ρ=0. Below I show a correlation table with t-stats, for EPU’s over the 2016M01-2018M03. 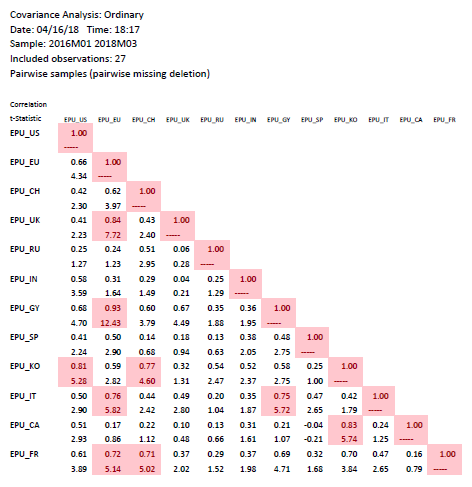 Notice every case where the ρ exceeds 0.707 (consistent with R2 in bivariate context of 0.5), the t-statistic exceeds (in absolute value) 2, signifying statistical significance at the 95% level.

The data are plotted below. 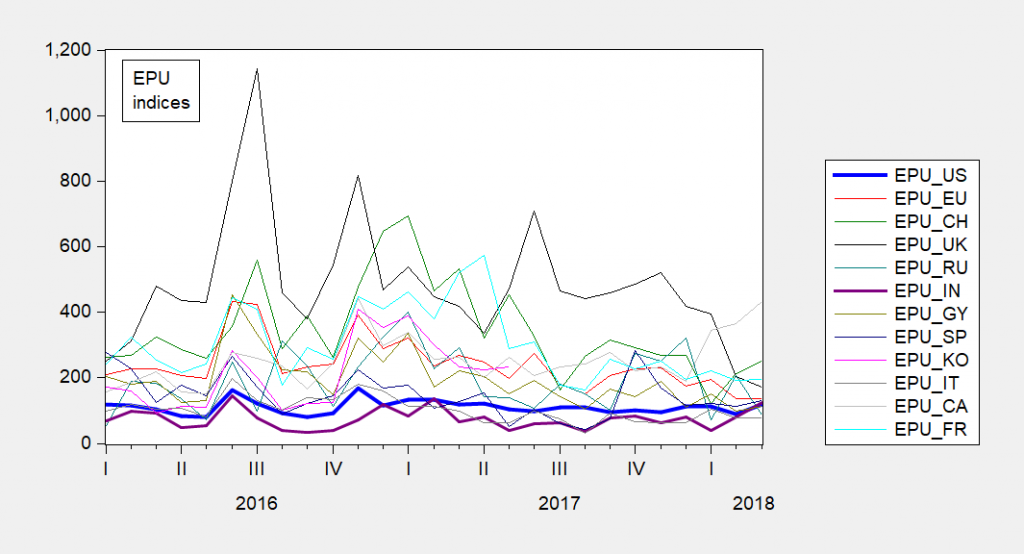 For instance, if there is a high correlation regime and a low correlation regime, then one should use a regime switching procedure (e.g., a Markov-switching procedure). Of course, once again, one would be estimating coefficients which might yield the feeling of precision … to those who are unaware of the uses of statistical analysis. But this is more likely the right way to proceed if one has the feeling that looking at “spikes” is the way to go.

In any case, the use of correlation coefficients, in the hands of an informed analyst, seems to me a helpful way to summarize the comovement of variables, and does not necessarily lead to an over-estimate of precision in and of itself.