The European Central Bank (ECB) was set up as the most independent of all central banks. Its independence also made it unaccountable. Freed from public accountability, the ECB’s decisions have been swayed by its management’s ideological preferences and by national interests. The consequence is that some eurozone countries are now subject to long-term deflation risk and are locked into a currency that is too strong for their economies.

In 1991, when European negotiators met in Maastricht to decide on Europe’s single currency, two matters were uncontroversial: a future ECB would act independently of political oversight, and its only goal would be to fight inflation. These were German requirements for giving up the deutsche mark and joining the single currency. The French were unhappy but knew that if they demanded greater oversight of the ECB or required that it also boost employment, the Germans would walk away. All other countries fell in line.

In March 1997, twenty-two months before the euro’s launch, Paul Volcker, former chairman of the U.S. Federal Reserve board, cautioned against the ECB’s hyper-independence. “No central bank,” he said, “could be comfortable … operating entirely outside a political context”; in a democracy, a central bank “must be able to justify its policies to the general public and to political leaders.”

Commentators paid less attention to the ECB’s exclusive focus on controlling inflation rather than balancing—as the Fed does—the dual objectives of stimulating employment while keeping inflation under check. But two Nobel laureates, Franco Modigliani and Robert Solow, warned that an obsessive focus on price stability would keep interest rates too high, which would reduce the pace of GDP growth and, hence, elevate unemployment rates. That is precisely what happened. With no public accountability, the ECB repeatedly sacrificed growth and employment, even triggering a financial crisis in July 2011, as I document in my forthcoming book, EuroTragedy: A Drama in Nine Acts.

The contrast between the ECB and the Fed emerged early. In March 2000, after the tech bubble burst, the U.S. economy slowed, which put a damper on world trade and, hence, on the eurozone economies since they depend heavily on international trade. Although the initial downturn was modest, the U.S. Fed applied the risk-management principle, and began aggressive reduction in interest rates. The American economy, Fed Chairman Alan Greenspan said, was “in the position of the person falling off a 30-story building and still experiencing a state of tranquility at 10 floors above the street.” The policy task was to build a monetary safety net to cushion the fall.

When global economic prospects suffered further after the 9/11 attacks, the economic woes were acutely felt in the eurozone. But while the Fed kept up rapid rate cuts, the ECB emphasized its inflation-fighting goal and eased interest rates at a glacial pace. Facing calls for more monetary stimulus, ECB President Wim Duisenberg infamously said, “I hear, but I don’t listen.” Predictably, recovery in the eurozone was considerably slower than in the United States (Figure 1). 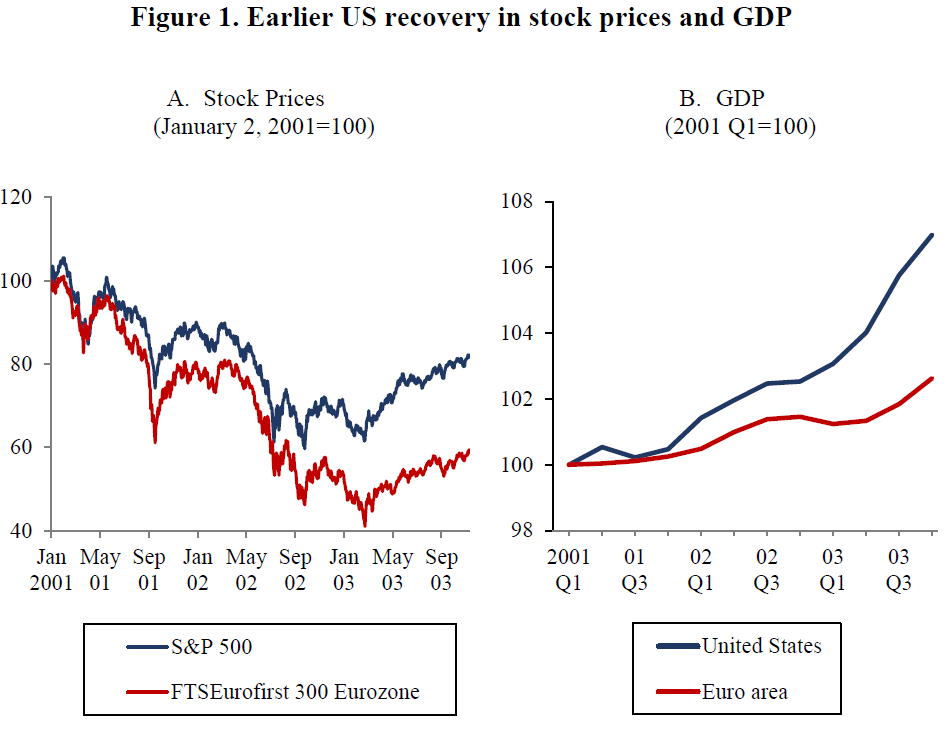 The same pattern repeated after the onset of the global financial crisis in July 2007. Some observers believe that the Fed unconscionably delayed stimulative measures. But once it initiated interest rate cuts in September, the Fed moved rapidly. Janet Yellen, then president of the Federal Reserve Bank of San Francisco, articulated the risk-management philosophy. “I honestly don’t know what the risks are,” she said, but the financial disruptions could generate “negative, non-linear dynamics.” Translation: things could get ugly quickly.

The ECB, under President Jean-Claude Trichet, acted in a starkly contrasting manner. Although growth and inflation trends were virtually identical in the United States and the eurozone, and although financial stress in the eurozone was at least as great as in the United States, the ECB’s first policy action was to raise interest rates in July 2008. Only after a near global financial meltdown following the Lehman Brothers bankruptcy in September 2008 did the ECB grudgingly agree to reduce its interest rate as part of a globally coordinated rate reduction.

After the Lehman episode, the Fed continued rapid monetary easing, bringing its policy rate down to near zero by December 2008, at which time it also introduced its first bond-buying quantitative easing (QE) program, designed to rapidly bring down long-term interest rates. The ECB’s plodding rate reductions were lampooned by financial markets as other central banks, especially the Bank of England, acted at a blazing pace.

The outcome mirrored that in 2001–2003: the Fed’s stimulative policy helped the U.S. economy recover more rapidly from the global financial crisis (Figure 2). 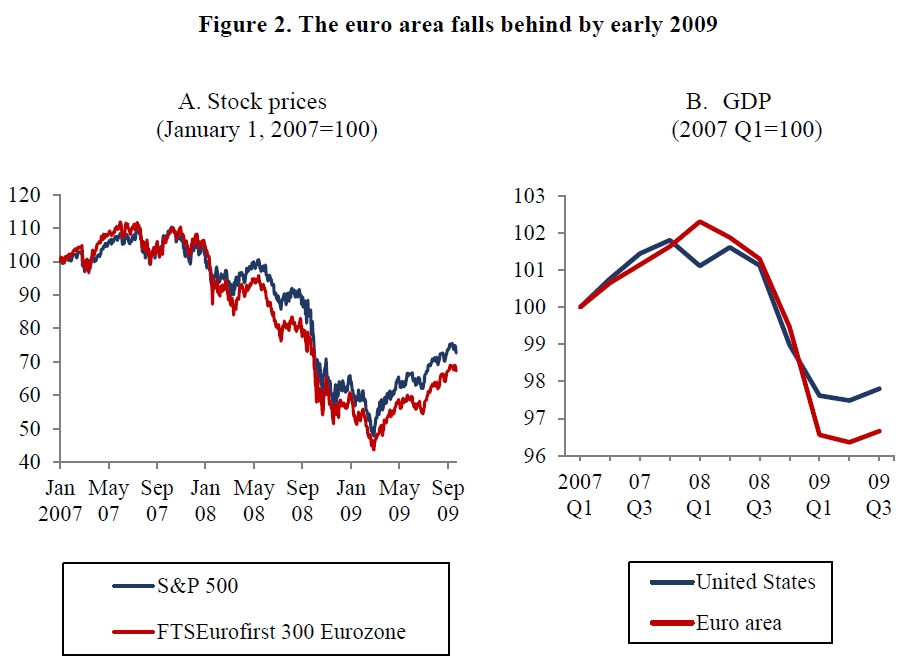 The next phase marked an even starker divergence between the Fed and the ECB. Starting in late 2009, pulled by a massive fiscal and credit stimulus in China, the global economy began to recover. Chinese demand also caused a spurt in commodity prices, which stoked a rise in global inflation rates. The Fed recognized that this inflation spurt was temporary. Indeed, Fed Chairman Ben Bernanke worried that the still high unemployment rates would cause price deflation, which would make debt burdens harder to shoulder and, hence, weaken the economic recovery. Now applying the risk-management principle to preventing deflation, the Fed announced a second round of QE in November 2010.

The ECB did the opposite. Observing the same inflation trends, the ECB raised its policy interest rate in April and then again in July 2011. These actions had near-catastrophic effects. Banks throughout the eurozone came under acute stress. In Italy and Spain, a sovereign-bank “doom” loop was triggered: the risk that weak banks would need government support created a fear that the governments themselves would be unable to honor their obligations, which amplified the anxiety that banks would default on their debts.

In November 2011, Mario Draghi replaced Trichet as the ECB’s president. The ECB reversed the Trichet rate hikes. But eurozone monetary policy was still too tight, and the promise of more monetary easing was not matched by further action through mid-2012. The eurozone financial crisis continued to spiral out of control. Italian and Spanish interest rates soared, and the governments and banks in the two countries seemed at imminent risk of default. Mario Draghi then declared that the ECB would do “whatever it takes” to prevent a eurozone implosion. Interest rates fell and the sense of crisis passed. But real interest rates—the nominal interest rates governments and businesses pay minus national inflation rates—remained positive and large in Italy, Portugal, and Spain. Businesses held back investment, and recessionary conditions continued not just in these financially vulnerable countries but through much of the eurozone.
This prolonged period of crisis and recession took its toll, and by mid-2013 the eurozone began to fall into a deflationary zone. The core inflation rate—the inflation rate stripped of volatile food and energy prices—remained above 1.5 percent in the United States but began to fall toward an average of 1 percent in the eurozone. Yet, held back by German and other “northern” eurozone member country representatives, the ECB continued to delay QE. Inflation rates fell even in Germany, but—in its bid to fight a phantom inflation threat, the ECB created an actual deflation risk in Italy (Figure 3). 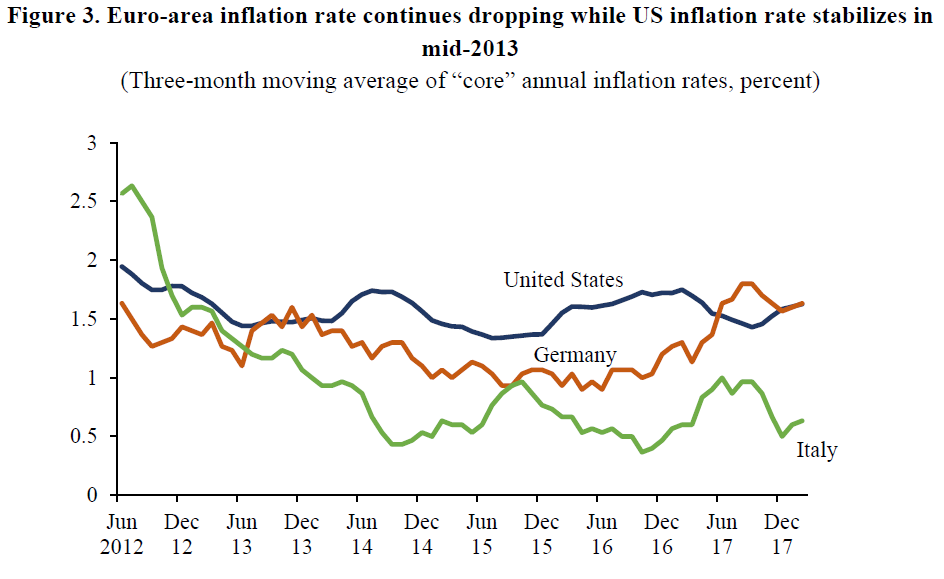 Finally, in January 2015, with the average eurozone inflation rate stuck around 1 percent, the ECB began its QE program, six years later than the Fed. The ECB was now in a situation like that of the Bank of Japan (BOJ). The BOJ had long deployed half-hearted and short-lived monetary stimulus measures. As a result, businesses and consumers had begun to expect that prices would remain relatively flat. Once inflation expectations fell, it became rational to postpone expenditures believing that inflation might fall further, which kept inflation low and reinforced the sense that inflation would remain low. Even the massive monetary stimulus injected by the BOJ beginning in January 2013, under the “Abenomics” program to recharge the Japanese economy, could do little to raise the inflation rate.

Not surprisingly in view of the BOJ’s experience, despite continuing large bond purchases by the ECB, the eurozone’s average core inflation rate remains around 1 percent. This average hides a wide divergence across member countries. While Germany, with its stronger recovery, has regained a core inflation rate of around 1.6 percent, the inflation rate in Italy is in the 0.5–0.7 percent range.

Hence, Italy’s real interest rate is still above 1 percent, which, with its chronically weak economy, will act as a significant impediment to renewal of investment and growth. The Italian government’s debt is above 130 percent of GDP; Italian banks are still dealing with large volumes of non-performing loans. Italy is the eurozone’s fault line. By bequeathing to Italy a high real interest rate, the ECB has ensured that the tremors along the Italian fault line could easily morph into widespread financial crisis.

Moreover, financial markets have come to expect an ECB bias toward tight monetary policy, which has ensured a rising euro exchange value. Despite the ECB’s huge QE, the euro’s effective exchange rate is back around its level in mid-2007 (Figure 4). At that level, the euro is definitely too strong for Italy, exacerbating the country’s woes.

The ECB has never been called on, and has never offered, to give a reasoned explanation of its delays and half-measures, or even its egregious error in July 2011. Its lack of accountability has placed it between a rock and hard place. If the ECB winds down its QE, real interest rates will rise, which will increase Italy’s financial fragility. If the ECB extends its QE program, it will accumulate more Italian bonds at high prices and face the risk of large losses when it eventually sells them. The burden of those losses will then be borne by German and other eurozone taxpayers. Either way, the ECB is at risk of feeding the eurozone’s political fissures, which could quickly lead to widespread and far-reaching financial instability. 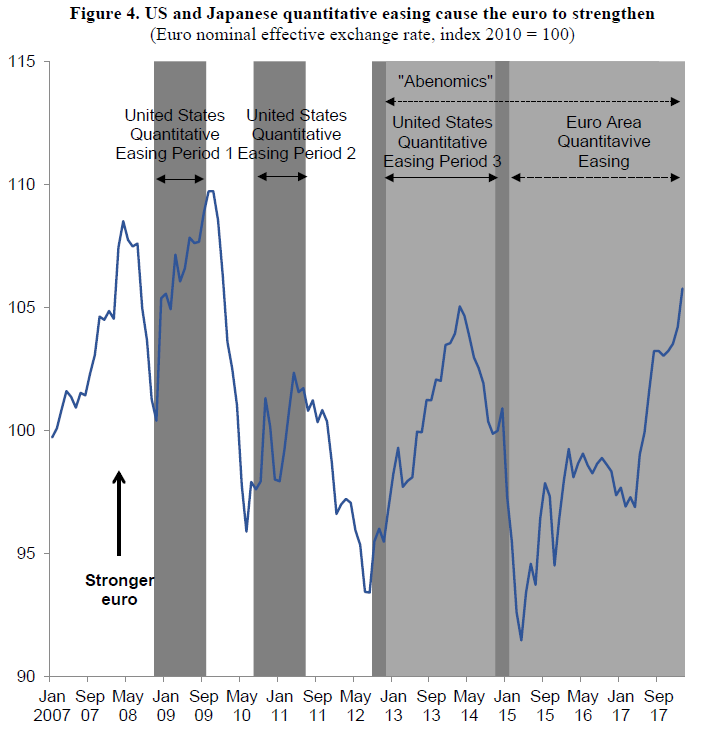 10 thoughts on “Guest Contribution: “The European Central Bank’s Lack of Accountability Has Consequences””