Today we are fortunate to have a guest contribution by Helen Popper, professor of economics at Santa Clara University.

That is the question David Parsley and I examine in a recent working paper. We group states based on their voting records in national elections. Then, we use standard methods to determine whether the Blue and Red economies are in sync, and we take a look at how the states share their economic ups and downs.

We first look at whether the GDPs of Blue and Red states move in step with each other. Figure 1 shows the synchronization of their economic growth rates. 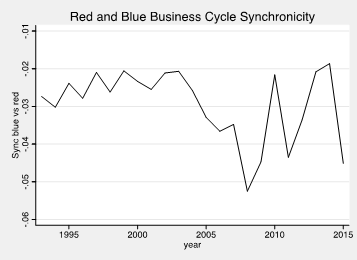 After a slow, modest rise in synchronization at the end of the last century, Blue and Red states’ growth rates diverged markedly as the new century began. They only briefly synched up a decade ago as both Blue and Red states contracted along with the rest of the global economy, then they again diverged. At their current divergence of well over four percent, Blue and Red economies are now more than twice as out of sync as typical international pairs of advanced economies; and they are much more out of sync than they were a generation ago. (For the international numbers, see Kalemli-Ozcan, Papaioannou, and Peydró, 2013). 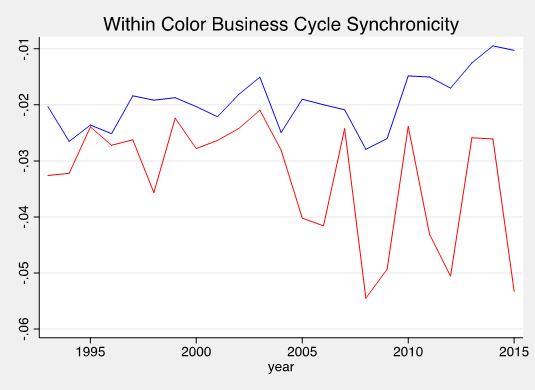 Does that mean they are like different countries? Not so fast. The fact that the Blue and Red economies don’t move together is not the whole story. Just as members of a family can share income when they earn it at different points in their lives (as when working adults support children or aging parents), regions of a country can share GDP when they prosper at different points in the business cycle. Being out of sync with other states is not the same as being divorced from other states. Finding that Blue and Red economies are out of sync, we also need to look at whether they share their prosperity and how they share it.

States share in one another’s ups and downs in many ways. Individuals borrow and invest across state lines, they typically pay more into the Federal system in good times than in bad, and a few of them move out of states with slow growth into states with more vibrant economies. Figure 3 shows how Blue and Red states use channels like these to smooth out the idiosyncrasies in individual states’ economic growth. 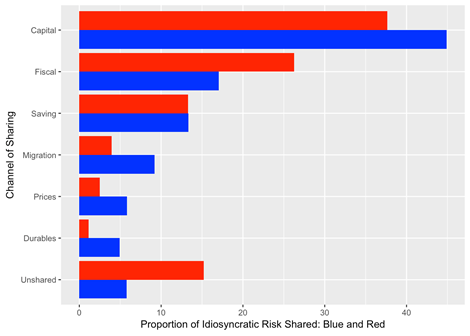 As shown in the first pair of bars, the principal way that states share their ups and downs is through the movement of financial capital across state lines: states smooth roughly forty percent of their idiosyncratic changes in GDP through capital markets. The second most important smoothing channel comes from the Federal government, which smooths somewhat more in Red states (26 percent) than in Blue ones (17 percent). While there are some differences in the other channels, what stands out most is the proportion of idiosyncratic growth that is shared, or not shared, overall: The bottom pair of bars shows that Blue states share all but 6 percent, while Red states are left with 15 percent unshared. That is, Blue states share 94 percent of their idiosyncratic changes in GDP, while Red states share 85 percent. While the difference is large and significant, they both share much more than is typically shared across the international borders of distinct countries. Blue states and Red states both share the vast bulk of their idiosyncratic changes in GDP, but even closely tied countries, such as those in the Eurozone, share less than half of theirs. (See Cimadomo, Hauptmeier, Palazzo, and Popov, 2018.)

The details of this work (as well as additional information for swing states and for the United States as a whole) can be found in the working paper, but the upshot is the same as what is presented here: the Blue and Red economies are indicative of a united country, not a divided one. Yes, Blue states and Red states’ economies differ; true, their GDPs are out of sync, and they rely on different channels to smooth them; but, they do smooth them across the states. Blue states and Red states are still part of the same, single United States, and they share their ups and downs, even across the political divide.

28 thoughts on “Guest Contribution: “Red and Blue: One Country or Two?””