Taxes announced, proposed, on Chinese imported goods. Or, shoot yourself in the foot edition. 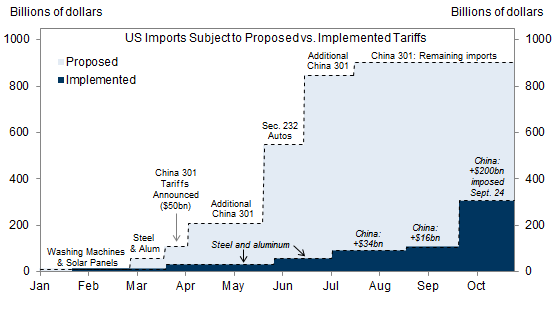 What are the likely macro impacts. On output, minor, unless stock markets take a dive. On the other hand, consumers will almost certainly face price increases, either relative or general. On a separate matter, I am compelled to note several inaccuracies and omissions (!) in Mr. Pence’s panegyric:

When China suffered through indignities and exploitations during her so-called “Century of Humiliation,” America refused to join in, and advocated the “Open Door” policy, so that we could have freer trade with China, and preserve their sovereignty.

I am tempted to extend my remarks, but I will restrain myself, and merely refer people to this book, among many others. Mr. Pence also omits mention of the Exclusion Laws despite the similarities to the administration’s current immigration control framework.

Don’t get me wrong. I believe we are in a multi-faceted competition with China, but tariffs are an ineffective means of countering Chinese economic misbehavior. Nor is rescinding sanctions on ZTE. Nor are tax cuts when we need to fund a military buildup in the Pacific. In other, it’s not clear the Trump administration really has an intent to oppose China, but rather to whip up xenophobic and other less-than admirable inclinations in the electorate.

71 thoughts on “You Ain’t Seen Nothing Yet”