Today, we present a guest post written by Jeffrey Frankel, Harpel Professor at Harvard’s Kennedy School of Government, and formerly a member of the White House Council of Economic Advisers. 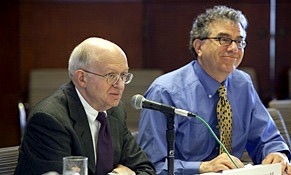 June 13, 2019 — Here in Cambridge, we are reeling from the passing of Martin Feldstein on Tuesday.  He was tremendously influential both as scholar and teacher.  He was also a major policy-maker:  Below, the last section of this remembrance offers some recollections of his time as Chairman of Ronald Reagan’s Council of Economic Advisers.

In addition, remembrances at his funeral service today appropriately emphasized some qualities not known to those who knew of him only as a conservative economist: his generosity and humanity.  He was greatly interested in other people, especially young people.  A personal anecdote.  Once, leaving a conference at Stockbridge, VT, I discovered that somebody else had taken my taxi, leaving me in danger of missing my plane from the airport in Lebanon, NH. Marty and his wife Kate dropped what they were doing and made the 75 mile roundtrip drive to get me to the airport on time.

Marty and the NBER

Martin Feldstein was also remarkable as a builder of institutions, particularly the National Bureau of Economic Research.  When he took over the NBER in 1977, it was a small sleepy outfit in New York City that researched business cycle statistics.  He transformed it utterly into the leading think-tank for economic research by far.  Like the advent of Uber, the new NBER consisted of several innovations rolled into one.

Some observers wondered how a small think-tank in Cambridge, Massachusetts, could turn out thousands of important research papers.  The most innovative of Marty’s ideas was the  that its members would be leading scholars in applied fields who remained employees of their universities spread throughout the country, but who would simultaneously be members of the NBER.  There they interacted with other leading scholars in their field, via working papers, grants, program meetings, and conferences.

One key to the success that Marty had with the NBER was the relentless emphasis on bringing in young scholars.  I refer especially to the annual process for nominating and approving new untenured faculty.  As a result of this visionary ever-greening, the Bureau has avoided the eventual aging problem of some other institutions and stayed at the frontier.

My experience working for Marty at the CEA

In 1983, Martin Feldstein asked me to work for him at the President’s Council of Economic Advisers.  I hadn’t known him well before that, having gone to MIT rather than Harvard. But in the job interview, it turned out that a paper I was writing fit in perfectly with ideas he was developing, and he offered me the job on the spot.  (The idea we shared is that even though the strong dollar of that period had an adverse effect on the US trade balance, this was just a symptom which could not be sensibly addressed without tackling the root problem, which was an excessive budget deficit.  It was a straightforward application of the Mundell-Fleming model, together with an argument that if the fiscal expansion was taken as given, then it was better to spread its crowding-out effects across the traded and non-traded sectors of the economy than to concentrate the damage in the non-traded sector alone.)

I happily took the job as an opportunity to work with Professor Feldstein, who was soon to become “Marty” to me, as to so many others.

During this period, he was the first to popularize the notion of the twin deficits: that the newly swollen US trade deficit was the result of a large budget deficit.  The analysis was an implicit rebuke to those who had foolishly predicted that the tax cuts enacted in 1981 would lead to smaller budget deficits and higher national saving, rather than the reverse.  Others in the White House and the Treasury did not accept our forecast – made in the February 1984 Economic Report of the President — that the trade deficit would continue to rise, let alone our diagnosis as to why.  It made front page headlines when Treasury Secretary Donald Regan responded to a question in congressional testimony by confirming that, so far as he was concerned, the ERP could be “thrown in the trash”.

Personally, I was pleased.  But Feldstein was under enormous pressure, with regular press reports that he was about to be fired. The truth is that President Reagan never said a word to discourage him, either in public or private. (And he was not pushed out of office ahead of schedule, as the press thought.)  But he was outnumbered by others in the Administration and it took a lot of bravery, conviction and principle to stand his ground.  I learned a tremendous amount from him, including how to conduct oneself with integrity in Washington.

A year later, our numerical forecast for the 1984 trade deficit proved to have been right on target.  Years later, Donald Trump and the Congress passed a large corporate tax cut in December 2017.  Marty actually came out in support of that tax cut.  But I felt confident in predicting that the US trade deficit would widen, not narrow as Trump had promised.  After all, I had learned it from Marty.